I think with time he might get commit rights but until then someone has to approve it, the issue is some of his code doesn’t work with Win/Mac and needs to be reviewed & the other Devs are working on their own stuff too, this adds delays to code review.

Pablo has commit rights. There is no exception just for him.
The other day, I asked to antonioyia to correct a bad naming. Although, he agreed ; he had to ask for somebody else point of view.
They are all submitted to same review process.
They decided to be more strict on it to avoid as much as possible to retake too impulsive new concepts in master.

That does not mean that reviewers never miss something and there is no commit reverted.
But there is probably less surprise from developers point of view that way.

That is the first time that in theory, master is not frozen while a release is in bugfixing state.
But in practice, if reviewers are bugfixing 2.81 ; they are not free for reviews, at same moment.
So, there is a high probability that reviews about Pablo’s work will only happen on Bcon4 week of 2.81.
It is a little bit worrying that we are getting closer to 2.81 release and amount of bugtracker reports does not go down or stagnate.

To be fair, BlenderCon wasn’t that long ago, so getting back to working on the bug tracker was delayed for a bit for a bunch of the developers. Brecht who was the primary code reviewer for Pablo also went on vacation. Pablo also has made patches to address bugs, but again, it seems that the other devs are occupied with other stuff to properly review all the features.

The way things are looking right now, I think the developers will have to slightly rethink the way Bcon1 for the next Alpha and Bcon4 for the final Beta are overlapping. Maybe moving the BCon1 two weeks into the start of Bcon4 or extending Bcon1 a bit would allow them to put more time into reviewing the new features and bugs for us Alpha testers to start doing our work before Bcon1 is over.

We may not be coders, but we are an important line of defense for doing quality insurance and finding the most glaring bugs needed to be addressed for the official release. The sooner we get to test the changes, the better.

Haha ofc not. Blender is not ready yet to replace ZB.

It should just be a click and hold and then auto switch back to the brush when you let go.

This is being requested all the time, but there’s no UX dev, so it’s always ignored.
Some apps have this functionality built in their keymap system, blender should do the same, instead of hardcode things.

I also updated it recently to include the 2.81 pivot enchancements. I think that Originie should do what @Musashidan is looking for.

I checked the patch and it seems the Devs are waiting for the new boolean system by Mr Howard ,he said in BConf that it will be ready in a month or two…judging by that then it’s 2.82 if everything goes as planned.

My very first sculpt using Blender new tools and i am quite enjoying working with it. Cheers, mate. Thanks for the heads-up.

I’m just trying out the new sculpt tools and attempting to use the rotate tool to fix the arm position of my model. However, I can’t figure out how to move the manipulator pivot to the elbow (it appears in the center of the model). Can someone explain how to do this as I couldn’t find the info in the docs or 2.81 features page?

I’d actually like to be able to move and rotate the pivot ideally. Not sure if the 3d cursor can be used to align the sculpt cursor…

The gizmo manipulation is terrible at the moment.

Hsve you tried those pivot options? 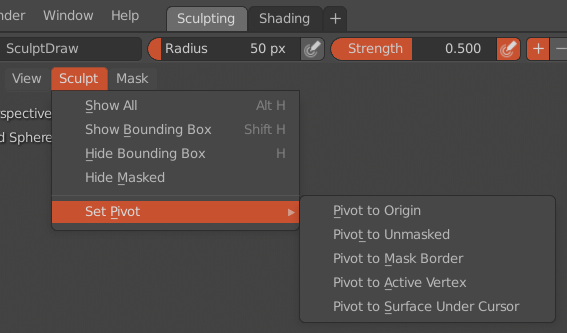 Ah, thanks! It’s insanely fiddly and I gave up trying to get it in the right place (why not set directly from 3d cursor I wonder), but at least the option is there. Hopefully the transform tools will be refined in 2.82, because they seem good, but setting the pivot is just too much of a pain in the ass unless the rotation of it doesn’t matter. It would be nice if there was a key that enabled transforming of the pivot only, similar to the affect origins only option in object mode.

Despite my frustrations with the transform tools, the other stuff in 2.81 is very nice. So many big improvements over the old sculpt tools. I’m looking forward to trying out those new hair sculpting brushes too!

We need direct manipulation of the gizmo/pivot like in zbrush.

The workarounds in blender are just insane.

Honestly this is one of the things I probably hate most about Blender. I would love for them to rehash the whole gizmo-pivot-snapping system to be smarter and with less steps involved. Instead of make it strictly about the sculpting workflow, I’d rather it apply to Blender as a whole.

The vid/gif you show is a great example of what Blender should be aiming for. Easy movement of the gizmo itself in 3D space as part of the native gizmo behavior, not being anchored to a 3D cursor or any of that. In fact the zbrush approach mixed in with Modo’s widget behavior in 3D space would be perfect.

I agree 100%. And that’s what I tried to suggest on devtalk, but it’s nearly impossible to convince some blender folks, they think that working with the 3d cursor is the same thing. Pity.

For the curious ones, ZBrush 2020 is coming soon, with some interesting stuff.

Its something like “manipulator edit mode” in silo. Transformations are applied to the gizmo instead of the selection.

3D cursor (and snap alignment) was a big step forward. Rotate/Move/Scale with cursor pivot could do similar transformations.
Cursor alignment could be changed via snapping. But cursor cant be translated directly.

For the curious ones, ZBrush 2020 is coming soon , with some interesting stuff.

“Some interesting stuff” is a very good recapitulation.

I am once again not very impressed with the new features.

If you’d like to discuss the new ZBrush, you’re invited to my thread about it.

ZBrush 2020 has been announced. The new features can be viewed here:

Look, what we are talking about here and what I showed on that gif is 100% unrelated to the 3d cursor. I don’t get why it’s so difficult to understand that.

We are not looking for workarounds.

The 3D Cursor reliant workflow is largely part of the problem to begin with. It adds too many extra unnecessary steps and something I think, like Blender Internal, messy keymap and the Game Engine needs to be retired in favor of something far better.

If they had to keep in it some form, I’d rather it just turn into a workplane instead.