Hey everyone,
does anybody know a good tutorial to learn how to model with correct topology?

If I want to make a complex model that only consists of quads I always get problems with the topology. When I have to add more faces to get more detail it will always mess up my model. Is there a way of creating extra faces in an area without affecting other areas?

Good topology is kind of its own art with lots of little tricks that come together in the end.

Edge loop reduction is just one component (although an important one). I suggest after reading that article you read the rest of the site as well. The information will prove invaluable.

That’s a good site for topology in general. But I have some more specific questions.

If I work with loopcuts it will always go around the model, so I want to avoid that most of the time.

The link I supplied you with goes to a specific article on that site that deals with edge loop reduction flows. So it offers a way to terminate your loops from having to circumvent the entire model.

I don’t know what else to tell you. Are you really so lazy you did not even open the link and just assumed the information would not be specific enough? Sheesh

I did read the article about edge loop reduction. But I want to make a complex model. I made a example for that. So I have an object where I want to add a specific shape that will be extruded under the surface (see blue circled area). More than 50 verts are needed to get that shape. Maybe I would just draw the shape and then connect it to to surface. Many edges would be necessary to do that. And if I want to add more shapes to other areas even more. So how can I do that if I want to keep quads everywhere? That is actually my problem. If I understand the mentioned article right I would add as many loops as I need. Then I could reduce them. But with that much edges (I would probably need way more than on the sketch) it would take too long to clean all loops like that. Or maybe I just don’t know how to do it right!? What would be the right way to do it? Thanks for posting that picture. That clarifies a lot.

With that in mind my approach to this would be as follows: Here is a short video explaining the steps inside Blender: 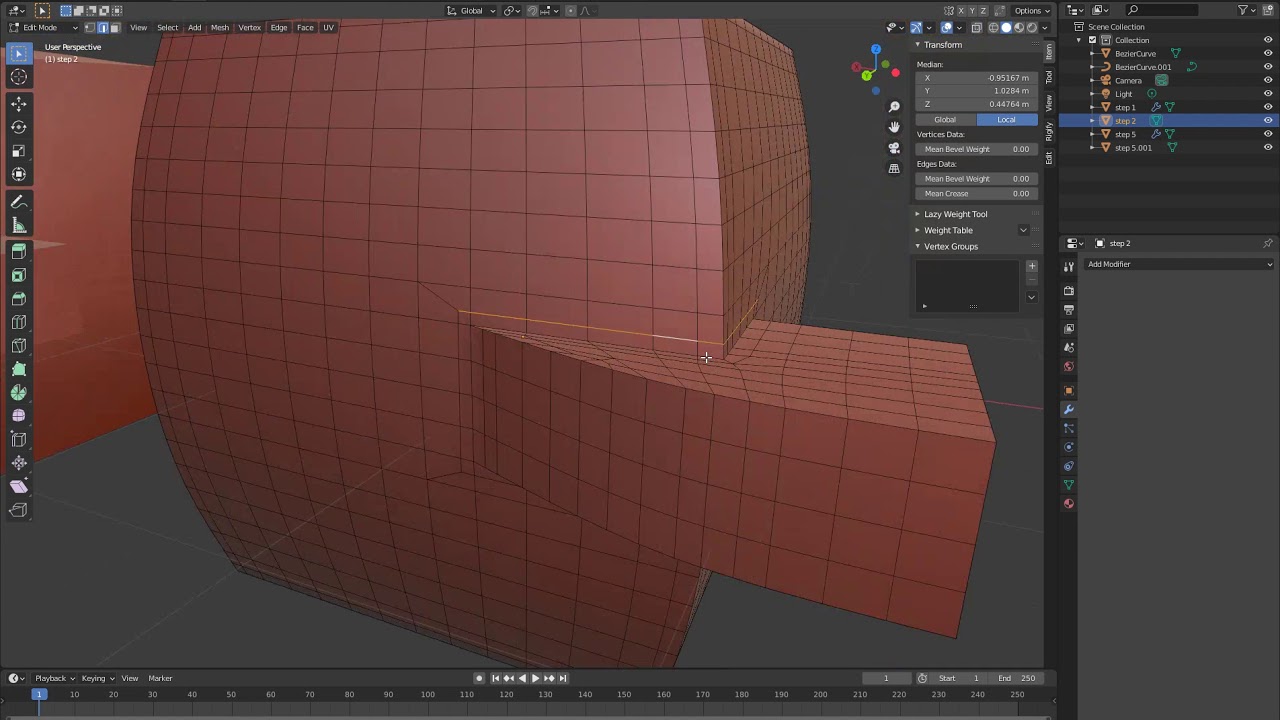 Hope it gives you at least one approach.

Wow. That is really helpful. Thank you for even making a tutorial for that. I think I can do it that way to get that shape. And yes, it is a static object.

Now if I want to fill the shape inside of the object would I just select the edge and fill it, but then I don’t have quads anymore. Do I even need quad topology if I make a static object?

If you want to fill the shape I would do this:

Now you have an inner surface. I prefer this over the method you suggested because if you fill the hole again with grid fill it won’t retain the curvature of the original shape. An alternative option would be that after the knife cut you don’t delete the inner faces but instead you extrude them. This would give you a similar effect but I think my suggested method is a little more flexible.

To answer your question on quads. No, you don’t need quad topology for a static object. It just needs to look good and shade well.

With subd modelling you can think of two paths that overlap but are not entirely the same:

Deforming a lower resolution mesh is fast but looks crap. Using a live subd modifier gives you a way to animate “low res” but render in high res. This is the most demanding when it comes to your topology. Not only does it have to look good with subd on BUT it ALSO has to look good when it deforms which brings in extra requirements.

When people think strictly about subd topology rules they are thinking of this category most of the time.

There is a lot of overlap between the topology rules fore these two categories however there are things you can do with a static mesh that you can’t for an animated one. For example you can make use of polygons and poles > 4 edges when you KNOW a certain surface is 100% flat. This results in you having the option to terminate edgeloops on flat surfaces without shading errors. This is something you obviously can’t do for a deforming mesh since the surface will go from flat to curved and shading errors will occur.

You can also use subd modelling as an intermediary step to get a base mesh that you will then alter by destructive modeling methods as we did here. If you look at the contour of the holes we cut you will see lots of polygons that are not quads. This is fine as long as the mesh shades well (and it does because there is enough overal resolution to the mesh).

With that said its important to note that a lot of the general rules of topology don’t just apply to deforming meshes. If you want the subd modifier to subdivide and smooth your mesh nice and evenly the best way is still to have mostly quads and really nice evenly spaced edges. Even when you apply the modifier after the result will be nicer.

So… big wall of text but hopefull it gives you some context. Glad to hear this helped you!

So finally I have something done, but I it’s not working like it should. I tried to use this method to make a camera. Which took quite some time for me, because I basically had to figure out how to do it.

I used subdivision modeling to create the camera and it worked pretty well to get the overall shape. I used knife project on the back of the camera to cut the area that gets extruded inside. First I tried to duplicate and move along normals but in that case it didn’t work because of the shape of the extrusion that shouldn’t go just straight inside. So I just extruded it but that lead to shading issues. There are also some more on the front side.