Here is a comparison between my dinosaur and the dinosaur from the movie king kong. If you look closely, you can see one major difference. Mine looks like crap compared to the king kong version. What types of things do I need to do to make my model look as good as theirs? I’ve seen some Blender artwork that looks incredible. So I know it can be done. I’m struggling still to figure out what I’m doing wrong. 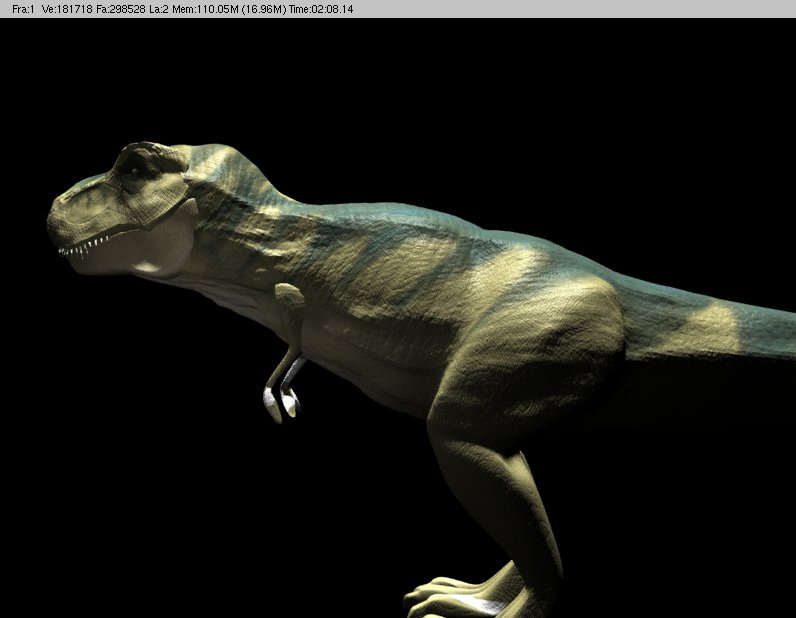 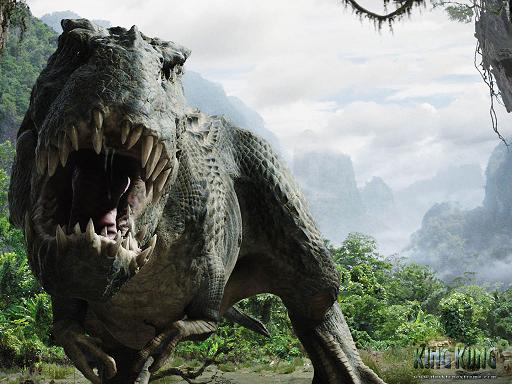 Join between arms and body looks artificial. Try a shot with a posed model in a similar background to the king king one and compare like with like. Lighting a little artificial too.

Compare apples to apples. First, get a background. Stuff looks much better in context. Second, pose him as per the movie, and light him with the dramatic lighting they used there. Then you will be able to see what you need to change. I think you might be closer than you think.

I used multires on the body - so in order to attach the arms and head, I have to apply the multires, which I don’t want to do. I’m willing to live with the detachment only because of this reason. I recognize it would look way better if they were attached. But besides that, it still has some major weaknesses. I look at Jurassic Park as well. When I look at theirs, I think - man that looks real. When I look at mine, I think, man - thats a sweet fake dinosaur. I’ll get a post on here with similar pose and lighting.

Here is the same dinosaur in the new pose. Does it look more like jurassic park or toy story? 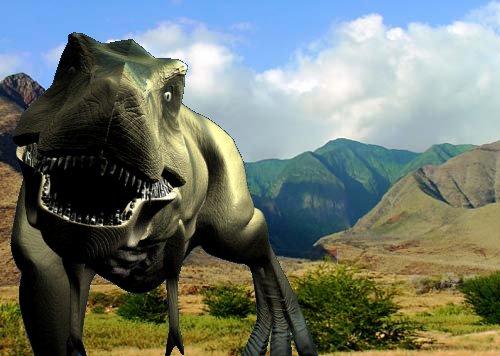 Here’s the rub when you ask these types of questions…you don’t REALLY want to know the answer. Heres the simple and short of it. You don’t have enough info. You threw in some textures, you threw in some lights and wondered why it doesn’t look realistic.

the simple reason yours doesn’t look realistic while the other one does…skill. Not to be an ass or anything, its just that michealangelo didn’t get up on the ladder to paint the cistine chapel the day he picked up a brush for the first time. It takes tons of time to expect realistic results. Sometimes no matter how hard you try you just can’t get it. These are the times you change as an artists. Do you give up and move on saying i did my best…or do you keep going till you’re bleeding from the nose due to frustration? that last sentance was figurative…dont go to that extreme but you get the idea.

I used multires on the body - so in order to attach the arms and head, I have to apply the multires, which I don’t want to do. I’m willing to live with the detachment only because of this reason.

Why? are you planning to keep the multires forever without ever applying or mvoing this meash in any way? If not, then apply…attach…and then do more multires if you need to. You shouldn’t be sculpting until your model is done anyway unless you plan on adding more latter…see its the experience i was talking about up earlier. Not saying I have more exp than you or less…but I’ve watched enough pro’s workflows to know they move to the next step until they’re done with the previous one…unless working on a team where that’s not always possible.

edit- your lasst picture just came up for me. yeah you need more maps, better lighting, a better rig, and better posing *(see how theres looks like its trying to balance AND attack while yours looks like its just trying to attack while stumbling on the balance trying to mimick the ref?), the detail in the model itself will come with more practice. It sdoes look good though…just dont stop here. you never learn as much as you can if you just stop when you think it looks good. Do yourself a favor now that you have them in similar posts. give the two pics to your friends and have them circle the differences they see. Then work on the circled areas and do it again and again until they can circle no more. to help with the pose, trace lines on the ref from hip to hip, shoulder to shoulder, top of the head to the bottom, side of the head to the side…then put that tracing OVER your pic…and adjust the model from there

I know you are trying to be helpful WannaBeCreative, but I am well aware of my lack of experience. That’s why I’m asking for help. I do really want to know the answer. I took the time to draw the textures by hand. On the body I drew three nor maps by hand. Those maps took several days to draw. So its not that I’m throwing stuff together.
I am very inexperienced - Ive had this prog for 2 months now. This is my first model ever. So I don’t know things like diffuse maps and hardness maps. I have applied spec maps though. As for the multires - by applying them - I thought that was unwise as it would increase the number of vertices tremendously. I thought the purpose of multires was to keep the number low - everything else seems to function fine with multires on. I am confused on the advantage of applying the multires. I am certainly not throwing my hands up and giving up - I am humbly seeking the wisdom of more experienced users. I figure - why not listen to wise people? I think a person has a problem when he doesn’t admit to his weakness and isn’t seeking the advice of others. I am admitting my weakness and seeking growth and advice from better artists.
I have learned so much from this first model. The mistakes I’ve made will allow me to make far better models in the future. So I’m asking for more input, more critique. I want people to tear this model to shreads and tell me every mistake. Only then will I grow.

I agree mostly with WannaBeCreative.

a) lighting needs more work (maybe a lighting that matches the lighting in the background, helps a lot), and Ambient Occlusion
b) As said, spec and hardness maps, for the skin to look more real.
c) some tweaking on the model and maps, a less symmetrical look.
d) better compositing, try Alpha Premul on the rendering tab.

But its a fact that on the other dinosaur has a lot more of people over it.

The color temperatures are different… there’s is less vibrant and more lizardy… look up reference textures and even lighting references… I have an article in Cinefex on Ironman… they took metal on set just for lighting references… if it works for the pros why not for us?
For your level of experience this is fantastic work. All those years ago I remember my first “model” which was comprised of primitives and was recognizable (barely) as the old batmobile… no hand painted textures, default lighting, and really… if I didn’t tell you what it was, you’d never guess.
Normal maps are what’s going to make your scales really pop. Check out www.filterforge.com for some tileable scale normals.
Another thing that might help… the topology (layout) of your face and the overall shape, doesn’t match theirs. Yours is wider while theirs is taller. They have more pronounced crests on the eye ridges and a row of spines up the middle.
The teeth on theirs are yellowed while yours appear to be white.
They have a fold of skin connecting the back leg to the body.
The lip around the bottom teeth is too thick and squared. Add a bevel to fix both problems.
Your eyes are out further and are also white… on a guess I’d say theirs are amber and brown with serious veining.

Good work, you’re really on your way… The new guys are gettin scarier and scarier each year…

Thanks so much everyone! I appreciate the help. I’m beginning to realize the shaders is my next thing I have to tackle. Honestly - I look at that stuff and have no idea how it works. When making a hardness map, what is the main idea? hardness defines how the light spreads? I’m not really sure what it is - i’ll do some more research. I have been using my skin normal map as my specular map - does it need a different one? I turned the spec quite a bit down cuz it was looking too shiny. Regarding light - is that just a matter of finding the right color?

Well you need a good lighting setup for starters, and better modeling.

If you don’t want to apply multires then one of the GSoC projects being worked on is being able to fully edit multires meshes.