Meh, I’m not a fan of pie menus either. Mouse gestures are awful when I’ve already positioned my mouse in a particular spot or am moving it into position and then want to do an action (or if I’m quickly working my way across a scene from left to right and I keep having to do a pie->left gesture against the grain). Takes more energy than just stomping a key too.

For pie’s with hotkeys that just means 1 extra key to click (1 to trigger pie, 1 to trigger the action)

For pie’s with more than 4 options, quick mouse movement to any direction other than directly up/down/left/right is not accurate enough, who knows which option will actually be picked if I didn’t somehow move diagonally enough.

Yes - there is a place for pie menues but even as a fan of them I also think they should never be mandatory for usage. And they are not suitable for everything, I think. Using them for entering edit mode is weird since it is used so often. The pie menu should be a secondary option like Shift-Tab in this case since switching actual modes other than into edit mode isn’t done nearly as often as tabbing in and out of edit in most cases.
Ultimately, costomization really should be key here. After the layout itself the most work should go into a system that makes it easy for users to customize menues, overlays, forms and pie menues themselves.

People should have the choice, normal menus or pie menus and the soft should take that in consideration, like that no fancy keys to activate one the another.

As in either or for the whole program structure?
No. Nerver ever. That would rightfully alienate a lot of users as there really are places where one makes more sense over the other and where users might prefer a mixture.
The default could take the one or another approach as an option for a setup configuration but as son as people want to customize then there can’t be an either one or the other approach any more.

Yes, you do want to keep usability as fast and simple as possible but that should never come at a severe expense of flexibility. And globally disabling one menue set over another is a HUGE cut in flexibility.

but the point of pie menu is the muscle memory and gesture swap directions which is not possible with vertical staggered menu. After you learn your pie menu you don’t even need to read anything you just remember directions and things happens almost like magic.

That’s the problem. Those who have been blessed with a good brain memory to remember certain things, tend to believe that it is so easy for all people to remember those things. People are genetically different, all with different abilities. That is the beauty of diversity.

You can adjust the pie radius in the user preferences: 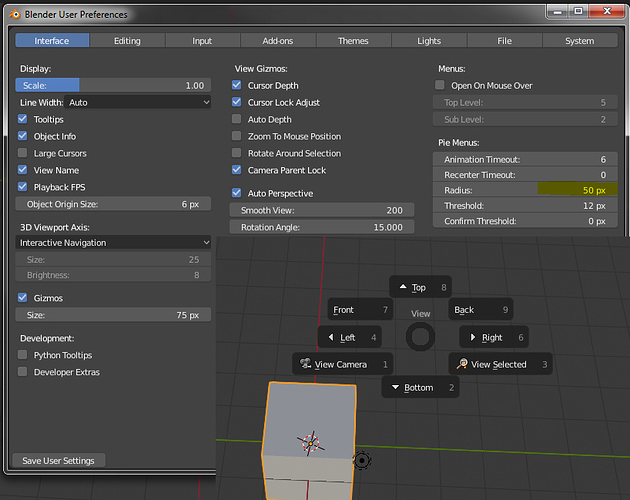 Post above this one were migrated from the Blender 2.8 viewport updates thread.

I think many who hate the pie menu, it is because of the wide circumference and the radius of distance between the center from where the cursor is activated and the buttons … I’m sure that if it was halved the distance would be accepted and loved more

You can adjust the pie radius in the user preferences:

There’s one slider missing there, to do tthis:

It does not work the same way. It’s a logical grouping thing in daily usage. The difference especially in this pie menue here is that the options are spread apart rather far. So if you do not know by heart which one is the right option then you need to read across a large portion of the screen (as opposed to scanning a small block of text) - remember: 5 to 7 bullet points is the magic number of being easily remembered and skimmed over.

I am not entirely agains radial menues, though. I do like them and I do use them as well. In that case, though it doesn’t make too much sense for me personally and I’d rather have them being customizable for individual tasks than for mode changes.

For axample: I’ve set up a pie menue in another application for a quick access to primitives or model creation with a few set creation options. There it works really well.
The radial menue also isn’t spread apart, there. It’s just the center dial with a slightly larger diameter but the options are super fast to reach. 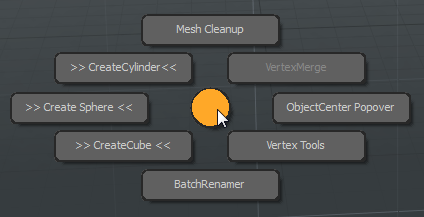 Radial menues are a good thing but indeed, I wouldn’t see them as a replacement for every menue either.
The problem is that a longer list can’t just like that be translated into a pie menue, I think.

What I’d actually like to see is an editor to set up pie menues or interface lists in an easy manner. Then bein able to map that to your own shortcuts. That way you can recreaty anything you really don’t like yourself.
Coding should mostly not be required for creating a popup or a menus (or even not at all if possible). That way everybody is free to change it for the functions where radials just don’t work for them individually.

You can disable and enable individual menus in the add-on settings for the official Pie Menu. 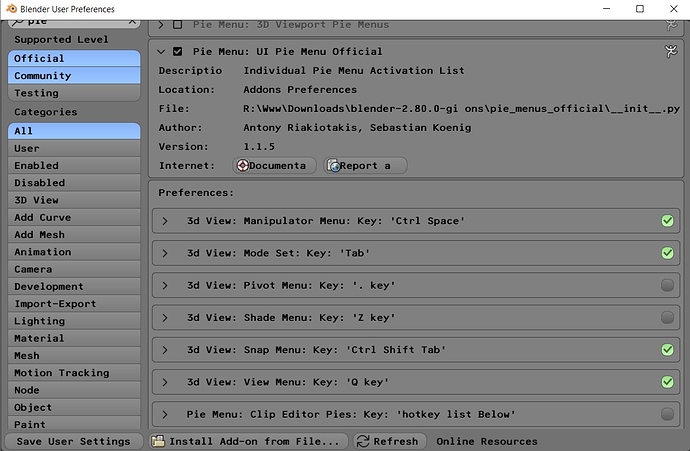 Unfortunately there’s no enable/disable the snapping menu for you on shift + s.

I want to mention the Pie Menu Editor, it’s a add-on that you can support by buying from the blendermarket. And I really like it, it’s one of the things in Blender that has made my workflow so much faster. You can easily without coding python just make your own menus, pie menus with sub menus and sub pies. It’s really effective.

My shift + s is “Oh snap!” and I have Snapping, Selection, and scaling modes. all in one! It’s not pretty but super effective. 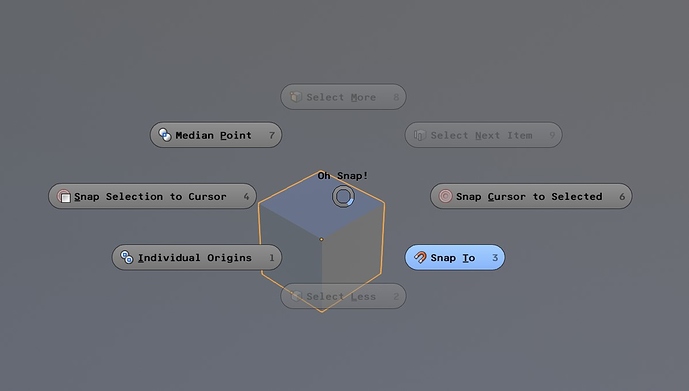 But I would like the UI team take consider from roaoao’s add-on making it easier to customize the menus since they’re an integral part of most users UX.

How are forms and menues currently created in Blender - is that by Python scripting and layouts?

The problem I have with the current Pie Menues is that they are very rigid in what they can do and how they are called. It would be much better if there was an easy form- and piemenu editor that would generate the necessary code in the background. If it is given an identifier it should then be callable by this identifier in the shortcut editor of the settings.

Modo has that feature but it’s implemented so terribly unituitive it’s really no fun.
What I already like about Blender’s way of calling functions by shortcuts is that all the options of a tool are presented in the editor and can be set so that the user doesn’t have to know how many variables there are and how they are called. Combine that with a UI editor to create own pie menues that are setable on every Shortcut combination just like any other tool - that would be ace!

You basically described what Pie Menu Editor does, but having something like that natively integrated in Blender would have been optimal.

hahaha who is the boss now ?

I just proposed a toggle between menu or pie menu in keympap (as toggle A or not toggle).
https://developer.blender.org/T56881

For anyone looking how to turn any pie menu to a normal menu, i found a way to do it. In the keymap editor, simply remove the “_pie” extension on both fields.

In the newest release of Blender there’s pie menus defaultly enabled (which is ok to me) but especially on Shift+S (snap) the pie menu seems to not be existing. I looked into keybinds in pie menus and Snap in 3D View is just missing. Also adding _pie in the Snap option didn’t do anything, resulted in actually deleting Snap option from keybinds. So is there no pie menu for snapping in newest release? Or is there way to fix it. Thank you.

Does ‘shift + s’ work at all? If not, did you try resetting the preferences to factory setting? (Save your current presets before doing so!) Does it work then?