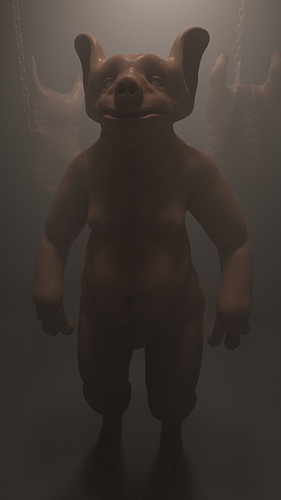 THIS is the Pigman. It was a organic form study after I watched the film ‘Mum & Dad’ (2008) and noticed there was quite a link between man and pig. I think pigs are great animals to study as there is so much material you can work with.

PIGMAN took approx 16 hours or 2 days of work. First in ZBrush I created a shilouette using zspheres to help build up his shape. Then beginning at a low value I started to use dynamesh to build form and shape. As the body started to take shape, I bumped up the dynamesh resolution. From 16 to 32 to 64 to 128 to 256 keeping it in squared fashion. When I was pretty happy with the shape I then used zremesher to retopo the character. Following that I then UV unwrapped the character still within ZBrush and at this point I exported the character at a rather low poly count allowing me to rig it without problem. I then bumped up to subdivisions two levels and added in detail like wrinkles, veins, skin surface and spots. I aslo then poly painted the model. Using the colour spray and mask cavity to help add to the illusion of real skin. Then I exported Normal, Cavity and Poly Paint maps out. Then in Blender I imported the model and created a basic shader that has a diffuse, slight glossy and slight SSS. This was rendered in Cycles with Volumetric scattering to add to the horror vibe. I also created some pig carcasses in ZBrush using the same technique and placed them into the background. Rendered at 400 samples for 30mins. 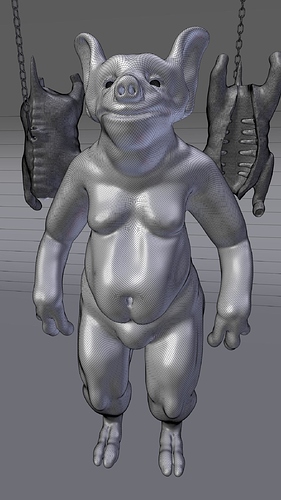 NOW I am working on a retopologised version of this model as I am running into a bit of difficulty with rigging and I would like to add an interior mouth section. Thus allowing me the ability to make him talk.