I’ve begun a rather ambitious project to model the buildings from the Plan of St. Gall, the so-called “ideal monastery” drawn up during the reign of Charlemagne. I found a three-volume treatise on it by Walter Horn and Ernest Born, which is a treasure-trove of great scale drawings, from which to get my background images. This is a serious project, which I’m working on as a portfolio piece. I’ll eventually try to pare down the verts and make a game-engine walkthrough. For now, I haven’t done any real texturing, the textures are all temporary so I can see what it will eventually look like.

I’m mainly hoping for help with techniques. Right now, I’m having troubles with the “set smooth” function at vaults and rounded walls. (You can see the problem at the side of the apse in the exterior shot.)

Renders are all BI with AO or just screen captures. 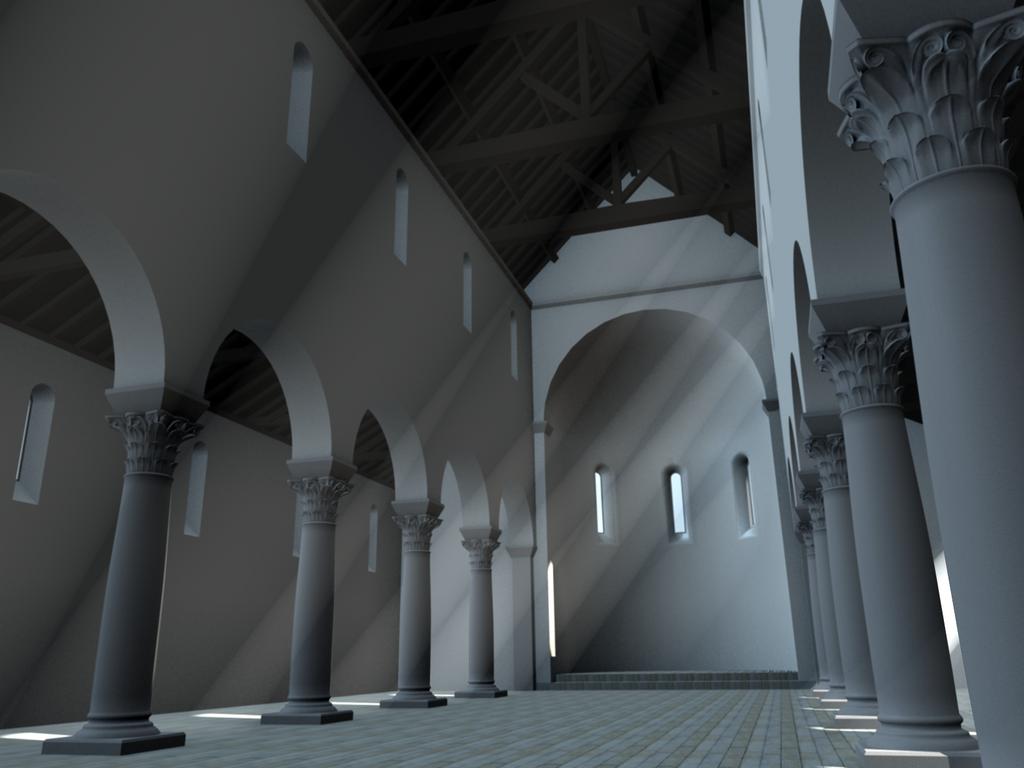 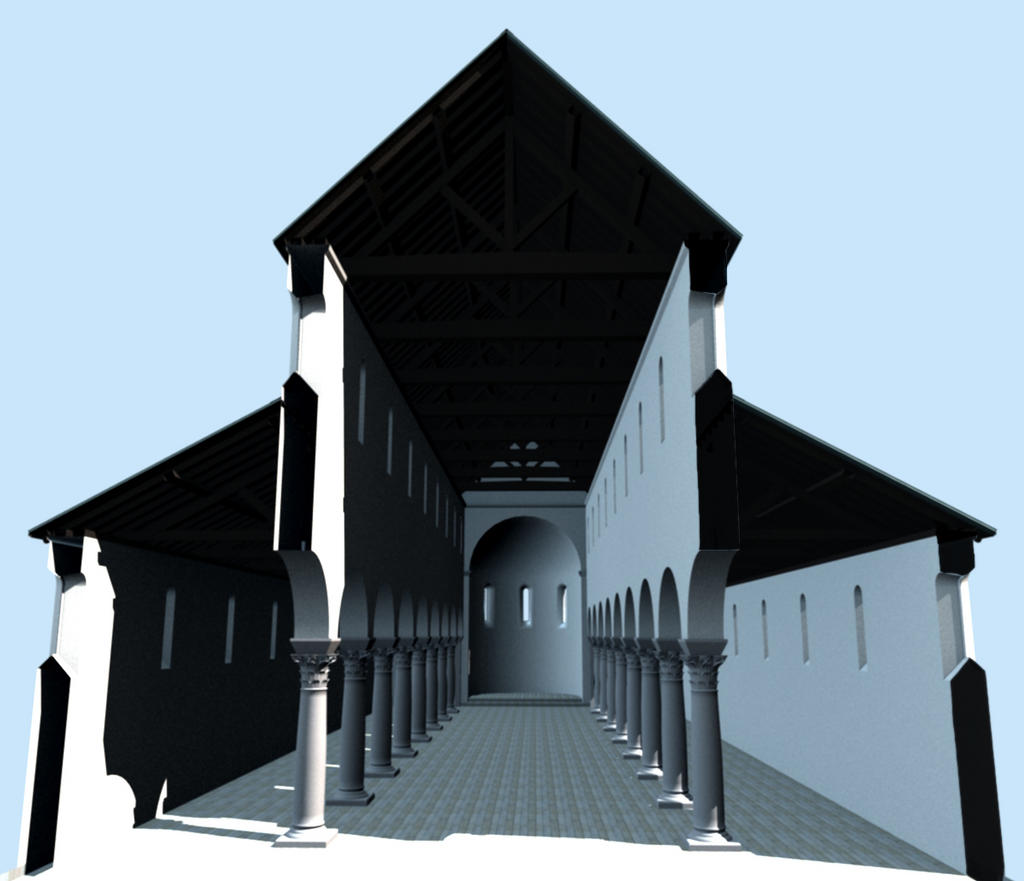 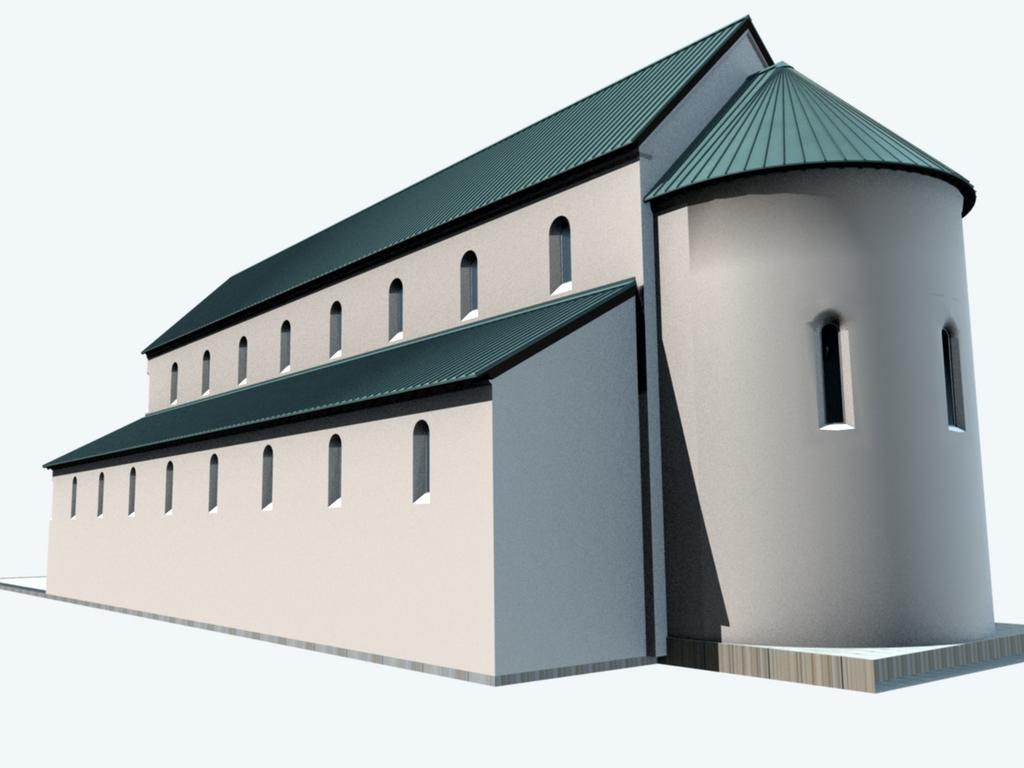 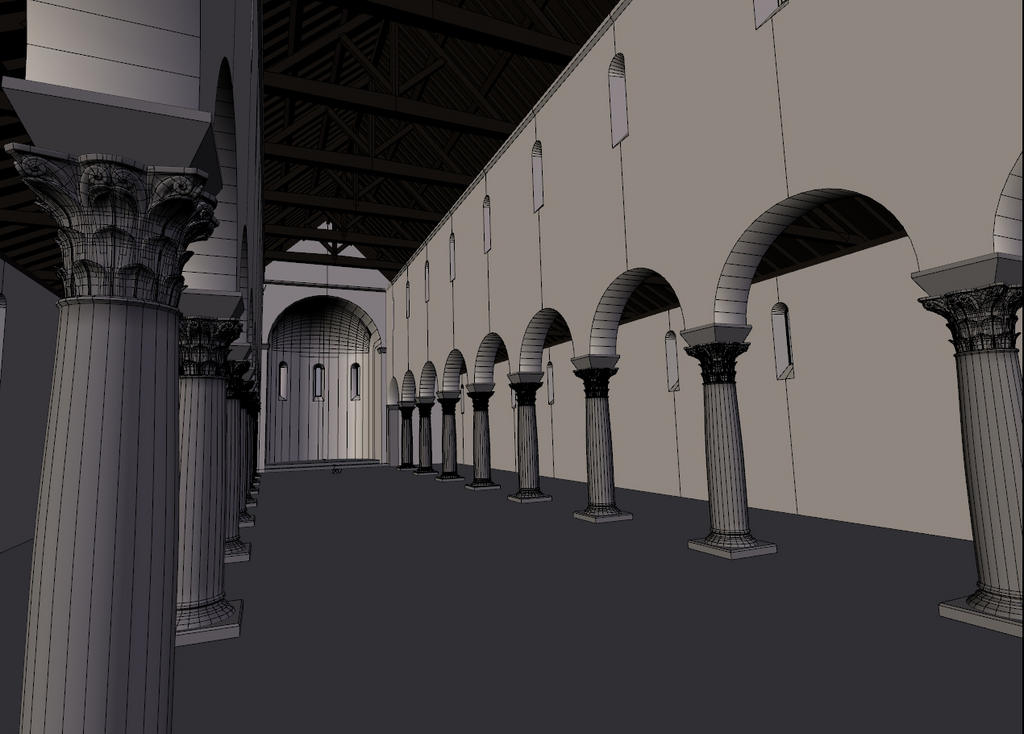 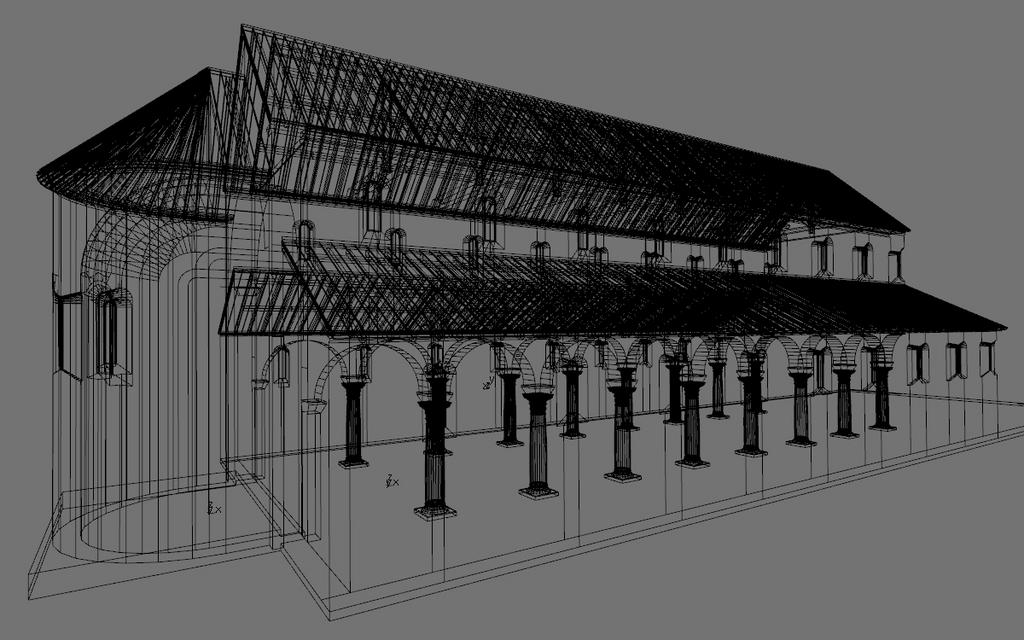 Try add another edge at the bottom and at the top. That may fix your set smooth problem

Thanks, I’ll give that a try. I’m still a bit flumoxed on how to make something rounded in one dimension, and straight in another, like at the inset windows at the apse. I’ll try to post an example of what I mean when I get to my home computer.

I have found (through many tries) that using the auto-smooth feature in the mesh editing panel works wonders! Just set it to 80 and click the button and the black marks from set smooth go away! You can also try recalculating the normals by selecting all the polys in edit mode and pressing Ctrl + N. Hope that helps!

wow! i like the model… are the decorations on the columns modeled? they look good!

The capitals are very like the acanthus capitals that I’ve been putting off trying to model for ages in my Pompeii stuff. Did they take long?

Thanks. They’re modeled and subsurfed. (Take a look at the wire image above - you can see the topo.) They took almost as long to make as the rest of the nave, but if I had to do it again, I’m sure I could do it faster - lots of false starts. Basically, a cylinder with lots of pushing and pulling, along with the aid of mirror mod and the curve mod. I haven’t textured yet, so there will be some bump mapping, too. I’m enclosing a photo of the model I used (which Horn/Born used as well in they’re drawings.) I didn’t use sculpt mode - I found that I needed too many verts to make it work. A true roman corinthian captital, zwack23, will be quite a challenge. 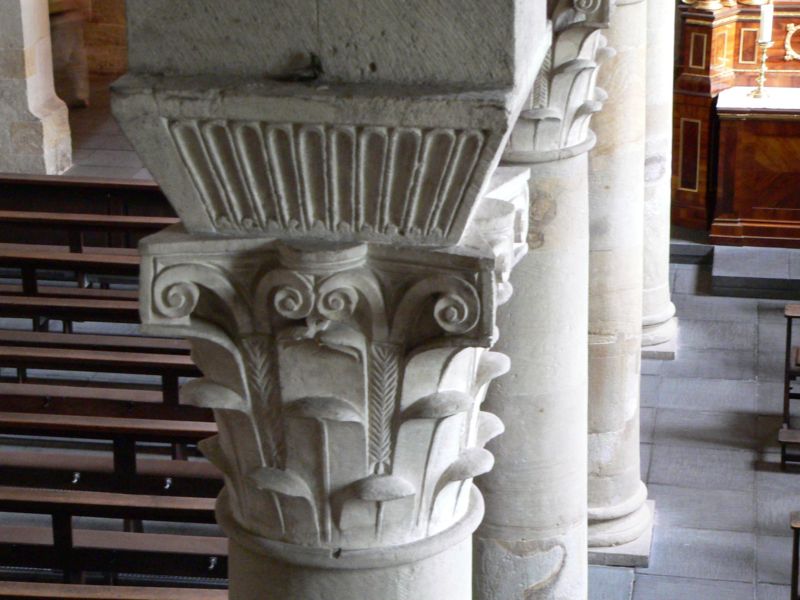 OK, I took your advice, mivrex, and added additional edges (edge loops around the window surrounds and below the top molding), and the result is good. Obviously, adding verts is always troubling, but I only have to do it at the apses - the rest work fine with the set smooth function. As for the “auto-smooth” function, I’m not sure which one that is. I tried the “smooth” function in Mesh Editing 1, and it really did odd things, moving my edge loop downward…probably not the right function. I got rid of that band by setting the straight wall smooth, too, even though it isn’t a curve - seems to work well. 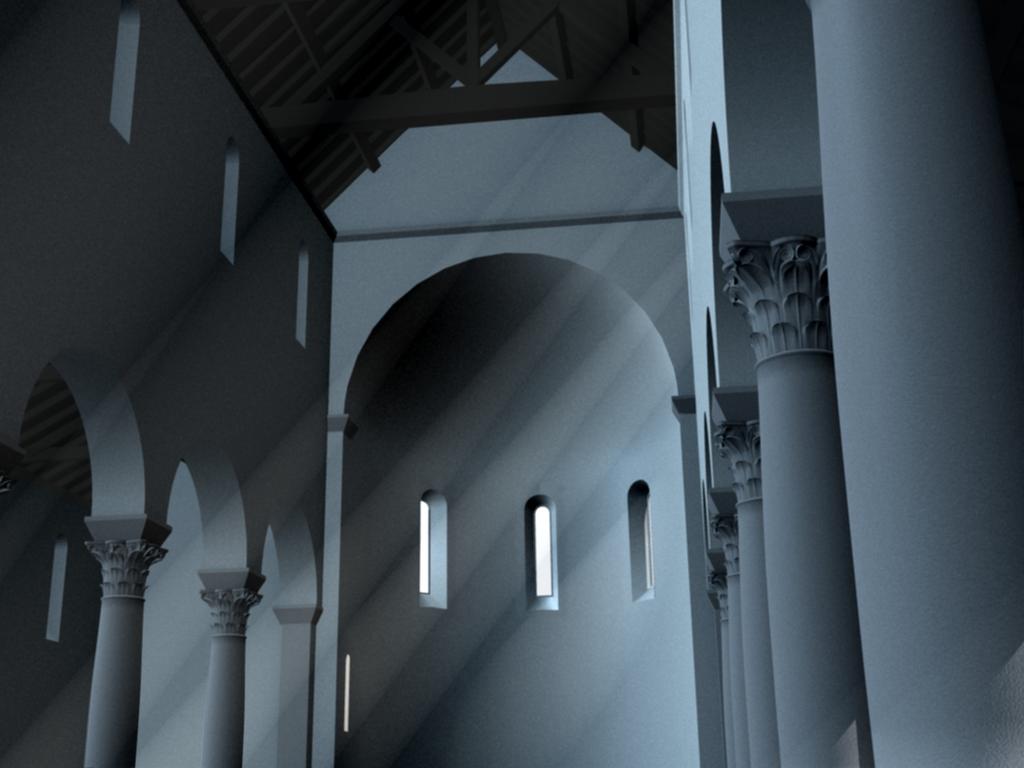 Just some updates. Still working on the modeling, still not textured. 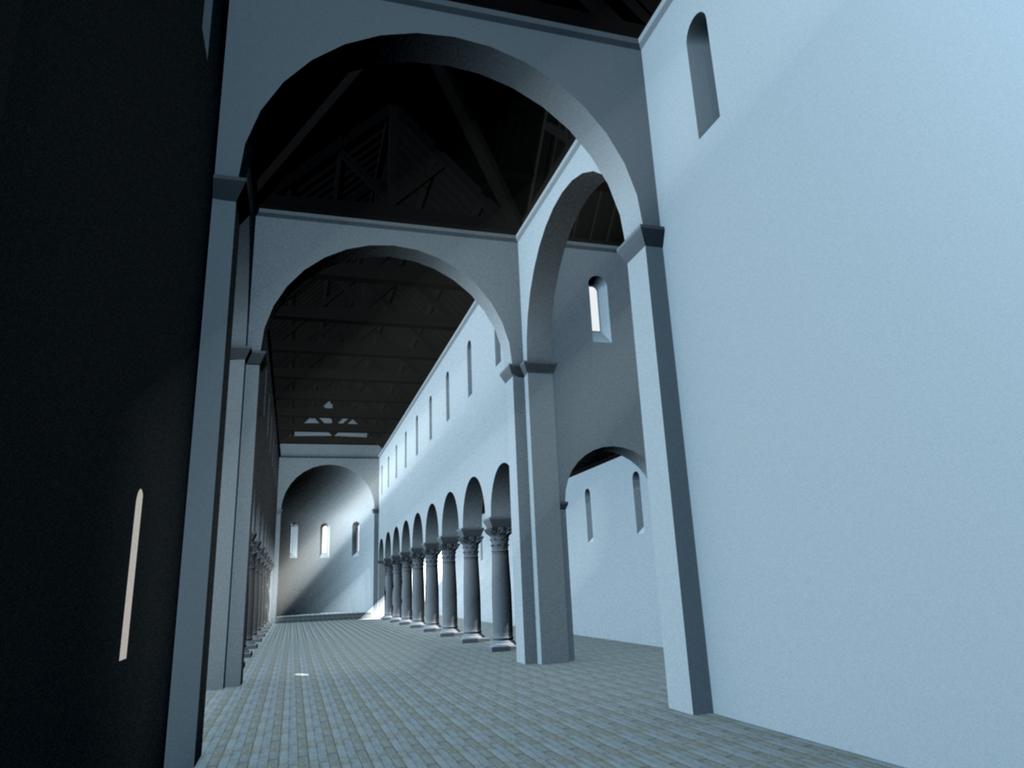 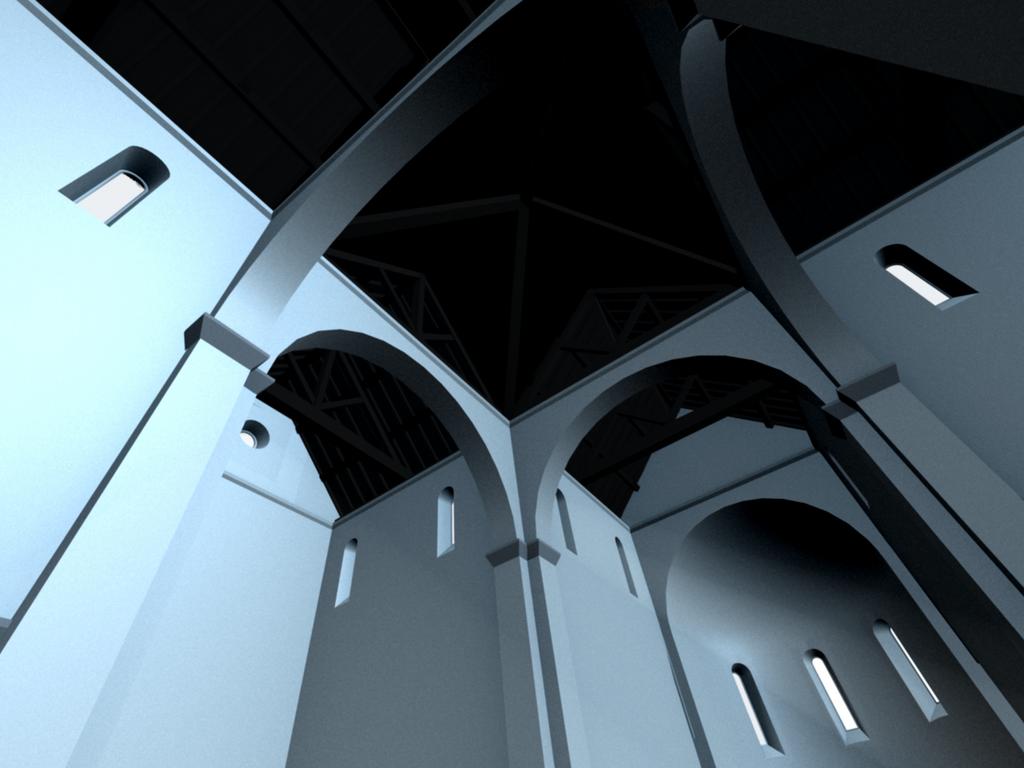 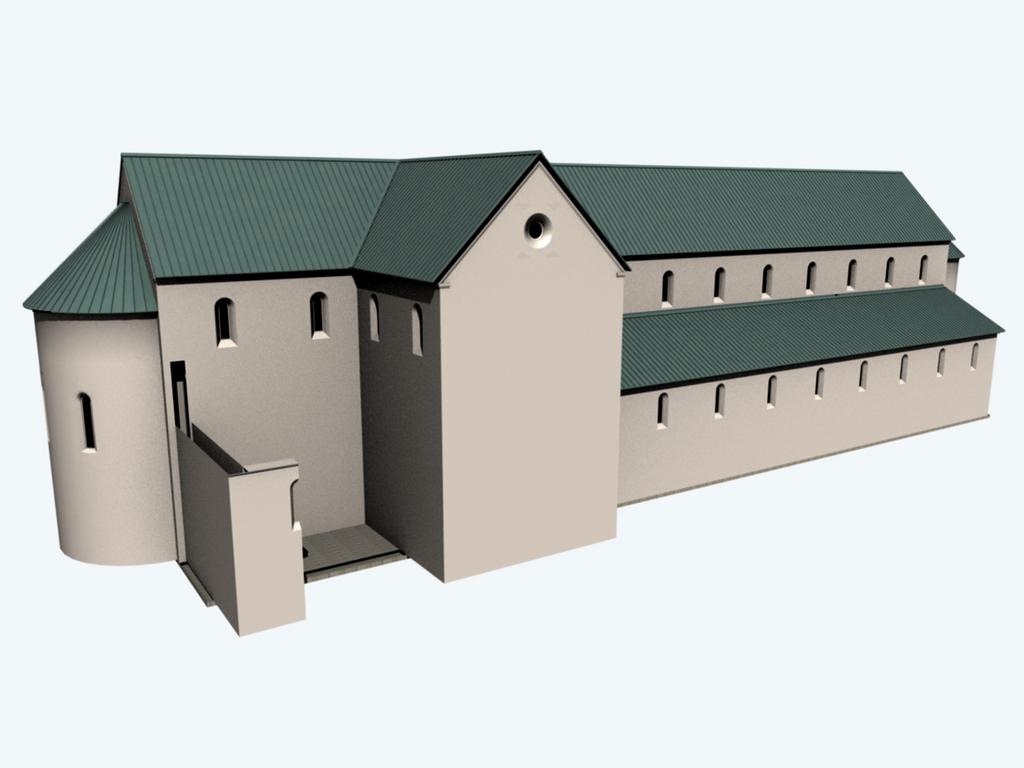 For your smoothing/sharpening I’d suggest using the Edgesplit modifier. Make sure that it comes after the subsurf (i.e. below). You can then select edges and mark them as “sharp” using Ctrl-E. This works perfectly for most situations.
You can also use Shift-E to set creases on edges which makes them sharper as well but I found there are some rendering issues using the internal renderer on high crease levels.

Great stuff, now I want to pull out the old drafting table.

WOW! I have dual citizenship in Switzerland and the US. Believe it or not St. Gallen is my city in Switzerland. I have visited the church you are modeling several times, in fact I may even be able too find some high quality photography that I have taken of it. I may have some inside shots, however they are hard too come by since you can’t bring camera’s inside.

schdeffen: thanks, I wasn’t aware of that feature. It should work well at the columns; I’m not currently using subsurf on the walls/arches, but perhaps I should, and crease the edges? I’ll give it a try. Dudebot13 suggested autosmooth, which I tried on one of the areas, but I’m not sure that I see a difference. Maybe a combination. I hate that I can still see the segments in the arches! When textured, it might look better, though.

hundred: heh, drafting table, haven’t used one of those in years!

Haker: great, thanks. Now, just so you know, the current church in St. Gallen is actually a thoroughly baroque building now, so what I’m modeling is different on two counts: the church that was there prior to the current church, I don’t have any plan information for. But beyond that, I’m actually modeling the building represented by the Plan of St. Gall, a complex that was never really built as it was drawn. I understand there was some digging there to find out what was there in Charlemagne’s time, but again, I haven’t found any information on that. I should probably post some of the drawings from Horn/Born’s book to show where I’m headed with this project. Their drawings show the “ideal” monastery represented by the plan, as if it had been actually built.

Thanks for the interest and comments. As long as my computer can keep up with the verts, I’ll keep going.

Thanks, 'Dude. I have high hopes. Maybe I’ll even get this finished!:rolleyes:
Two reasons to post here:
-the rendered image shows the difference between subsurf with edgesplits, as outlined by schdeffen, vs. setting select faces smooth. See much of a difference in the arches? Weird. Seems like it should really be noticeable. (The crossing wall is subsurfed, you can see where I didn’t crease the windows; the nave wall is not.) I think I can see how to make it work properly, but not without a lot of additional tweaking…I think I’ll keep going without subsurf for now and count on my textures, and if that fails me, I’ll have to subsurf some parts.

Thanks for the comments, as always. 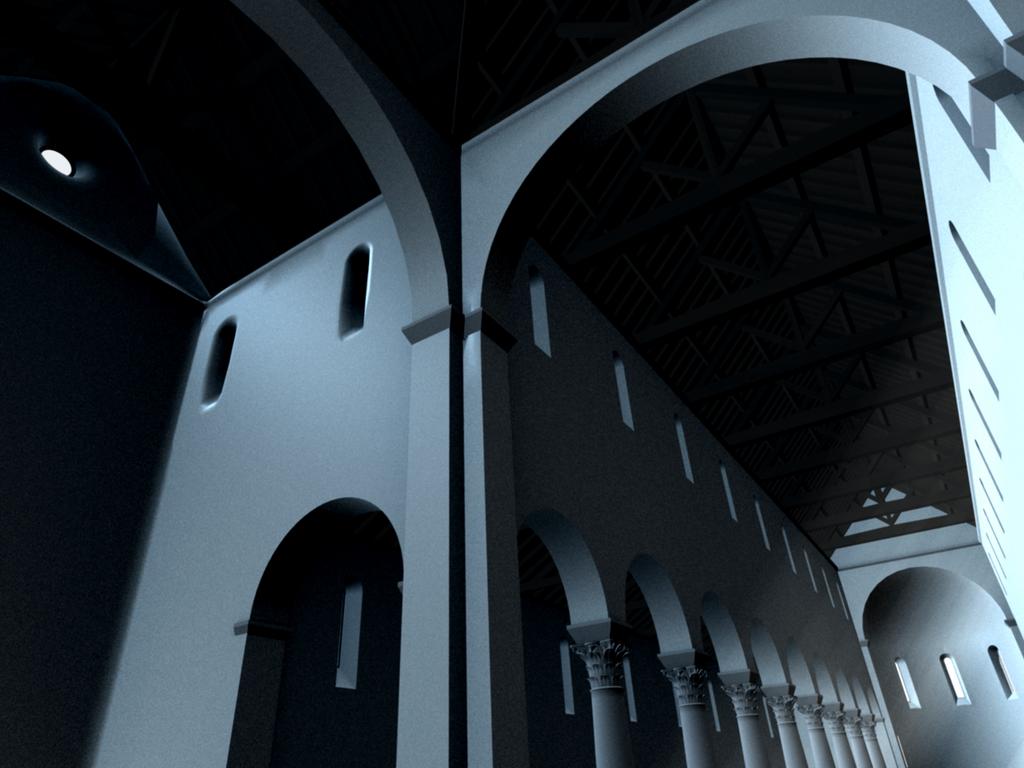 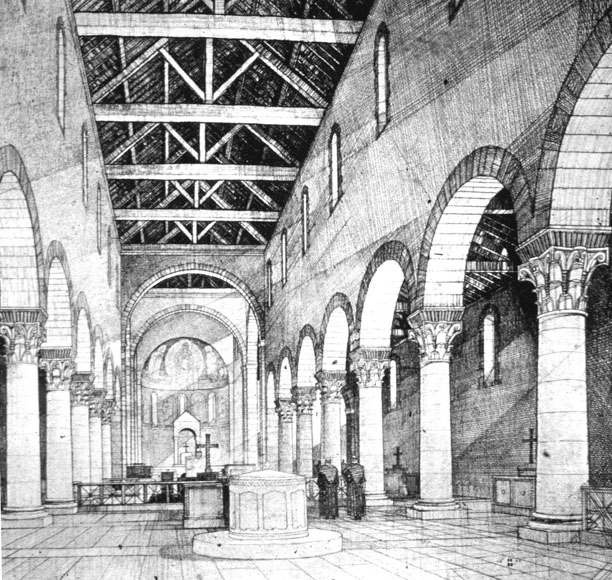 Coming out nicely, I like the capitals especially.
Could there be some subsurfing artifacts in the small windows in the last pic? Maybe it’s just the angle, since the rest of the windows down the nave look fine.

Slow going, as always, but I’ve been pluggin’ away. Still not texturing, still just modeling. The pics are of the so-called "paradis,’ which is a natural area you walk through just before going into the western end of church proper (its supposed to represent the Garden of Eden.) The modeling of the arches on a curve was a bear. I ended up doing a boolean, and then cleaning up the tris. Whew, painful. I played with using a curve mod on a straight wall, but then lining up the columns became difficult. Also, I’ve starting using the Edge Split mod - what a great tool!

Stick with me, folks, it’ll look better once I’ve UV-mapped! 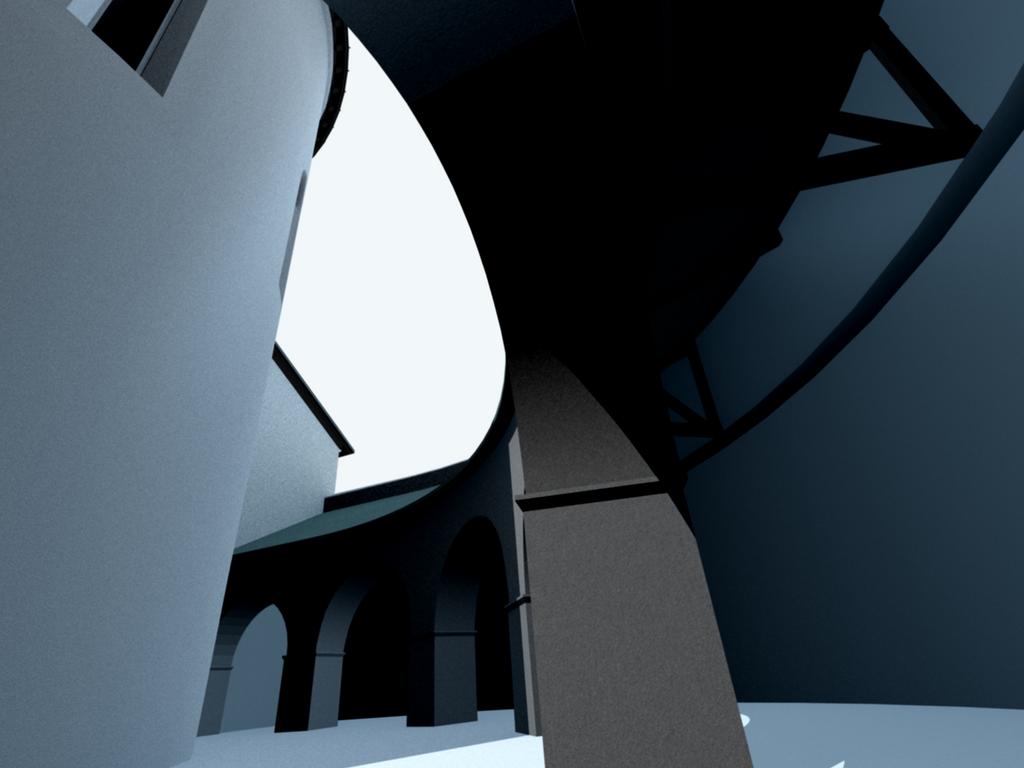 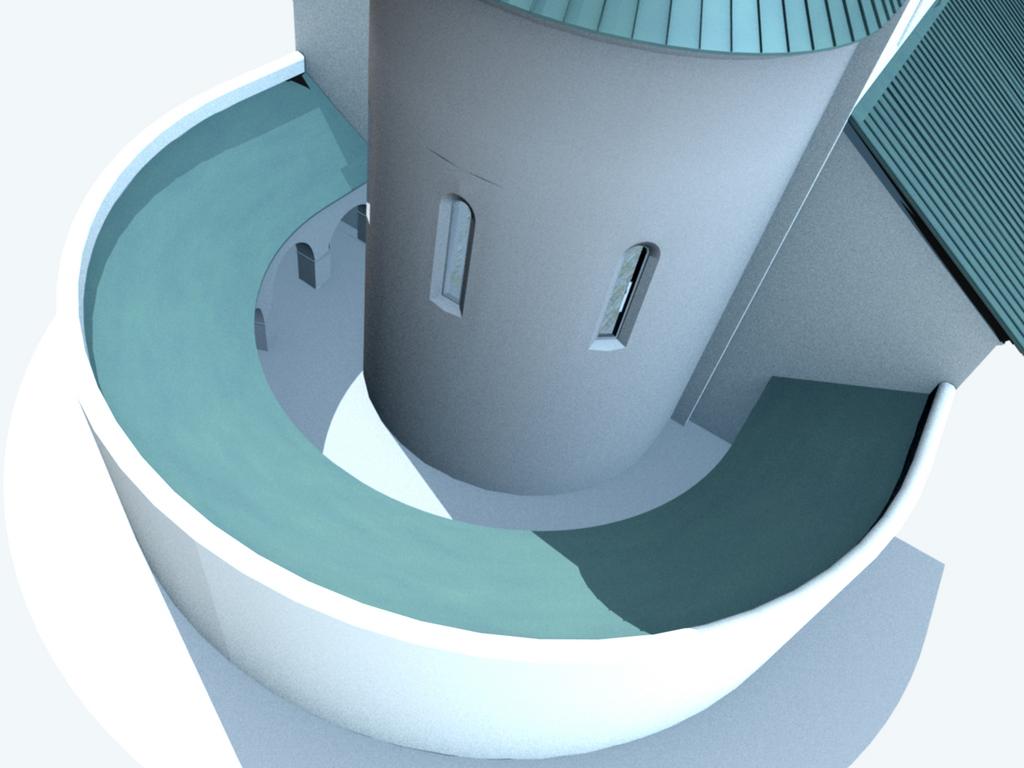 Quasimodo will probably want to use this one for a summer cottage. Nice job.

Still plugging away at this project. I’ve been doing the towers, which are pretty complex. The screen-capture shows what I mean - the modeling of the windows and the stairs (and making sure the stairs don’t cross in front of windows) has been occupying my evenings lately. I had hoped to finish the tower roofs, but oh well. I’m in the home-stretch of modeling the church now, texturing to follow.

The top of the tower was meant to hold some sort of beacon-fire (not bells) in the middle of the room, which could have been seen for miles. Can’t help but think of the Castle Anthrax Grail-shaped Beacon.

Anyway, thanks for your comments. 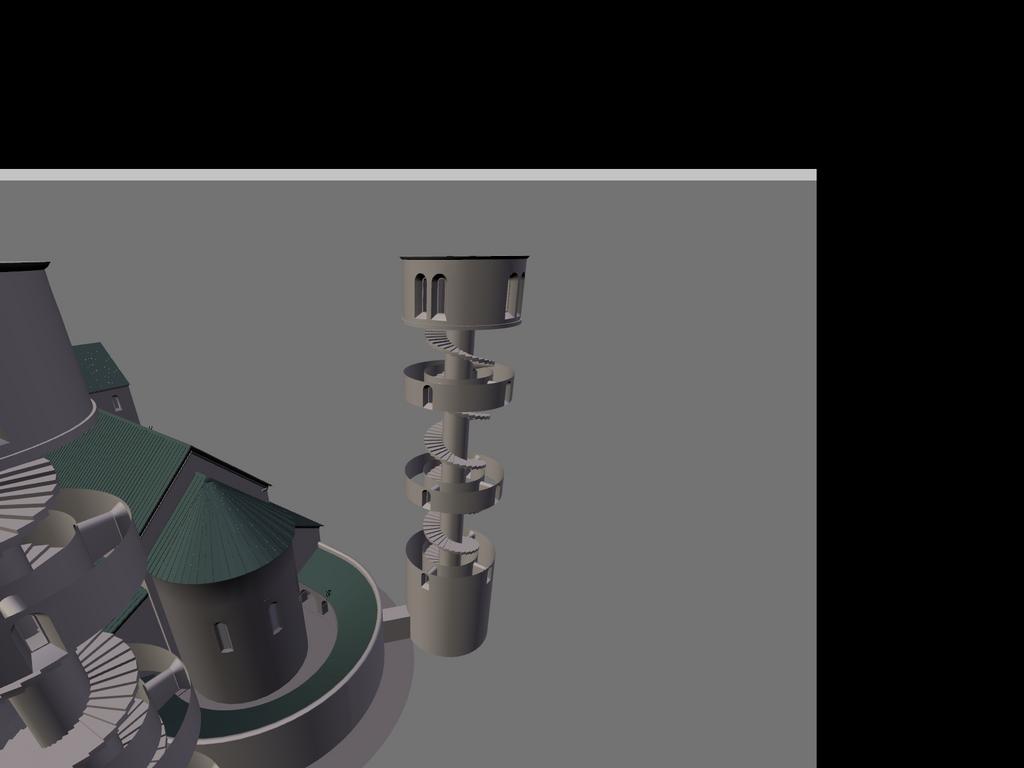 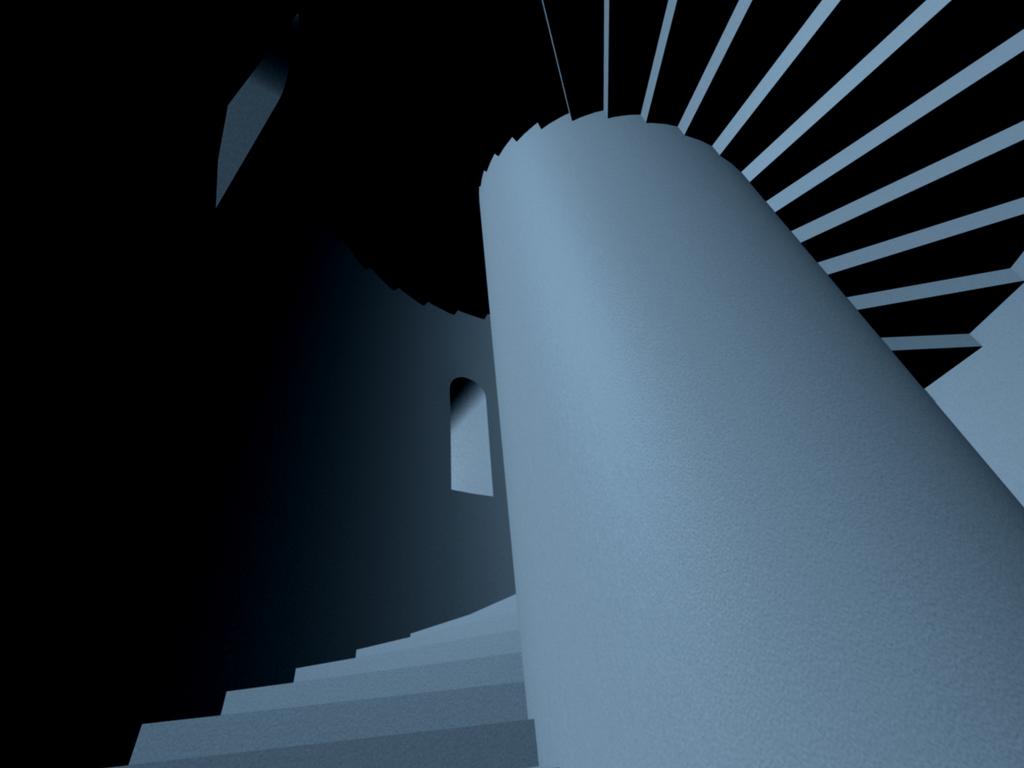 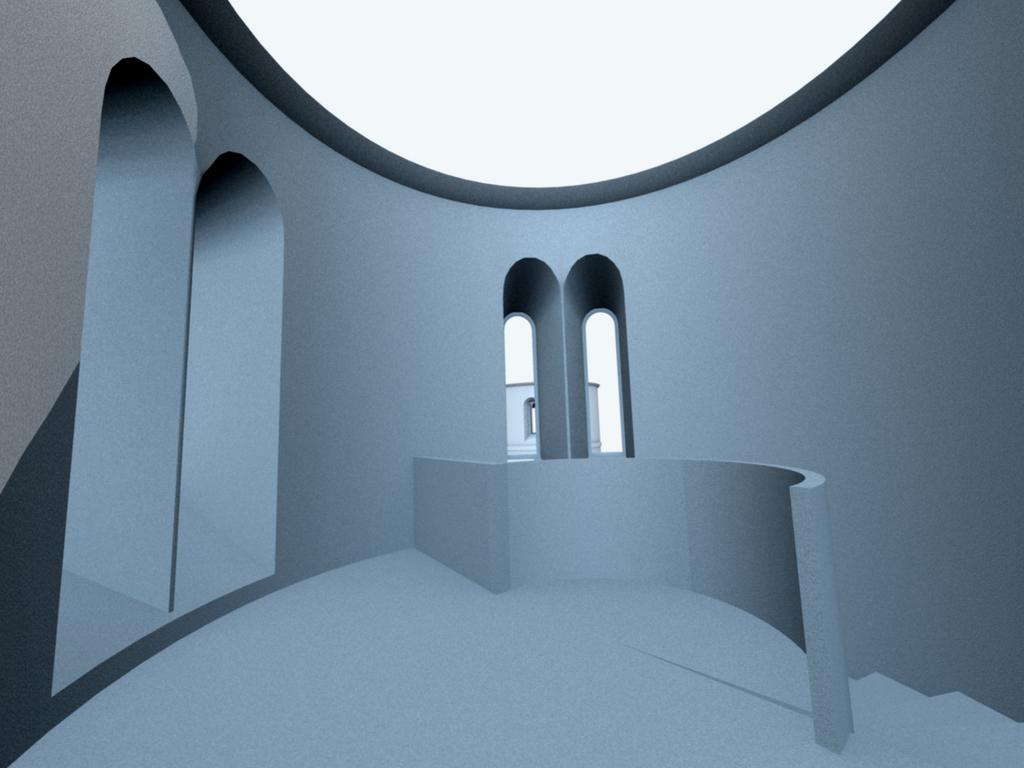 More progress. I’m done with the westwerk (pictured), which is the view that the pilgrim would get on approaching the church. Then, on the the crypt and the eastern end. The wire shows how complex this thing is, since I’m modeling both the exterior and interior of the building(s). 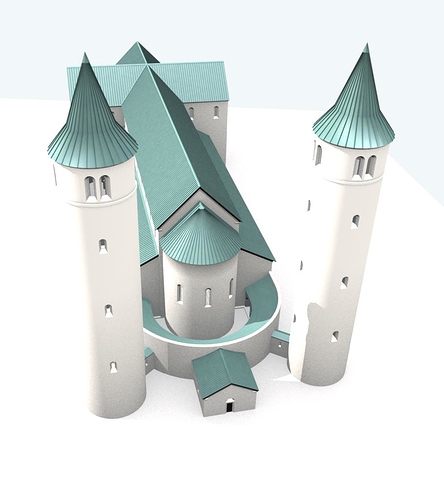 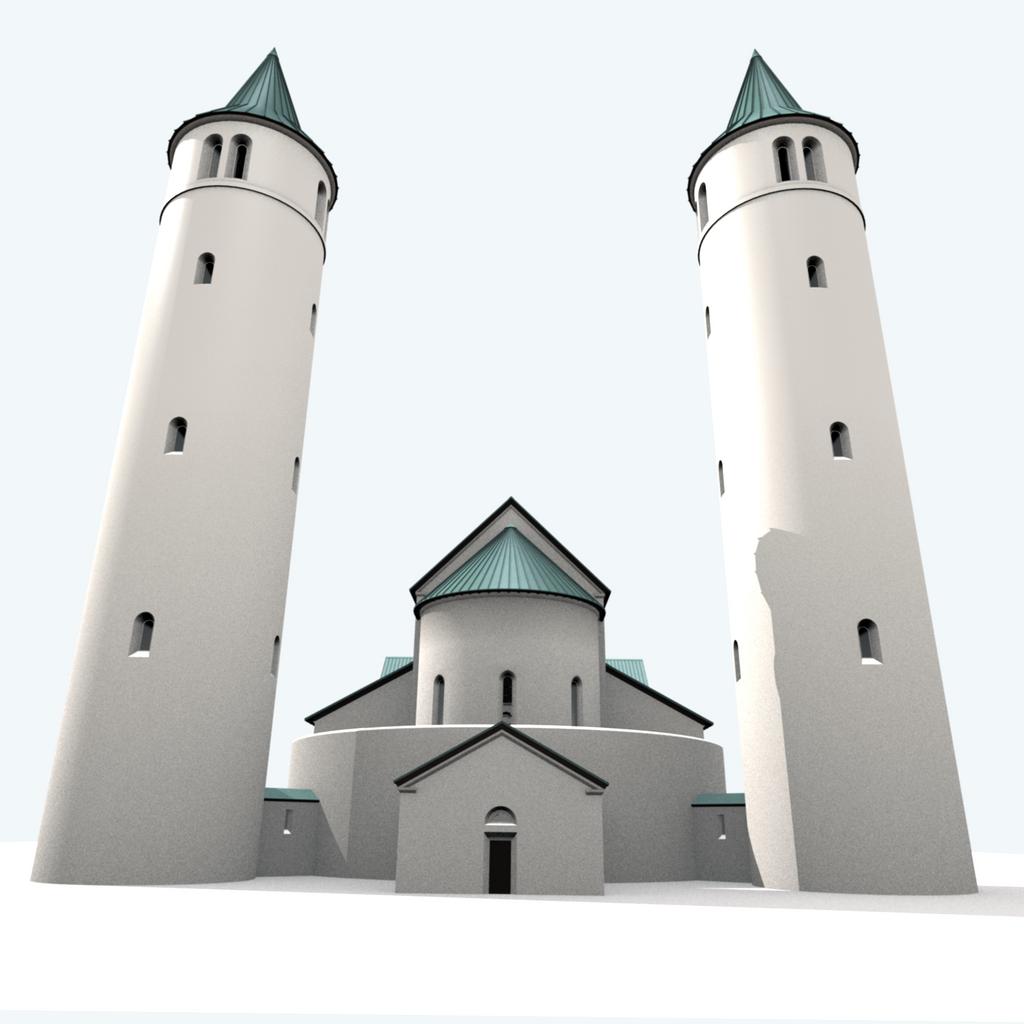 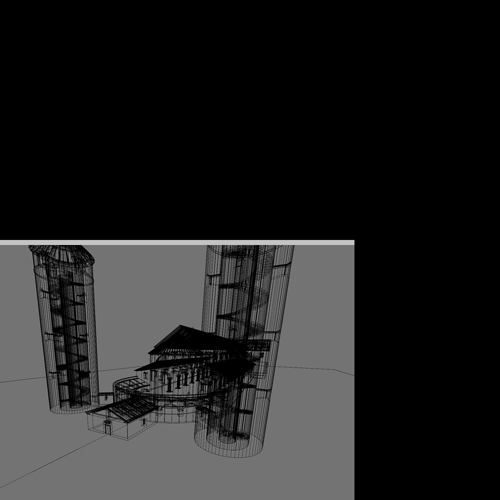