Hello, I’m a junior character artist. I will be very grateful for some advice about baking normals and other textures. I baked Character and his clothes\mask\staff using a cage in Blender. I can’t find the solution to fixing a normal map, maybe you can help or you know good literature\courses\videos to learn. Thank you!!

I’ve attached screenshots below to make it clearer what went wrong. 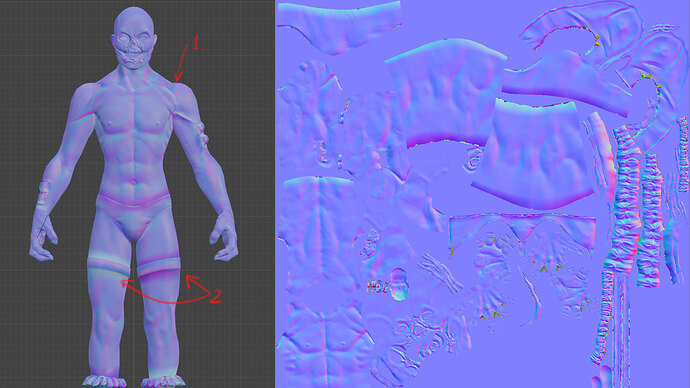 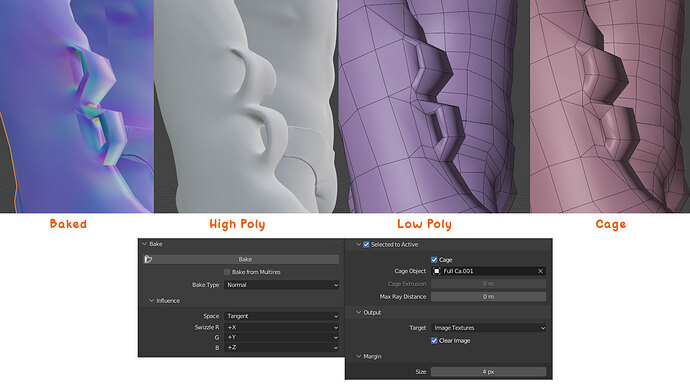 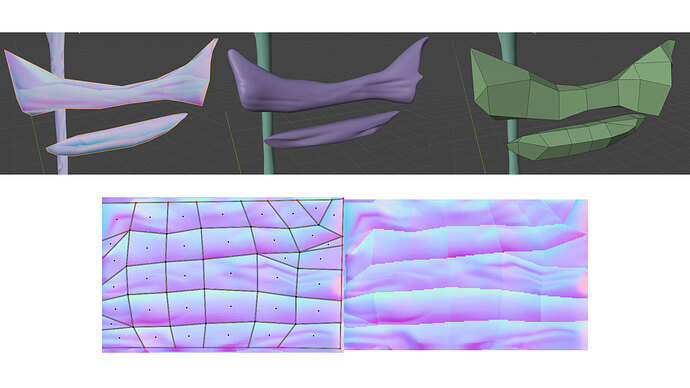 ↑There are also joints where there are no seams. 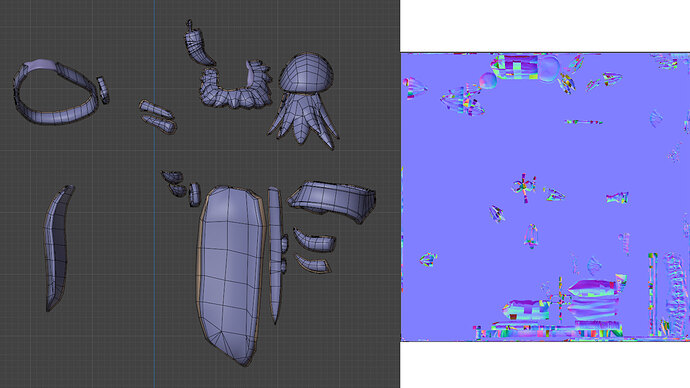 ↑If I don’t bake each part separately, the normal map looks like this

I could offer some advice.

In the first image, the differences in color might be completely correct. Normal maps are directional and will be adjusted to the UV’s rotation. You should try using it as a normal map in the material, it should look correct as long as everything is plugged correctly (set the image to non-color and send it through a normal map node).

In the second image, those arches are going to be hard to bake, because the 2 models are too different. I can think of a few ways to solve this:

In the third image, it looks like the low-poly mesh was shaded flat when baking. The shading matters when baking a normal map. Most objects should be entirely shaded smooth and the normal map will take care of the shading. Sharp edges can be used, but they should be kept for places where you intend a sharp transition (and the UVs should probably be split at that point for a cleaner result, see next paragraph for explanation).

In theory, a normal map can be baked with either smooth or flat shading and the normal map will be adjusted to match that shading. As long as the model then keeps the exact same shading with which it was baked, the normal map should fit. However, there is a bit of a problem in Blender: the baking has no anti-aliasing. No matter how many samples you use, you get the same bake. This is a problem when baking a sharp edge, because you will get a pixelated look. For this reason, if you have an edge loop that’s marked sharp, you should split the UVs at that point, so there is no sharp edge baked into a visible part of the texture.

In the fourth image, it’s hard to tell what is happening, but it sounds like the different pieces are somehow seeing and influencing each other during the bake. Do they all have their normals in the correct direction? What happens if the pieces are farther apart?

Thank you!! Your answer is very helpful! I’ll experiment with the distance between the objects, and if I can’t bake them together, I’ll bake them separately. Thank you for your time and kindness ) I’ll send the results later)

What is the best program for baking characters in your opinion?

What is the best program for baking characters in your opinion?

If I had to guess, that title is probably held by an app that’s dedicated to texture and baking, maybe substance or an other similar.

However, I usually do my baking in Blender. Despite having a more basic bake system, the convenience of having it directly in the 3D app is just great. It’s often less trouble to work around the limitations of Blender’s baking than it is to export everything to an other software, and it’s usually high enough in quality. Also, Blender can bake complex lighting and materials, that’s a pretty big advantage.

Maybe the best baking app is the one that’s already part of your workflow.