Most were something simple like a box or icosphere, and the only one I could find about unwrapping a gun, was on a very old version of blender from 2008.

I don’t think watching any more tutorials will help.

I need someone to show me how to properly mark seams on MY model, and how to unwrap it. I need to understand all the steps involved in working on the main pieces, and unwrapping them. Also what is involved after the unwrap. Like how to create a normal map, and how to layer a few material textures on top of one another to get different details.

For example… I have an image of the gun and it’s little screws and switches, however, I want to make the main body of that image somewhat transparent, and only have the screws/nuts/bolts/ darkened. I then want to start with a base metalic texture, and layer the detailed image texture on top.

here is my unsuccessful attempt at unwraping the UV.

and the blend file:

what is the screwed up part at the bottom, is it the barrel? it looks like it needs more seams on that part. for something cyndrilical like that, you need one seam down the whole length, one around the bottom edge loop, and one around the top edge loop. if the barrel has depth, it will need to be the same way on the inside of the barrel as well.
(edit) like so: 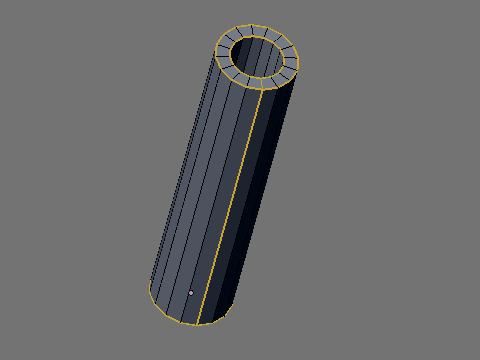 Talking about the barrel, here’s a quick and dirty overview :

What you need to keep in mind is that seams act like cissor cut, virtually your goal is to tell Blender where to cut the model to allow the algorithm to transform your model into a plane with as few distorsion as possible. So the barrel has the 2 side being circular zone, we will place the seams then there : So when the unwrap will “cut”, it will create those 2 circular zones like if we projected from view, as they’re already planar

Now the cylinder of the barrel, how can we make it a plane, by simply placing 1 cut all along it : When we will unwrap, Blender will “cut” there and will be able to make it a plane.

Same for the inside of the barrel, it’s a cylinder too so the seam is placed all along it Now the seams can be a problem sometime depending on how good you texture, so it’s usually a good idea to place them where you’re going to look the less.
By example the seams along the cylinders i would put them under the barrel

Once seams are put there, press U then Unwrap, you’ll see how it end in the UV Editor.
Chances are that it will not be really good to use, but that’s because you’re in Angle Based mode (it’s by default like this)
Angle Based mode is good for organic unwrap (characters, monsters , etc…) but for object with some sharp angle, it’s simply bad.

Change the method from Angle Based to Conformal in the Operator menu : Or Press F6 to have this menu appearing as a popup.

But this menu only appear -after- you unwrapped, if you do anything else, the menu will not be available anymore, you’ll have to re-unwrap to rework.

After that you can move the island (note you can select an island by moving your mouse curosr over a vertice that is part of a specific island then press L ) how you want in the UV, rescale, pack them or average the island scale, it’s all up to what you’re going to do with the texture. one question was unanswered though.

Let’s say I unwrap the barrel like you suggested. When I move the unwrapped pieces aside, how do I go about unwrapping the main body of the gun, and then still having the barrel unwrapped in the editor.

For example: When I unwrap the barrel, I then go to 3d window, mark seams on main body, but by doing so the “barrel” unwrap in the UV image editor disappears! I want to be able to unwrap one piece, then move on to the next piece and still have the first piece left in the editor…

what appears in the UV editor depends on which faces you have selected in the 3D window. one way to sort them out if youre not doing them all at once, is, after unwrapping a piece, put the UV islands off to the side. then unwrap the rest, and when it’s all unwrapped, select all faces, and reposition evrything, so that things are not overlapping, and you are making economical use of your pixels.