I’ve just started using blender a few months ago, so excuse me if my question sound somewhat naive.

I’m doing cartoon-like characters ( or rather anime-like). Obviously, I have to use freestyle.

Problem is, the rendering takes forever. At first I simply took this as a consequence of my complex modeling, or my hardware, but I realized there was a special problem slowing things down.

I render using the command console , and the following line started to appear:

It only took a fraction of a second, but then the same line started appertaining hundreds of times ( with differents edge numbers, of course), While each correction take a fraction of a seconds, the total take nearly HALF (10 seconds) of my rendering time for a single character, which is ridiculous.

I tried looking on the internet for answer, but I couldn’t find any real answer.

The problem happens just before the view map creation phase for freestyle, but after the main image rendering.

So here is my question, Is there a quick and easy way ( or even a long and painful way) to remove the problem, or at least make sure the NEXT models I do won’t be affected?
I mean, the model DOES render, so it’s not a project-killer but…

Important information: I use blender 2.79d, with the blender internal renderer ( and I can’t change).

Anyway, any insight on the how and why would be appreciated!

I will upload a screenshot of the command console so you will see the problem: 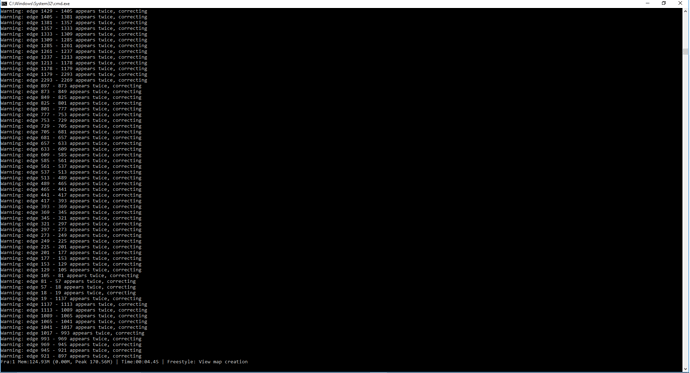