I want to project mouse 2d coordinates to a face that I am hitting with Python. 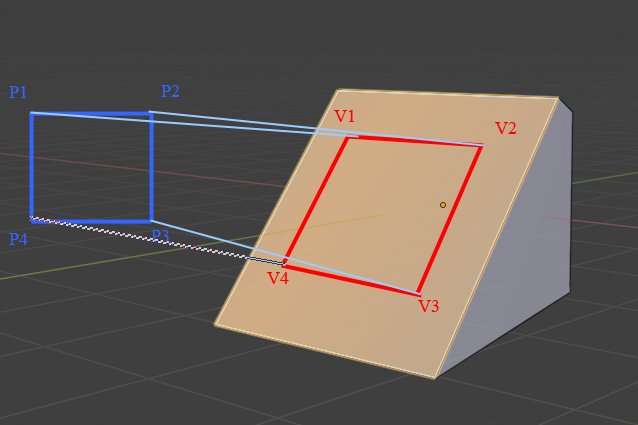 Is it possible to store a rotation matrix of the face that I hit, so that I can always move the vertices along the face?

It should be like that, that I project the first point to the face. Then I add a second, third… vertex and so on, but for these ones I dont need to hit the face anymore, they should be projected to the “projecttion plane” that is defined by the rotation the face in 3d space (hope this is understandable).

I could use the method region_2d_to_location_3d then if I use a region3d as parameter that has the rotation maxtrix of the face, right?

And if I store this rotation matrix, it should be possible to again calculate the 2d points from the 3d points?

Start with bvhtree.BVHTree.ray_cast, save the returned position and normal vectors.

On subsequent casts, use region_2d_to_location_3d to make a line from the camera to a far enough depth to intersect with the plane.

Finally use mathutils.geometry.intersect_line_plane to get the point of intersection between the ray cast and the plane.

Ok, thx, with this I will get a vertex on the face. But now let’s assume that I want to define the second on on the “plane” that is defined by the face but I am not hitting the face anymore when moving the mouse - but I still want the vertex to be on this plane.

And what is the plane for the function intersect_line_plane, where to get it from?

To define an infinite plane all you need is a point in space the plane passes through, and a normal vector to define the orientation. The output of a BVHTree ray cast is a tuple which includes both the point of intersection and the surface normal at that point. Those two vectors define the infinite plane you will be testing for intersections via intersect_line_plane.

Sorry but I have some issues:

Thx a lot. Another possibility is to create the BVHTree in world space:

On subsequent casts, use region_2d_to_location_3d to make a line from the camera to a far enough depth to intersect with the plane.

Last question hopefully:-) What is the depth_location parameter, where to get the vector from?

This is the function that I call for subsequent casts, when the first vertex is snapped:

This almost works, but the location calculated doesnt exactly match with the mouse cursor location.

Here’s a diagram of what I’m talking about. 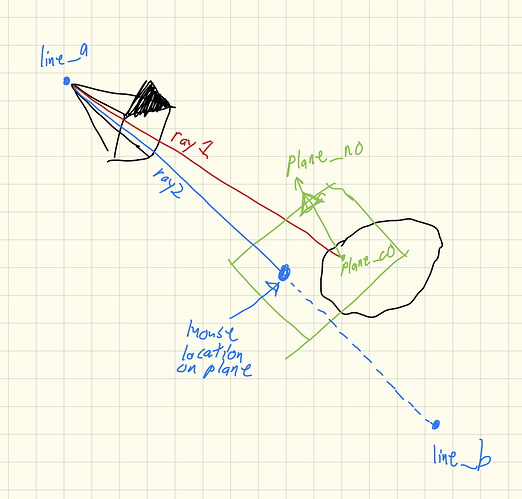 IMG_0156.jpg1405×1345 429 KB
You can get line_b a few different ways, the only requirement is that it is directly under the mouse coordinates in the viewport and it needs to be further away than the plane you are testing.

I’m not 100% certain how region_2d_to_location_3d aligns the result with depth_location so it might take some experimentation. The alternative would be to multiply the viewport vector by some amount and add that to the camera position. That’s the approach I would take to be certain that the line is aligned with the mouse.

Thx a lot, I got it and made a video about it. It’s a bit different than your approach but works nicely:

Blender 2.8 video tutorial : How to draw into the 3d viewport and snap to a mesh’s face - https://youtu.be/cuZZnT5MQQ8

Some drawback of using region_2d_to_origin_3d?