Hi Everyone,
still I don’t know which technic is more interesting for me - 2d or 3d,
so I really happy that on the blenderartists is “Traditional” section.
Here are some of my 2d artworks. What do you think about it?
Comments and constructive criticism are most welcome.

Portals
(It’s my first landscape, all done in ps ~8h): 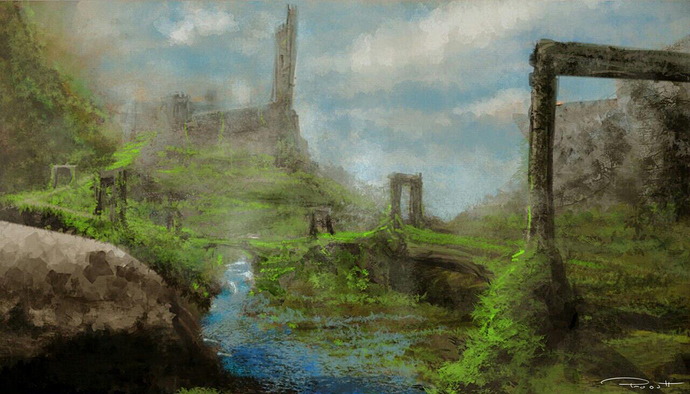 Portraits
(Drawn in Krita, edited by ps ~6h for each) 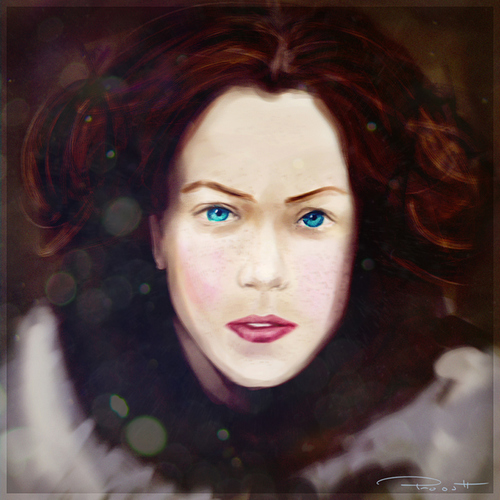 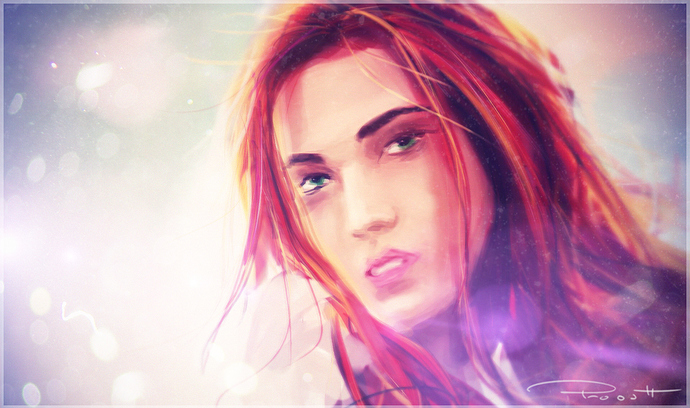 Edit: posts appearing after my reply. This was to comment about the landscape image in the first post

Detailed parts on the foreground are the first read (I looked at the bottom middle part first) but everything else in the composition points to the structure in the background:
Path leads to it, clouds and water point to it, so does the mountain/hill on both sides and horizontal beams on the foreground. The viewer really wants to know what’s in the background and since it’s a low detail tertiary element the whole image is a bit of a disappointment.

The image is named “Portals” but these portals aren’t that interesting and they don’t fit in to the composition that well, that’s why I think it misses on a idea of a great fantasy landscape. If it’s about the portals those should be more dominant on the image and maybe tell more about what there is to come. Could also completely change the image to be about the structure in the background.

Not bad as a first. You’re creating illusion of detail and handle values. Painterly look works too but I think it works better on the scaled down version of the image.

JA12 there is a lot of truth in yours words, and one of the reason, why the background is low detail is that, still I have lots of problem to put my visions on the canvas (to low experience in drawing). The second problem of my landscape is that, when I have started drawing it, I haven’t idea about story I wanted to tell (only I know that I want to draw green landscape with the river). Big thanks for comment.

one of the reason, why the background is low detail is that, still I have lots of problem to put my visions on the canvas (to low experience in drawing).

You most likely know these things already but to avoid misunderstanding, I was commenting on the composition. Background elements wouldn’t be very detailed (less detail relative to the foreground) in the original composition, especially if there is a lot of athmosphere or even fog/mist/smoke.

Don’t take the following the wrong way. I don’t mean to be condescending or anything, I’m certainly no expert on these things. Throwing this in so that I’m not just giving negative feedback but try to leave something that might actually help.

If you’re not starting with a sketch, or even if you are, could try blocking major shapes with some big blobs in the beginning to see how they get placed in the scene (basic composition). I mean really quick, big brush, zoomed out and using just few different values to clearly place them in perspective.

For the original image that could look something like this 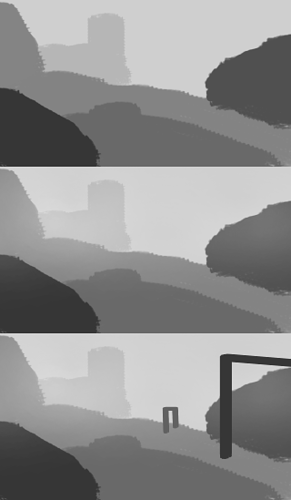 Might not know what those things are yet but might be able to see where to put your main thing that you want to show and if the elements around it support the chosen placement. In case of portals, you might notice at this point that their placement is not good to be the focal point of the image. Or you might conclude that yes it is but the point is that you’re making a decision early on.

That could be one way of avoiding composition issues when going further and might even help to give ideas on what to put there since it’s not a blank canvas.

Very cool. First one gives off the concept vibe, like its a concept landscape sketch for a game. Really like it–good effects.