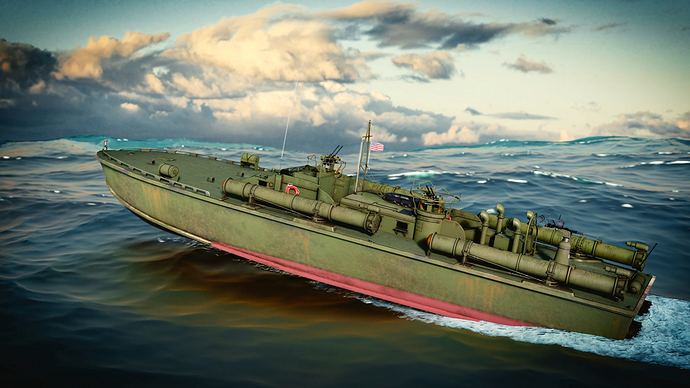 This depicts PT-109 departing its base in the Solomon Islands on the evening of August 1, 1943. Future President of the United States, John F. Kennedy was in command of the boat. The mission was to patrol Blackett Strait of the coast off the Japanese held island of Kolombangara during the night of 1-2 August looking to engage Japanese ships and barges referred to as the Tokyo Express.

It’s a long and interesting story, but about 1 am on 2 August, the Japanese destroyer Amagiri was steaming through the dark night at about 40 knots when it collided with PT-109. The commander of the Amagiri didn’t realize he had hit the PT boat. Two of the 12 crew of PT-109 were killed. The others survived but it took eight days to finally be rescued.

Although his back was severely injured, Kennedy eventually took command of a second PT boat. However, he was ultimately given a medical discharge and returned home.

It is an accurate model of PT-109 including the major screws and bolts.

The scene around it, well, not working. It’s just glaringly CG. If the bow really were raised that much the stern would have to be sunk much deeper, the ocean itself feels off in many ways and the wake is not right at all. The background clouds seem very much painted on. In short, the scene is taking away greatly from the insanely, jaw droppingly awesome boat.