Featuring some digital drawings I made for a composition challenge back in 2017. Mainly made with Inkscape, in anime/cel shading style mostly, using fanart characters. Posted on my second DeviantArt account -sporubyk- you can also see the complete submissions on [this folder]. 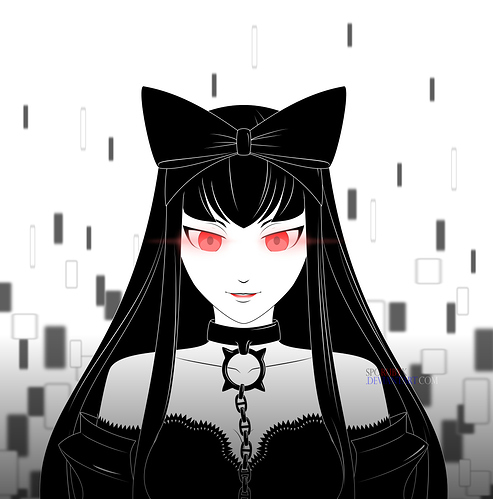 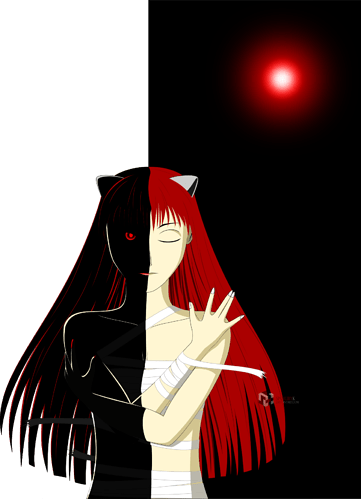 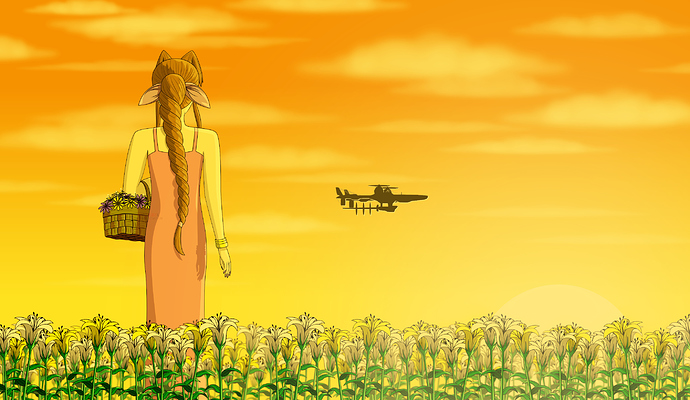 Theme: scene with full background. Character: Aeris/Aerith (Final Fantasy VII). Making the lily flower field made the program stopped several times as it seems I put too many objects in a group… Resorted to using exported images of some flowers instead of copying vector objects manually, compositing it in GIMP along with some effects and finishing. 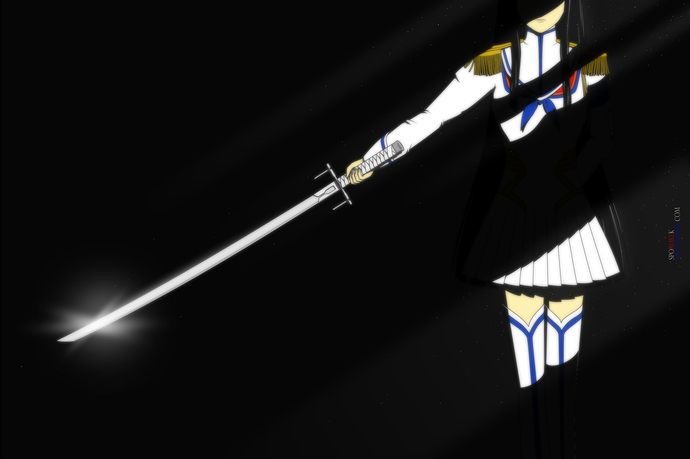 Theme: dramatic lighting. Character: Satsuki Kiryuin (Kill La Kill). Covering most of the body in shadows after making the complete shapes felt like defeating the purpose of making a full body drawing, lol! Version with no shadows is [here]. 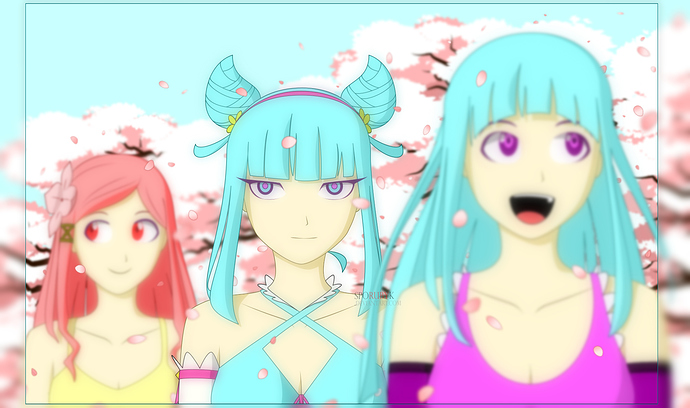 Theme: group. Character: the girls in [Me!Me!Me!] and [Girl] music video (warning: mature contents). Using blurs for foreground and background characters to bring focus on the girl on the center. The blurred border effect was a last minute idea. 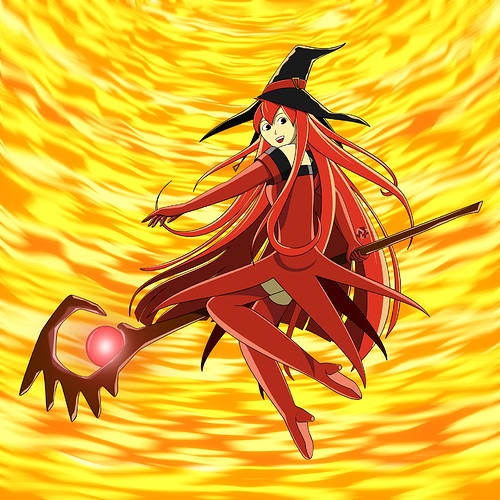 Theme: low angle perspective. Character: Cierra (Riviera : The Promised Land). I must admit this might not be too well executed, in terms of connection with the theme. The [high angle entry] is done better… Used Blender for the fiery background. 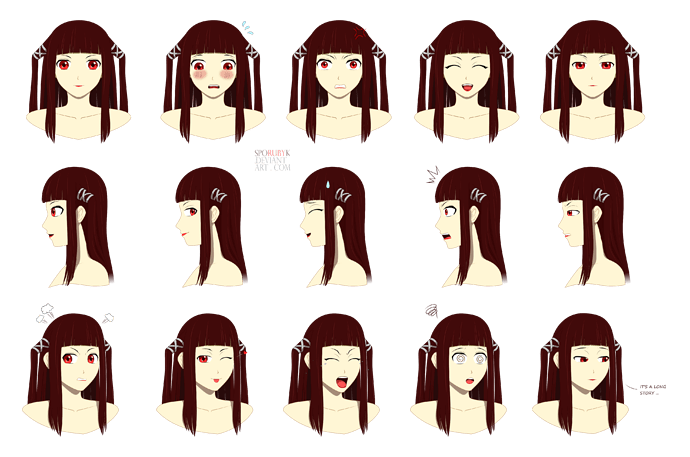 Theme: sketch page. Character: Rubi Tojo (Rosario to Vampire). Variation of expressions using front, side, and 3/4 view (because using front view for all would be boring… plus also serves as a practice). There are a few variation that don’t get shown here though.

Currently I’m still working (read: struggling) to complete the 2018 challenge edition. Might upload it later after finished, maybe next year.

Hope you enjoy it!

Here’s a banner of some personal favourite 2D artworks of 2018 :

Mostly from a composition challenge, one from a contest and another one is a gift. Will be featuring some select images in full resolution later on.

The continuation of the composition challenge on the first post, now the 2018 edition. I mostly do full body drawings and some with complete background as I wanted to push a bit further, compared to the 2017 challenge that I did more ‘leisurely’ (a.k.a some were mainly made just to fulfill the required theme). This also turned out to be pretty much time consuming and exhausting, which I think affected some latter drawings. Complete entries can be seen on this folder. Using Inkscape mainly, sometimes finishing with GIMP, and there are some secondary elements that were made with Blender. 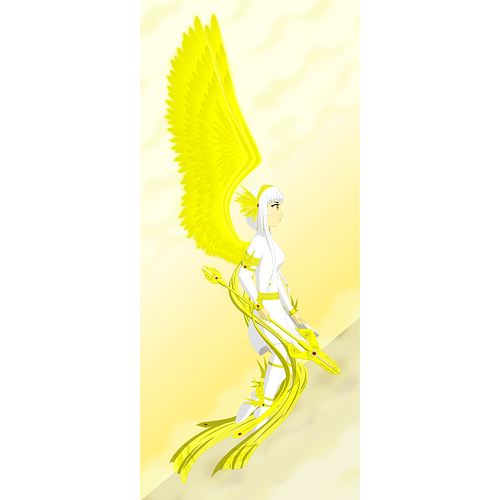 Theme: arabesque. There is a more detailed meaning to the theme but the one used here is more simplified as sweeping s-shaped line of action. The ‘S’ pattern here is formed along starting from the wing, to the scepter/weapon, then down to the shawl. Was about to use a spear but resorted to a shorter scepter-like object instead so as not to disrupt the flow too much. The red pearl ornaments on the outfit and weapon serve as guide points. Took most of the time detailing the patterns. It was fun though. Also, this is perhaps the most portrait-orientation-ish image I’ve ever made. Note that I added a white side borders here as the preview looks very much cropped. 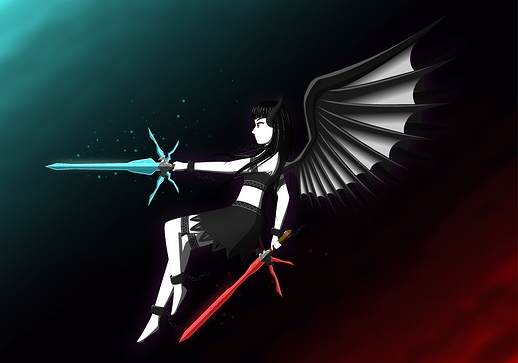 Theme: contrast. I used difference of dark and light values, along with complimentary colors (blue and red for the swords) to represent contrast. Also playing with contradiction between monochrome (the character skin tones) and colors (the swords). This was also meant as a counterpart with the previous entry/image above it (arabesque theme). 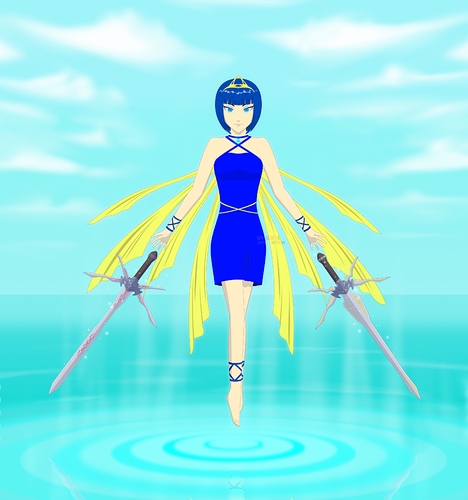 Theme: pyramid. The objective is to lead the view flow in a triangular path. Using the swords mainly to guide the view. There’s a little story involving a riddle, you can read it on my DA page. The correct answer is to ask for the blue pearl on her necklace, not either of the blades. First hint: her pose is a clue to this (intersection of the straight lines from the swords is on the pearl). Second hint: never did she state “choose one blade”, she only said “choose wisely”. Third hint: “… a world of peace” is another clue (world = planet = sphere). By the way, the weapons here are the same as the one used in the previous/above entry (contrast theme), hinting a connection somehow… dun dun dun 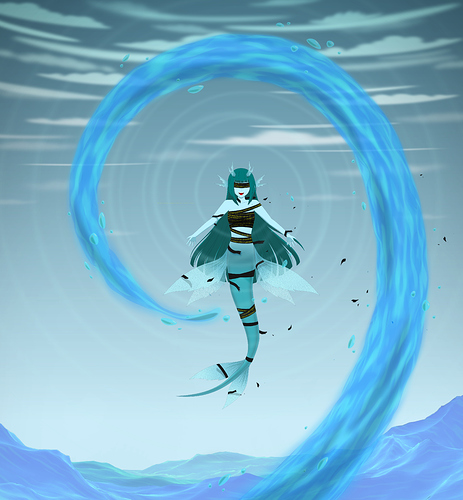 Theme: environmental frame. Using curved/spiraled water column that enclosed a Siren Queen that celebrates the breaking of her seals by singing you a lovely lullaby

… I wanted to do a full circling water effect at first, but I noticed then that the shading would be difficult. The sea water effect is made with Blender using ocean modifier, it helps a lot. Still not too satisfied with the blue tone here though, especially the sea. Spent some time in searching font types that can represent rune inscription that is not Symbol font type (used ‘Symeteo’ font in the end). The export process to image files was surprisingly taking so damn long, had to decrease the resolution in the end. 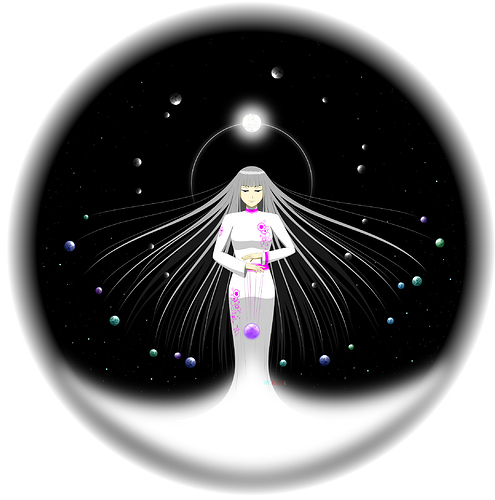 Theme: radiant. The concept here is long hairs with planets on its tip, much like puppets on strings. Ended up not as much as what I imagined the first time though. The grey planets are dying that brought back to life by the goddess character, turn them into the colorful ones. 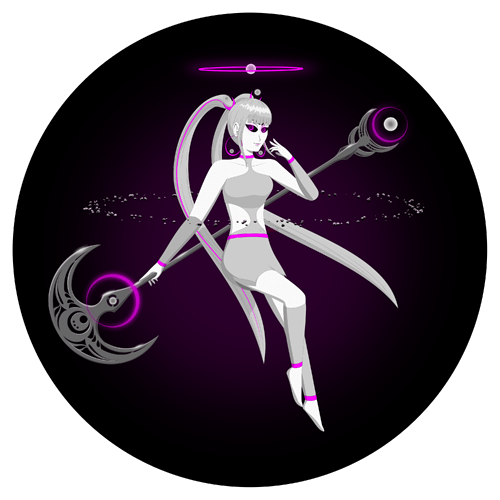 Theme: dynamic symmetry. The task is to use this guide lines. This theme is kinda difficult to complete, in terms of using some of the grid lines to compose a scene or character. Finally got an idea with a double ponytailed character with a scythe-like weapon surrounded by asteroids (that made in Blender). Note that this is the same character with the previous ‘radiant’ theme entry, but in her bad-girl version. Maybe a sequel to that, or even a prequel. 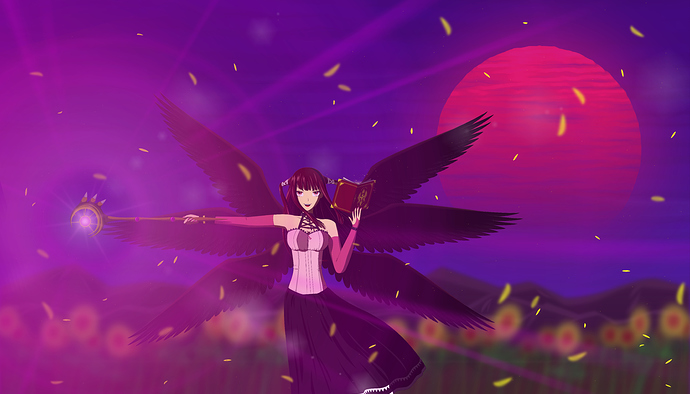 Theme: redraw. It’s that ‘take-a-look-at-your-crappy-old-drawing-then-cringe-a-lot-and-try-to-right-all-the-wrongs’ theme this time. I made a redraw of a character that I did long ago. It has some serious problems, to name a few: body proportion is off, expression/emotion doesn’t show up clearly, and there’s no shading at all. I remembered that I was quite proud of that one though, especially the wings. Mended those ‘mistakes’ now, added background too and more effects. Had lotsa trials about that last one, actually still somewhat unsatisfied, but gotta wrap it up already.

Anyway, the 2018 edition challenge has been completed! The newest one for 2019 has begun already, I’d try to take part again, but I want to take it easier this time.

Doing Inktober challenges for this year, though I wasn’t doing it daily but only weekly as I already had some contests/challenges going too, selecting one topic for that week. These are all done in Inkscape. 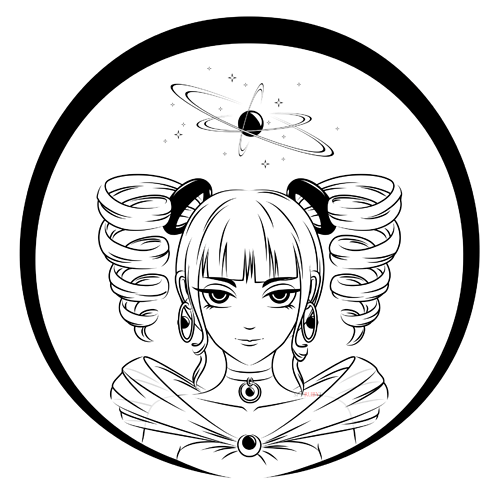 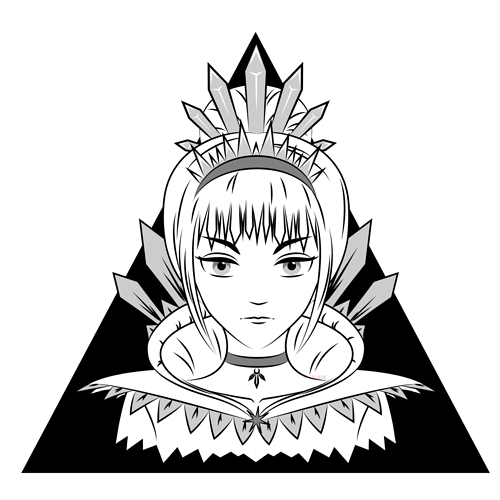 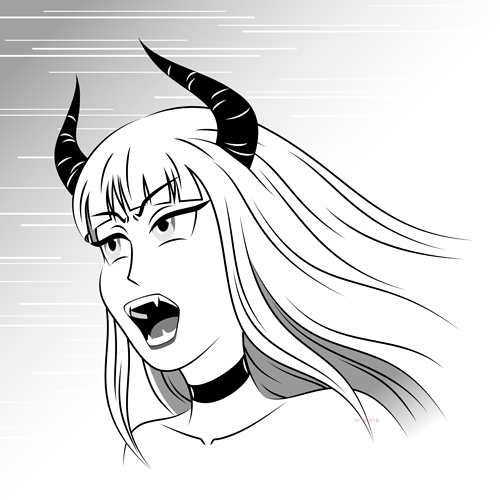 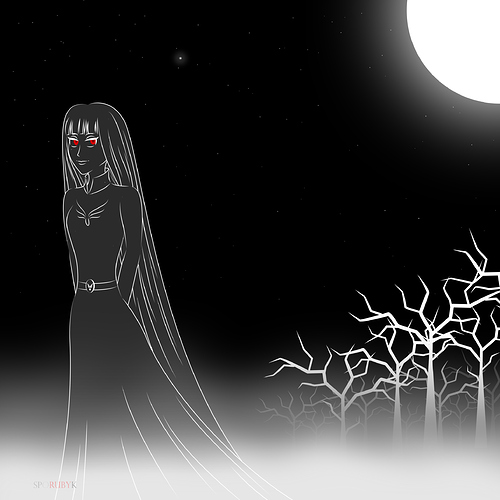 Continuing the composition challenge, now for 2019 themes. At first, I aimed to just do some simple scenes/compositions without using too many complex shapes or shading, but this didn’t last long, as starting from around the third month it got more complicated compared to the previous ones, lol. Done with Inkscape, some effects and finishing with GIMP, there’s one animation too made with Blender. Complete entries is in this folder. Theme: animated drawing (or animation in general), you can view the animated version here (as I’m not sure the video is uploaded correctly here). The animation part is rather simple, only on the rotating patterns. Been trying out using simple manual animation, but upon realizing I had to do the rotation manually for each frames I then jumped to Blender and let it interpolate the movement/rotation automatically, and I need to take care of the keyframes on some frames only. Theme: shape. Using semicircle patterns/shapes here, with the word ‘arch’ chosen for the title as it has both the meaning of the shapes and also signifies a high ranking that represents the character’s position/status (countess, princess, etc.). The concept itself went down from a full body at first (but it seemed there will be much wasted space), then to waist (still felt too much), and finally just a bust. Compensated the reduction with making intricate patterns on some elements. Theme: sketch page / collage. Featuring character Illumia that created on last year challenge. Using this theme to practice on expressions. Not using shading here, which was actually made in such way in connection to the character traits. To be honest I always feel more enjoyed in making shadeless sketch like this compared to a fully rendered one. Theme: study. Was about to study values at first, but then ended up with studying about hands. Studied some references, and summed them up here, while this is the base sketch. After done with some practices, proceeded to apply it using a fanart. Nico Robin (One Piece) is very suitable due to the Fleur ability that allowed her to sprout many limbs like hands. Thinking of adding more hands actually, but some of the time already spent on studying references. Theme: scribble. Almost similar to a last year theme, but this time is making something based on a self-made scribbles (see below). The fourth one is the one I used, next is the overlay with the finished product. Initially thought of using the first one but seemed too general. Theme: duo / group. Basically making at least two different characters interacting with each other. Featuring the Sentry and Demoness character from composition challenge in 2018 (you can also see them on some previous posts above), been always wanted to draw them together in one image. At that time, I was also making a contest entry and doing Inktober too so I didn’t aim for a fully rendered drawing or else I’d be too exhausted… Instead, I was trying some kind of ancient drawing on parchment effects. I didn’t do detailed coloring/shading, but had to make some non-existent ancient font/writing to complete the scene.

Theme: new subject. Drawing something that I am not usually do it, that was the objective here. Was about to draw cats at first, but after some more thinking, I tried on drawing weapons instead. The bazooka/gun was intended to be much bigger initially, but scaled down then to get a better composition and more realistic size. Enjoyed making the gun, so I didn’t regret switching the topic. Seeing it’s looking good made me want to use it as reference and bring the gun to the third dimension, but let’s see later. Theme: freebie. Free to choose any topic, but from this challenge, either the 2018 or 2019 themes. I chose the ‘minimalist’ theme, which was in last year challenge, so as I won’t need to do too many detailing, also because I was not satisfied enough with the previous result (which is the first image in this thread, btw). Character is Rory Mercury from GATE anime series.

And that completed the 2019 challenge, yey! For this year (2020) I might not participate that much in challenges or contests (the same goes with my 3D works), as I want to do more personal works, also thinking about doing more non-fully rendered simple drawing. Anyway, hope you enjoy this simple gallery! Will keep updating it later.