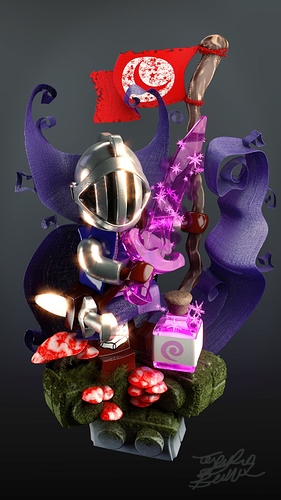 Sorta half-way thought about entering this thread with a cheesy poem to hone in a medieval vibe but I am not good at that, so I’ll leave the image to compliment itself (and hopefully you guys!)

I began this project with the idea of going for a photorealistic render of the character, and for the whole first day I was modelling pieces off of references, as seen with the blue pieces in the image below. By the way, if you’ve never tried, it’s very difficult tackling any sort of LEGO modelling (I would suggest it just for general 3-D modelling practice, really) if you don’t want it to have that low poly ldraw look (http://www.ldraw.org/), especially if you want all the verts of the object for every piece to be connected instead of just overlapping, so that the bevel modifier actually has an effect. So with that in mind, I learned some interesting techniques throughout the process of modelling these parts. However, I was stumped when it came time to working on closing the hole on the back of the leg accurately… and yeah, I know it wouldn’t have been in view of the camera in this project, but the idea is to use it in the future too and crap so ehhhh… I know if I kept it the way it was, I would just avoid showing the back for all my future projects that might call for it. And besides, at this point I was half-deciding to go for a more stylistic approach, anyway! So I just ended up trashing the legs until they’ll be in working condition, and remodelled absolutely everything with some cRaZy sexy curvy proportions! (I think it complimented the cape quite well.)
(So basically all those blue parts have been entirely replaced in the final result. Well, besides the head. I didn’t feel like making one since the helmet covered it all. And if it didn’t, the knight is magical so he can live without one anyway, ehh? Excuses excuses)

Oh, also if you were interested in seeing the torso print by itself, or a sketch of the cape, or just the knight without a cape… there ya go below! (hey rhymes) 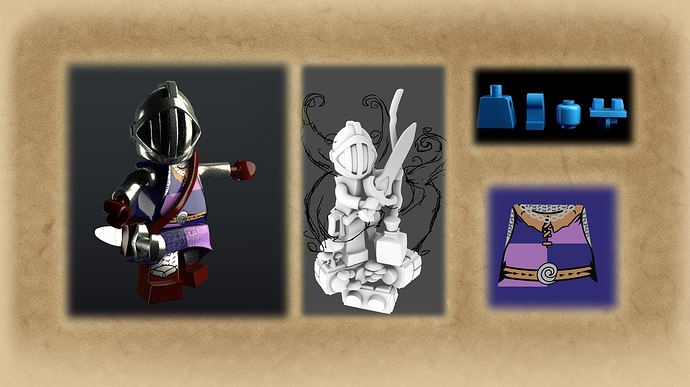 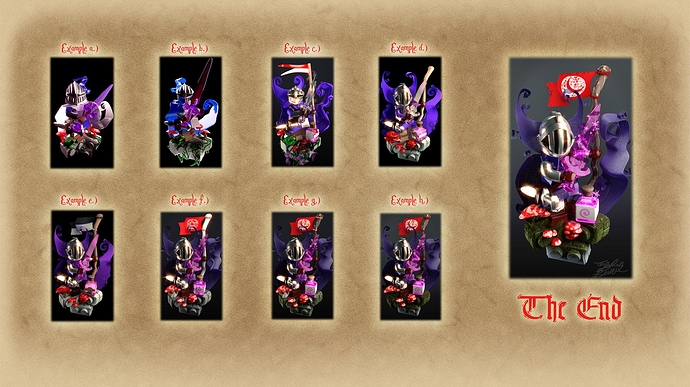 Please leave a comment or critique below! All is welcome!

I love the moss/textures, they’re wonderful!

I love lego, and this knight is incredible! The model is full of good ideas and well done, and the materials are especially great.

The mossy legos look great. The light bloom on the knight is just a touch too intense for my taste other than that A+.