Here is a project I am working on. It has been a bit of a learning project. While working on it I have learned how to uvmap a model, and I’ve done a lot of experimenting with lighting / composition. In the past I have only really dived into the modelling aspect of things with no regard for materials, lighting, etc.

What you see here is a rough draft. The idea was to make a plane with a similar layout to the Rutan Quickie, but aim for a sleeker, bigger, more powerful appearance. I intend for the final version to be very similar, with little added details like having ailerons and elevators. Today I discovered that if you separate part of a uvmapped mesh into a new object, that part still keeps the uvmapping - that made me very happy because it should make making ailerons easier than I expected. I might even go all out and make a detailed cockpit, we’ll see. I wish I could have rendered these in cycles, but I’m using xubuntu. 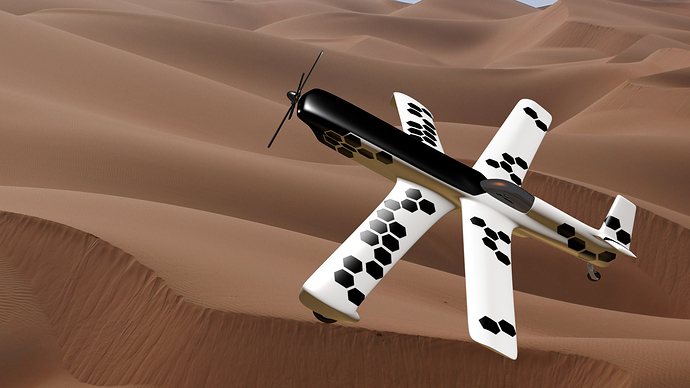 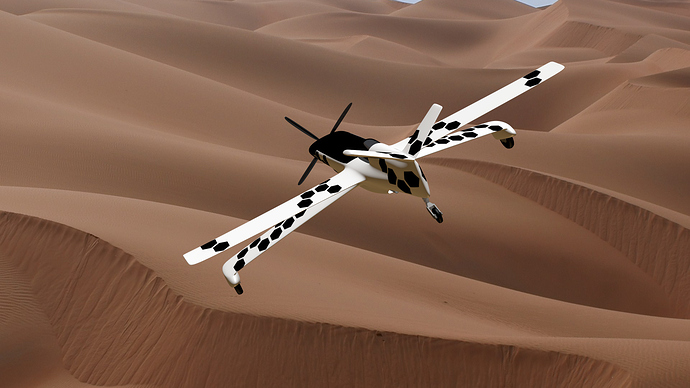 I managed to separate the ailerons and rudders. The hardest part was achieving separation without distorting the uvmap. I tried marking edges as sharp but where there was supposed to be a corner I just got a weird open gap. I tried doubling up on vertex loops but the skin got too stretched. Finally I used the edge crease feature and that seemed to work OK (still SOME skin distortion).

I want to set up the ailerons and rudders so that I can easily change their angles for different still renders. I am assuming that would be accomplished by some sort of rigging (or constraints?) - which I am researching. Please forgive my noobness, I’m rather capable with CAD software, but for modelling software I’m sort of having to rewire my brain.

Now to get a convincing blur on the spinning prop, I am assuming I have to animate it to spin, apply a motion blur effect, then render a single frame?

If anyone has any criticism I would really appreciate it. 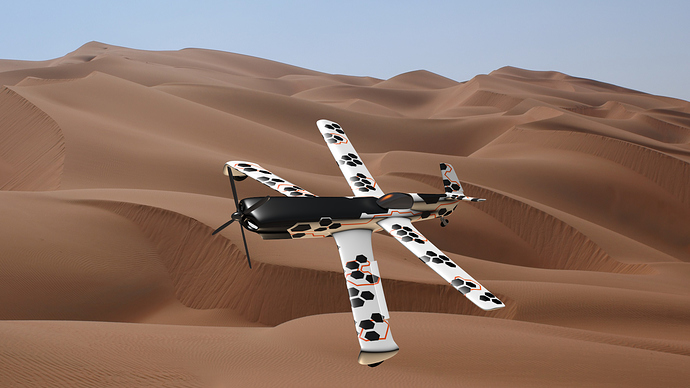 Please forgive my noobness, I’m rather capable with CAD software, but for modelling software I’m sort of having to rewire my brain.

Me too, when i started using Blender i was so lost :spin:. CAD and modeling software are similar but completely two deferent things.

Cool model by the way, looks like a dragonfly.

And thank you. It reminds me of a dragonfly too.

I finished rigging the control surfaces. I think the next major task will be making a cockpit, so I can do away with the opaque canopy. 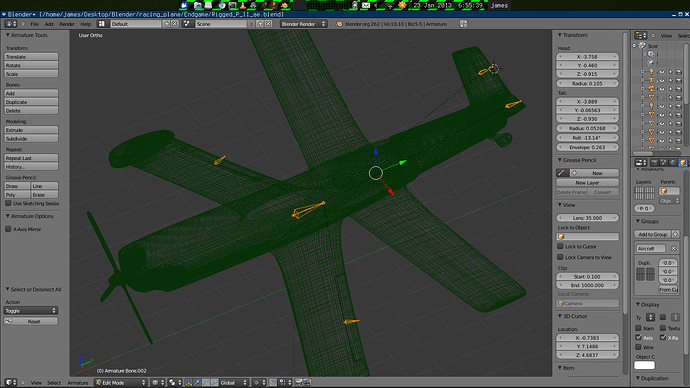 Well I think it is finally done. I tweaked it a bit by adding a little rim that goes around the edge of the canopy, making the canopy transparent, and resizing the prop a little. I also added a basic cockpit.

In my next project I intend to learn more about texturing, maybe take at stab at understanding and utilizing bump mapping.

Anyways, some shots of the finished product are below. Please feel free to voice any opinions, comments, or even critique. 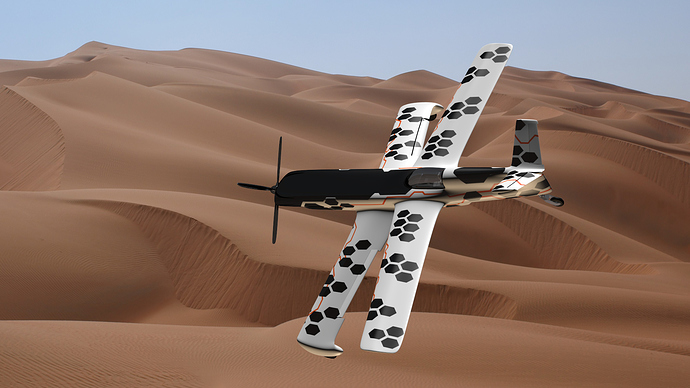 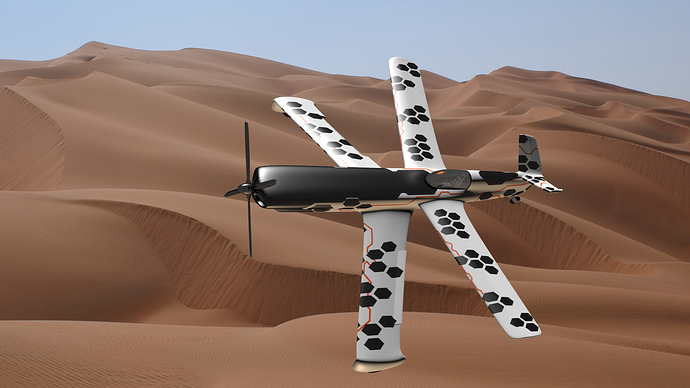 Looking sweet! I find that this is a very interesting design concept! My only opinion is perhaps that the background is a little too distracting, perhaps blurring it a little could help bring out the aircraft design. Other than that, awesome work!

Thank you for the compliment and the suggestion. I tried adding some blur and I think it was a great idea: 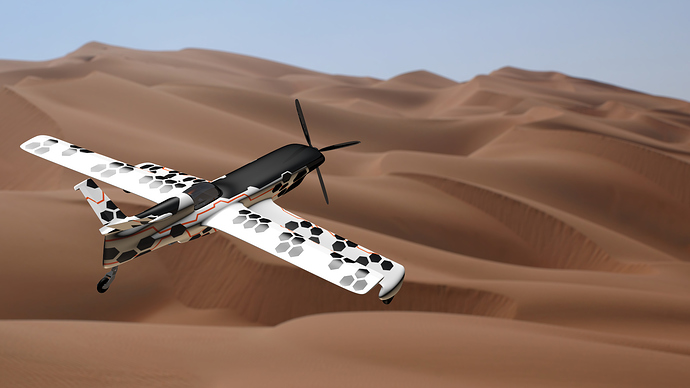 [SUB]I also wanted to note that the desert photograph is not my own work. It has a GNU license on it which allows anyone to redistribute or modify it so long as the author is given credit. The photograph belongs to wikipedia user Nepenthes.[/SUB]

I am not too keen on you materials… Wait, are you using the photo for reflections? IT doesn’t look like you are so the plane is not fitting exactly in. Is the sky pat of the photo? Not sure if that color is appropriate… esp when looking at the plane’s wings.

Oh and ya need some blur on that prop! … unless the plane just stalled…

The materials of the plane itself? Does it look too plasticy? Or maybe too shiny? And I tried to use the photo for reflections. It kind of showed up on the canopy. When I set the background image I learned that it wasn’t going to reflect onto anything, so I put the plane (along with the camera and lights) inside a giant sphere that had the photograph as it’s skin. The sphere has a rectangular cutout in it so that the camera never picks up the sphere itself. I don’t know if this is the best way to try to get reflections. The sky is part of the photo, do you think that if I added some blue to my “sun” light source the color reflecting on the wings might look better? I also put an area lamp under the plane which emits tan light, the intent being to simulate light reflected off the sand.

I hear you on the prop! It does look like it has just stalled. I’m working on figuring out how to get it blurred. Thanks for the critique btw.

I managed to get some blur on the prop. I animated it to rotate then rendered it with motion blur. It takes like 8 minutes now just to render what you see below 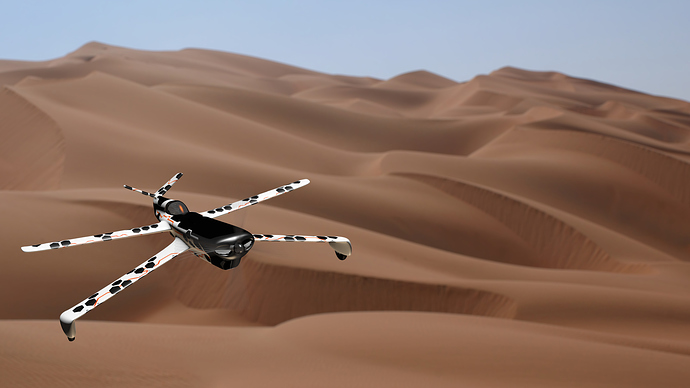 I’m sorry that first attempt at blurring didn’t look very good if you ask me. I did some tweaking, set the motion samples to 30, shortened the shutter time, hit F12, and about 50 minutes later the following was ready: 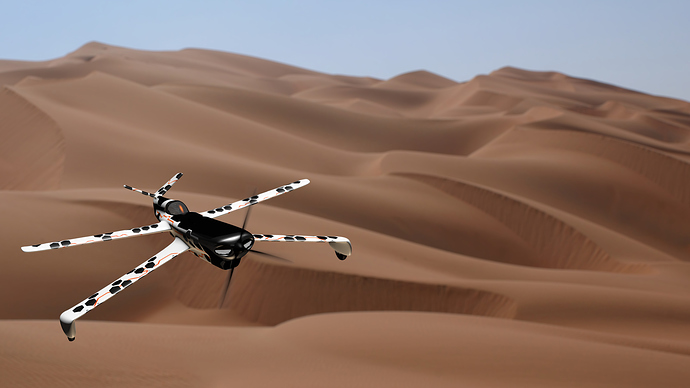 I think this blur looks a bit better.