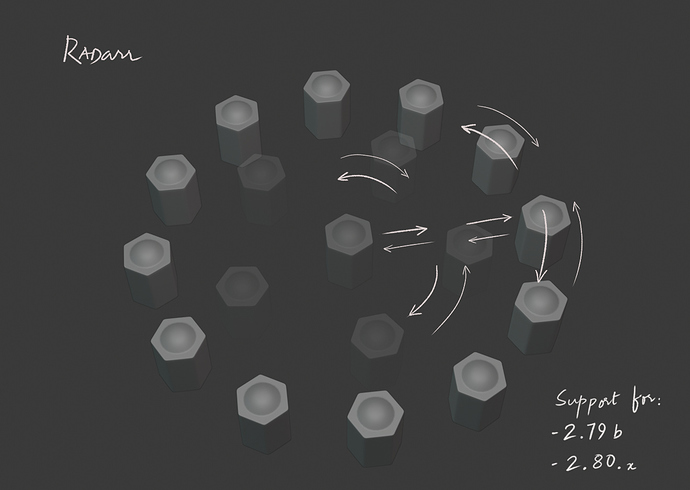 RADarr is an adddon which helps in creating radial array in much convenient way(s) for artists in many different use cases and it comes along with few related functionalities and additional useful features (in Advanced version).

Usability and user experience have been kept as one of the foremost goals while creating this.

*Those who have chosen the Basic version first and now want to procure the Advanced version as well; also happens to keep all their purchases within same Gumroad acount/library, please get it here.

But before you start installing and using the add-on, please have a look at few of the short demos here… along with a quick-start manual (believe me you will have to go through it only once and it takes just a few minutes of your read time). 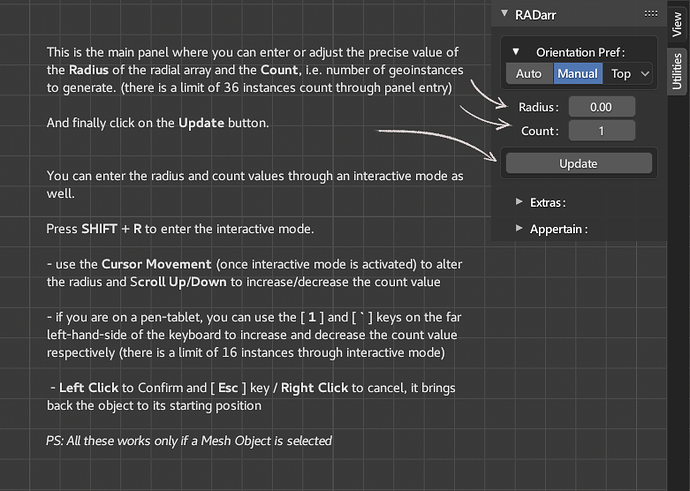 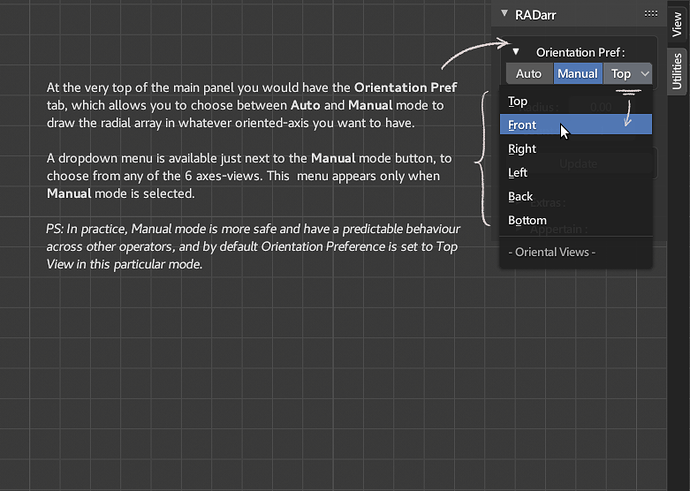 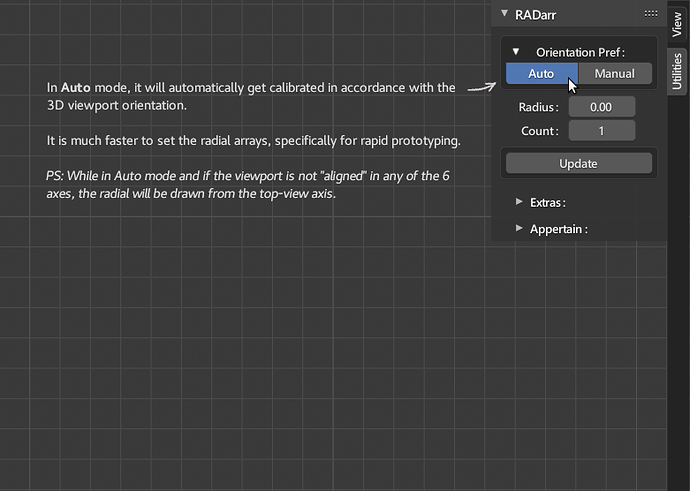 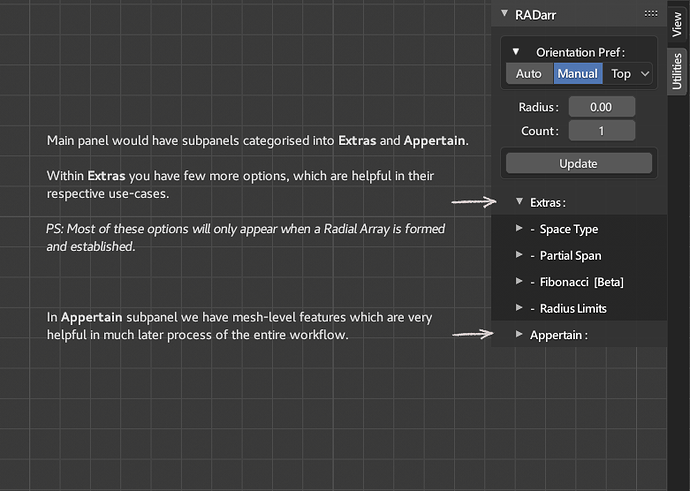 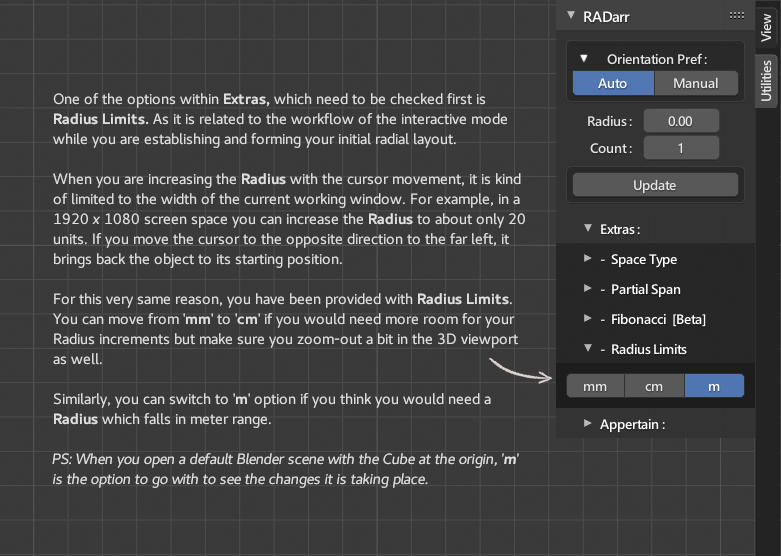 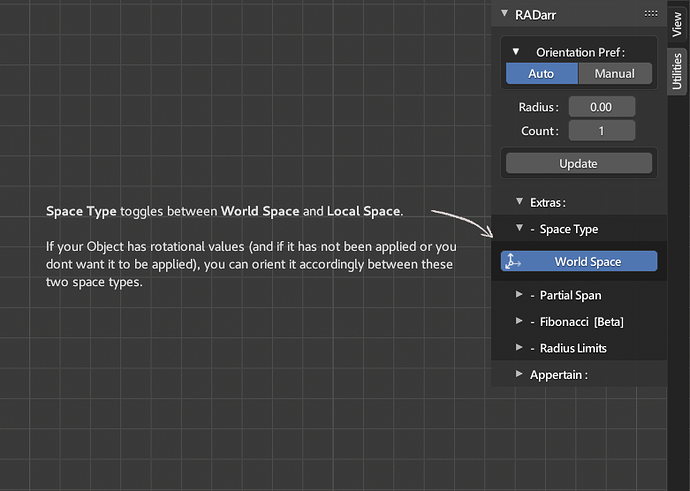 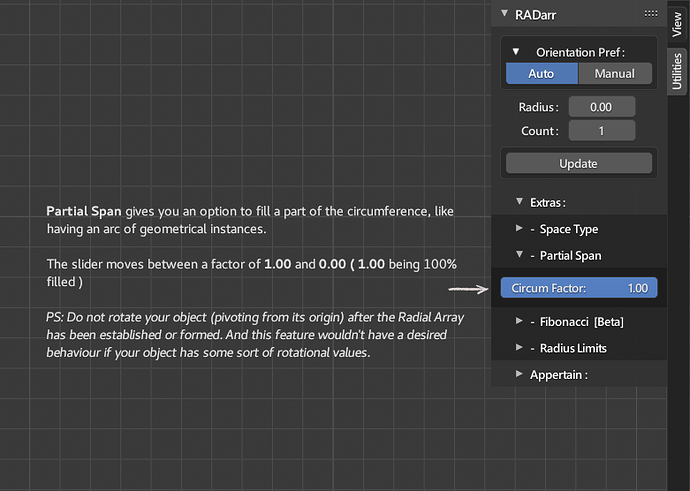 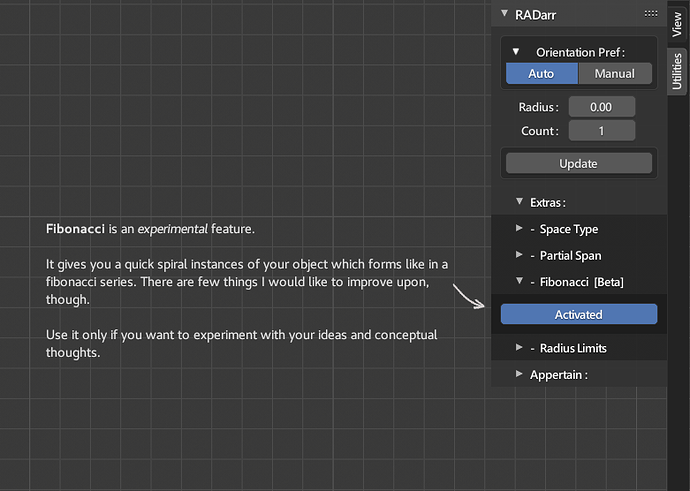 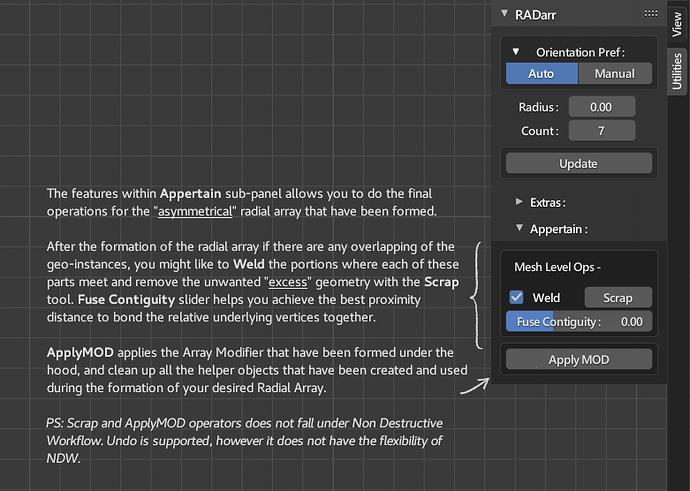 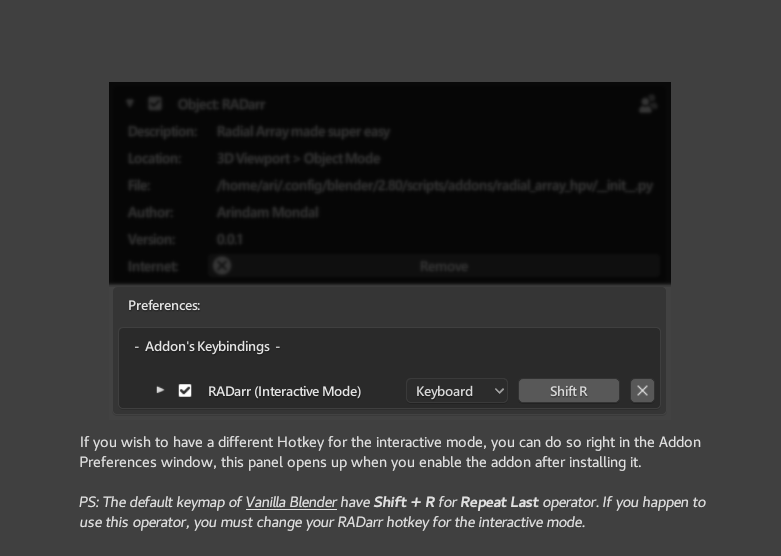 Very nice! Producing such arrays easily was a need in Blender, indeed. So, it is very helpful to have such a tool. Thanks!

Tank You for the addon.
I use basic version. Every time when i delete object i have this error:

i use latest blender build

It looks like you are deleting one of the helper objects (most probably, it’s the main parenter here).

Do not delete any of the helper objects, they are just “null” objects. These objects doesn’t get rendered and have almost negligible memory overhead.

And here the main parenter is used to move around the entire radial array formation that you have created.

Solidworks has these options:
Instance spacing allows for specific lengths between instances.
Equal Spacing allows for equal spacing within the overall angle (360 for full circle and less than that for working within a smaller section) Perhaps the partial span can be addressed in terms of angles or radians instead? 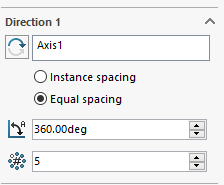 Also- Does this addon work to automatically create a rotation axis at the origin of your mesh?
Does it work in edit mode and would it automatically fuse vertices that overlap?
Great work

With much appreciation and a desire to support further development I bought the advanced version of Radarr. Very awesome. I wish the core developers of Blender where a bit less stubborn about adding frequently requested tools such as radial array to the application. Glad you took the initiative and gave all of us a practical feature patch.

I second that. Sometimes @developers decisions are beyond my comprehension level.

Thanks for this add-on, but still, this should be in master.

I have this error even when i dont use RADarr.

Really loving this add-on! Why this is an anti-feature in Blender I will never understand. Bought the pro version to support you.

If I may, I’d like to request that maybe in the future you consider extending the functionality to replace the way the Curve modifier works. Two things I do frequently in my modeling are radial array’s and having to warp a shape into a circular shape. Think of it like if you were to model a wheel and you modeled the tread flat but you wanted to wrap it into a circle. Or if you think of modeling the spokes of the wheel and needing to be able to adjust whether the shape you made has 4, 5, or 8 spokes. Feels like maybe it would be an extension of this add-on at some point?

What is the difference between the “Basic” and “Advanced” versions?
I really wish something like this was in blender!
Thanks.

I second that. Sometimes @developers decisions are beyond my comprehension level.

They are fighting very different battles. Most importantly, they are doing the ground work on which very specific tools like this can be easily built by anyone.

True, they are, and I do appreciate the core developers work. Especially on transforming Blender into 2.80. Which is why I am a silver level donation fund member.

I am also going to express my elation when an independent developer/user creates an AddOn/script that alleviates my frustration with missing core tools.

gotta love a fun name! Keep it up!

I already bought the advanced version so now I can’t

I do not see a difference chart between the two versions at gumroad.
Usually when there is a free and paid version of something, there is a chart listing features that are included for each one.

Thanks for any information and help on this before I purchase this.

Thank you for all your wonderful support.

@XYZero, @NinthJake I really didn’t anticipate that I would be asked this question so many times in just a day. So here is what I stated in one of my tweets. 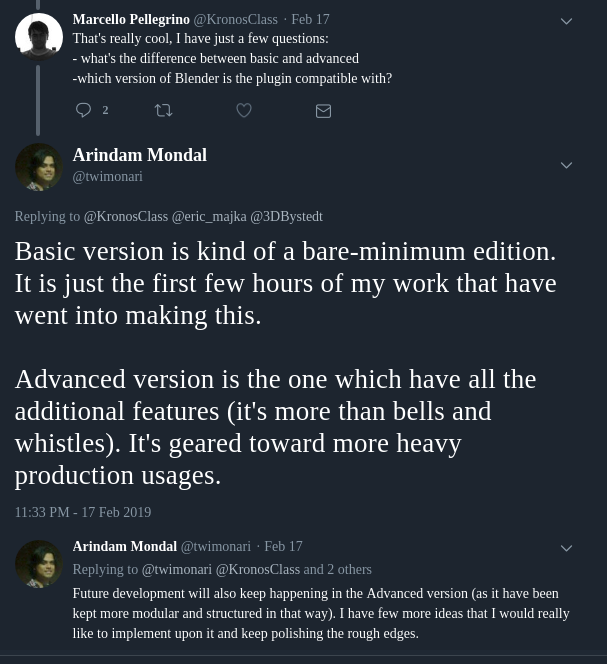 I don’t have any difference-chart of the two versions as of now, however, if it’s that important I could make one and add it to the OP.

Meanwhile, as a visual clue… the panel of RADarr Baisc looks like this, nothing more - nothing less. 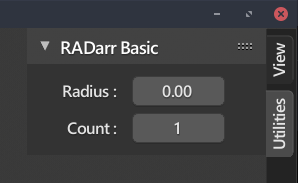 Whereas all the features that you see in the short demos (along with the Interactive Mode) in the Opening Post is what you get with the Advanced version.

@parel I would definitely see to it if your feature request can be included into the design paradigm that I am trying to develop and follow. Great suggestion by the way, I appreciate.

As of the other two questions,

@Dheim What you are trying to achieve through Curve modifier is kind of possible with Simple Deform modifier as well, I think…

Of course, I will see to it if this can be very much part of or as an extension of RADarr at some point in time. Thank you for your valuable suggestion.

@Pinhead It should be alright now, you can get the updated version from the same link above (You all must have recieved an email regarding this as well).

It was just a minor bug, nothing serious. Kind of an error that throws up during a “predicate check”.

About the thing of anti-feature that Blender Foundation have decided upon this, I would just like to say… there are doing the right thing. They are not being stubborn, they know what it is in the best interest of greater part of all end-users.

I will come back to it, once I tackle the issue of performance hit (when you want to go crazy with the count number of geo-instances or maybe fiddle with a very high-poly object) in a more meaningful way and take the discussion from there onward.

Thanks Arindam for the reply, great addon you have here.
So, “Advanced” features are the "Extras? 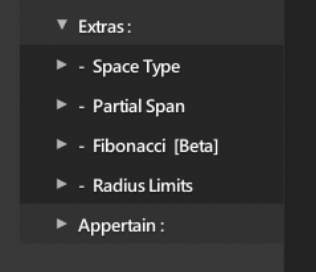 Looks like I’m buying then!
Am I not seeing anything else?
Just wondering.
Thanks again for your hard work on this.
Looking forward to future updates.