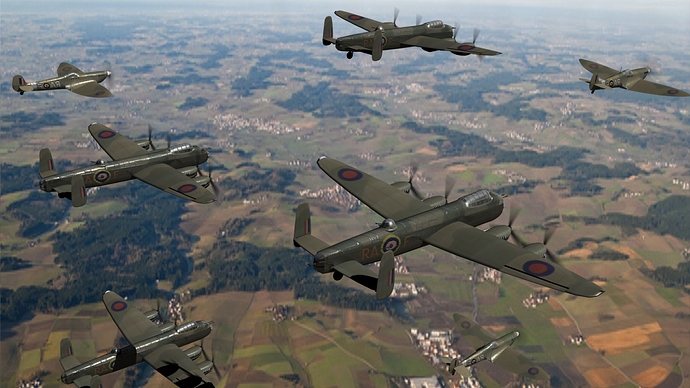 Thanks, but what exactly do you mean? better textures? models? Lighting?

The pictures of more than three airplanes are not often encountered - so this is an interesting work.
These simplified models resemble the originals, so it is quite good result, as for this forum (If you are interested how to improve your models, see www.military-meshes.com).

On the other hand, the realism of this scene is not very high. Are these airplanes flying for the Victory Parade? In the normal combat flight fighters would be grouped much more higher. And the letters on the fuselages: each airplane has “RA_F”!?
In RAF every airplane had an unique combination of three letters there. The first two letters were common to a squadron, and the last one was the individual letter assigned an airplane…

From the graphical point of view - the models do not fit into the background picture well, on the larger version of the picture. You can improve it using a higher resolution picture for the background. The shadow of one bomber, cast onto another, seems to be a little bit too sharp and too dark.

On the other hand - this scene looks quite good on the attached miniature!