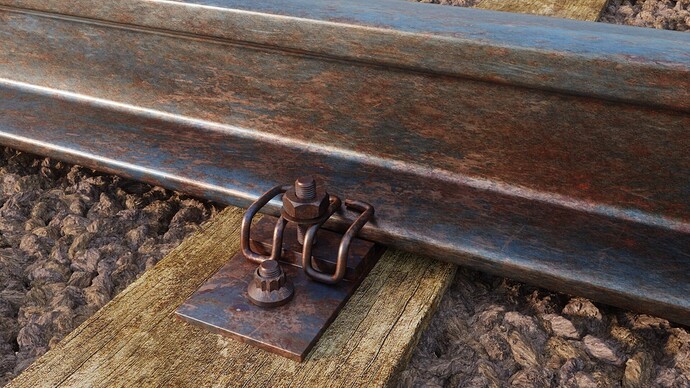 awesome! love the rust shader! but the stones could be a bit better…

Thanks. Yes I tried many shader settings and can’t get them look better. Actually is just a very detailed rock texture but when the stones are near to each other it doesnt look as good as it should.

Now for critics and tips:

That’s partially because the stones are to small. They should by roughly twice, maybe even three times the scale and should mostly be split granite or similar. If they are to small, they don’t dampen vibrations enough. If they are too smooth, they rattle to a more dense packing, and again will not dampen well enough. Also use the object-random to overlay a bit of color change with the texture. Best colors to mix with: a slightly blue-ish dark gray or a rusty brown to slightly magenta. These colors are more common to hard stone which would be used here. Don’t use yellowish brown, as ocher colored stones often are of softer types, which would wear down and “sand-up” the bed, reducing the dampening.

The second thing is the lighting: it is very even, and very low angle. A sharper light might help. Also such a low angle of light implies sunrise or sundown, so probably some yellow to reddish tint would sell the light.
The core item (the spring-suspended-fastener) looks well done.
The sides of the track would be more evenly rusted as they might even be pre-rusted to reduce corrosion. The top is probably quite shiny, if used regularily.

All in all, very nice. I really enjoy it.

I took your detailed comments into consideration and view some more photos and here is the result. 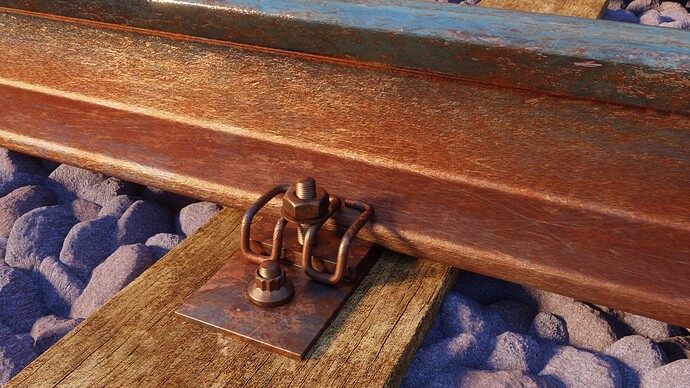 The stones would probably have sharper edges, as they would prefer to actually break granite to the requested size, but apart from that? Pretty solid.

… aaand it went to my wallpaper-switcher.

Add a Box, => Particles, volume => Make particles real, => Rigid body physics => profit?
I would need to try that myself though.

I have just made particles real and moved stones manually. Stones look good when there are gaps between them. Even the best textures will look bad on close-up if they overlap each other. They look like mball one solid blob then. Physics would be too complex for this.