Im still a novice when it comes to blender but i’ve been working on this project for a while in my free time. Im basically going for a photo realistic-ish render of minecraft.

Here’s what I used as my reference image : 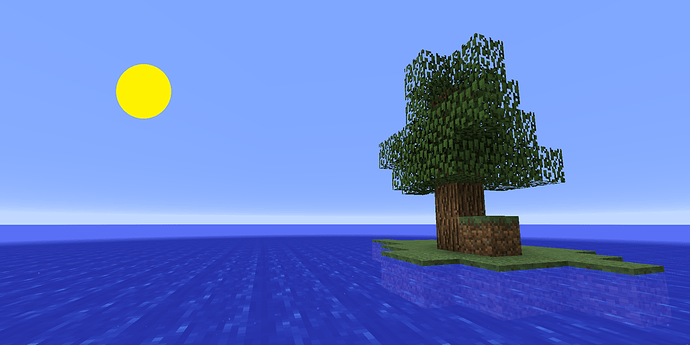 Here is the Final Render :
https://drive.google.com/open?id=0Bw3t9gNebUVAWGVFLTduUklkemM
(the image file is too big to upload directly)

I’d love to know what I can improve on it to make it look even better.

Well my, that looks incredible! Especially compared to the original Minecraft scene, dang.

As for improvements, I would have to say brightening up the scene would help, color and brightness helps things pop!

Perhaps add actual textures to the leaves, I can’t tell if they have a texture but it appears they’re simply plain colors, but they look a little out of place.

If your system can render this; Perhaps make the grass blades more thin and increase the density, how many there are.

My final pick is the sky is a bit low res compared to the rest of the image, it’s fine but it stands out to me a bit.

Other than that this is looking amazing! I hope I helped!

Thanks for the input! Ill try to improve the lighting and the grass. I think if I add some kind of displacement to the leaves, they might look better. The thing is, this scene took 16 hours to render

But i’ll see what i can do!

I suppose you used only a sun to light the scene ? Because it seems that almost no light comes from the right, which would be the reason why the shadows are so dark. If that’s the case, I suggest you use a light probe for example as background, which would light the scene from all directions in a more natural way.

Oh boy, it sounds like you’re in desperate need of a render farm. : )

Actually I used and HDRI for the lighting. My actual setup definetely isn’t optimal, but i’ll go check out that light probe thing.

To be honest, i think i went a bit overboard on the rendering. The whole scene is rendered at 1920x1080 at 1000 samples, but i scaled the resolution up 500% so zooming it would still keep the image nice. I did this since most of the details aren’t visible from far away and I would want to zoom in and see them a bit better

Yeah try putting it to 100%. 1080p is normally enough! Good work here. Try and make the side facing away from the sun a little brighter too. What HDR are you using? Doesn’t seem to spread around the back of the image.

I don’t know how realistic you want things to be, but anyway I noticed a few things:
The sun is at an angle (so I guess it’s almost sunset). I would give the lighting some more directionality and give the background some gradient. Right now I think you’re only using global illumination. Maybe add a sun lamp with a slight yellow tint?
You can do some simple compositing and give the sun some glare. I love adding glare to my renders

I got my HDRI for free on some website, but i changed the way it lit up my scene as it was far too bright if i plugged it directly into the background strength.

Here’s the way I have it set up (it’s not the actual render because i don’t currently have access to it as I am posting :P) 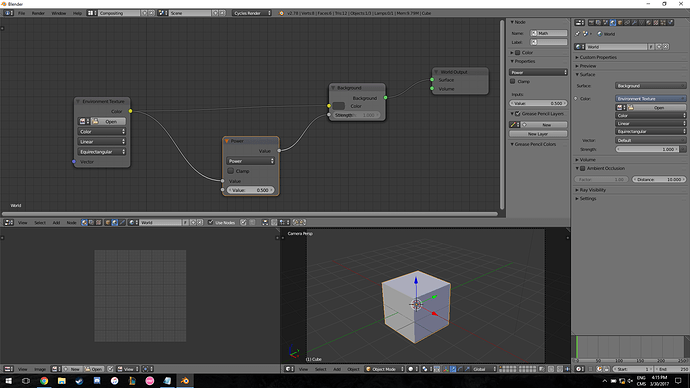 To reduce the light and make it look like a sunset or a sunrise, I put a math node set to power. I tried many different setups, but this one seemed best for the entire scene. The main issue I would run into would be the grass and the leaves just appearing plain white because of the sunlight if I increased the brightness…

If you have any ideas on how to resolve this, i’d be more than happy to hear them and try them out!

Also to make it look like a sunset or sunrise, the light coming from the sun must be orange, that way the grass will not be lit in white. So you have to use a corresponding hdri, or maybe change the colors by putting a color node (hue/saturation or maybe RGB curves) between the image and the background node.

Ok that sounds about right, i’ll give it a try and i’ll post the result here.