I’m getting close to final render time for my showreel and am facing extraordinary rendering times for some of the frames, as shown by these examples: 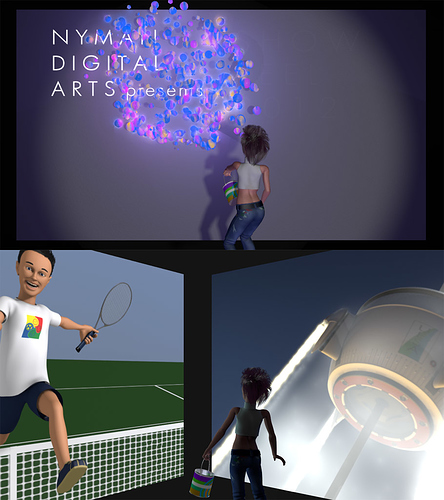 The Scene uses: AO @ 0.25, Multiply; Environmental Lighting @ .05, White, for general fill; and Indirect Lighting @ 10.0, Bounces 1, for interaction with the various screens that display my work. Gather is Approximate so the Indirect Lighting will work. Current Gather settings:

The rather high Indirect Lighting value is needed because I can’t set the Emit value of the image screens above 1.0 without sacrificing tonal range in the renderings – it blows out the highlights.

In frames where the character model is not present, the render time is often a minute or less, for some frame up to 2 minutes. With the character that jumps to as much as 25 minutes per frame.

The character is built in four sections, Head, Upper Body, Lower Body and Shoes. When Lower Body & Shoes are all that’s visible, render time is about 5 to 7 minutes, so they don’t add much. But if either the Head or the Upper Body are visible, or even the only parts visible of the character, render time jumps to 15 to 17 minutes. Not sure why these two meshes push the time up so much, it’s not the SSS, there’s no real difference if that’s disabled.

The particle hair wig does add some time – without either of them (the visible wig & the one that casts raytraced shadows), render time drops, but only by about 3-4 minutes per frame. I may need to add more visible children, though – it’s looking too thin against the bright screen.

During rendering, the vast majority of time is spent in the “Occlusion preprocessing” stage, well more than 50%. SSS & the rest of the rendering takes maybe 5 minutes.

So I’m looking for ways to chop the rendering time down – at this point any reduction would be welcome. I’ve already tried changing the Gather settings, but they really don’t affect the render time unless I set them so high they also change the visual character, which I need to preserve.

I’m also wondering why what is a pretty basic figure model is adding so much time to the processing stages. I’ve done figures with much higher polycount & Subsurf settings, and way more complex materials & textures, but they don’t render this slow, even with comparable lighting.

Do you have access to more computers? If so split the frame range between them.

I would wonder about the light that is casting the figure’s shadow. Are you using soft shadows? Maybe you could get away with only one sample there and then blur the shadow pass in the compositor?

Thanks for the suggestions, Atom. I plan to do the first, though my other two comps render at about half the speed of that I do my most work on, including these tests (Need new hardware! Got no money!). I also did some trials using the Compositor to split out various elements, and it turns out that the RT shadows from the figure contribute very little % to overall render time, and that mainly due to the hair. Plus, unfortunately, the screen they are cast on, it’s reaction to the lighting, and the title text, are all integrated into one element that can’t be blurred without affecting the overall look too much. Splitting out the shadows tends to weaken some of the critical effects (note the Indirect Lighting colorizing the cast shadow in very interesting ways). The shadows are only part of the first portion of the entire sequence, also, so after they are done I can hide the shadow-casting wig – saves about 3 minutes – and the spot casting the shadows drops to zero energy once its task is done.