This is posted on my Blog too, but I’m posting it here so people actually see it. You can read it there with better formatting. 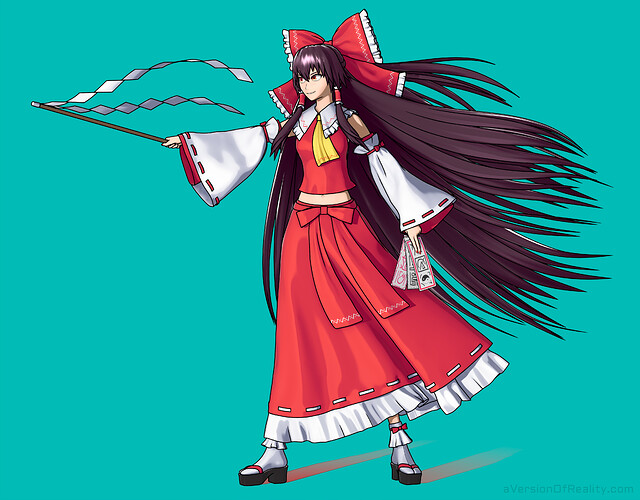 Also on ArtStation, DeviantArt, and Pixiv.

Reimu Hakurei from Touhou. This is a character workflow test using Blender 2.91 and Eevee+LANPR Lines (environment/scene coming at some point). I had a bunch of free time in the early days of the Covid-19 lockdowns in spring 2020, so I decided to improve my cloth and long hair workflows. The goal was to make a character with complex hair and cloth that was still dynamic enough to efficiently create many still shots (as opposed to being modeled/sculpted into just one pose). This turned into a long, drawn out set of experiments that included learning Python to write a custom set of Animation Nodes for generating rigs, and then deciding I didn’t really need them.

This project primarily focused on the technical process, not the final artistic results (yet). I still need a lot of practice in that area.

Here’s a video overview of the project. This post will be a text summary and image dump, and also cover some things that I left out to prevent the video from being even longer. The images in this post are from varying points in development. They were made and posted on Twitter and Facebook as I went. Give me a follow if you want to see what’s happening with my current projects. Early test of the script generating the bangs rig. 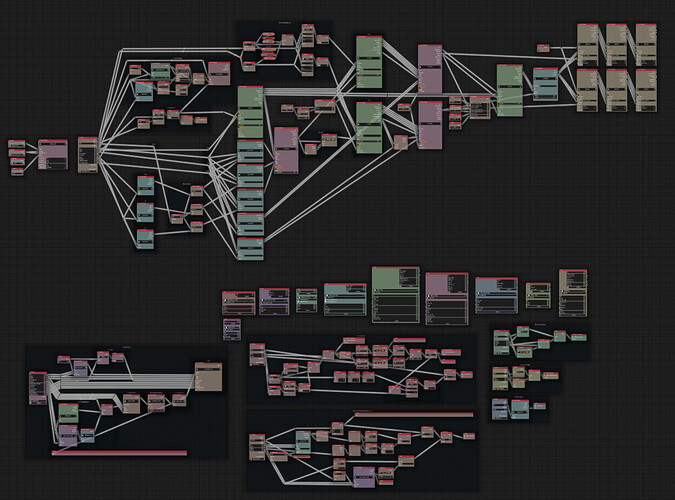 1000×740 178 KB
The rigging nodes. The lower half is the program, the upper half is the graph that generates the bangs rig. There’s also like 10 python script files. Good concept, but I wrote this while learning Python, so its horribly inefficient and unreliable. Hopefully can make something better now, and with the help of the new Geometry Nodes. Iris and Pupil rigging. The Empty objects that control the textures are constrained to the bones.

Lots of flexibility. Need to rig the eyelash spikes though.

Toggling the Cloth’s extra shading layer on and off.

Baked Bevel normal map fixing bad edges and blending it all together. Also helps reduce the impact of intersections.

Overall, I’m pretty happy with most of this workflow. If I wanted to make lots of art and different poses with it, it would work and not be too annoying. But since finishing this project in Summer 2020, there’s been a ton of new tools released. We’ve now got the BEER/Malt render engine, and blender 2.92 is about to come out with its new Geometry Nodes system, Eevee AOVs, and more. I barely got to work on 3D for the rest of 2020, but despite that I’ve already made improvements on lots of things here. This is all going to get higher quality, more efficient, and more user friendly!

I’m also happy to announce that I have finally setup a Patreon, and will be on a monthly release schedule for videos. If I can get even a little bit of support, I can spend a lot more time creating tutorials and helping people with their projects. Also please follow along on Twitter for regular experiments and project WIPs, and subscribe on YouTube!

Other Work In Progress stuff and Misc Images: 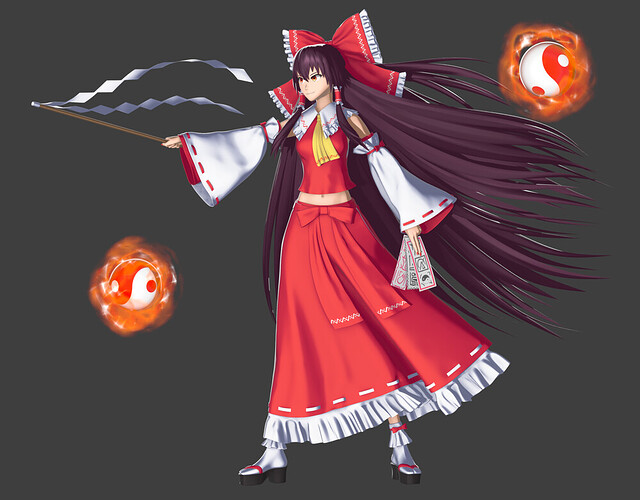 1000×781 135 KB
I thought about including her flaming spheres, but couldn’t get an effect that fit in. Maybe I’ll come back to these for a Scene. 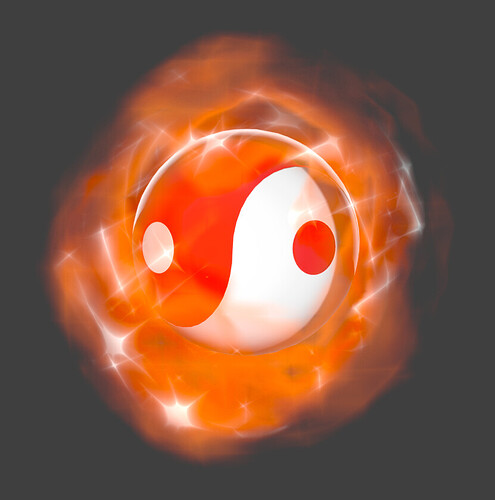 831×839 79.6 KB
The effect is made with Procedural Textures on multiple spherical shells with some displacement. Not true volumetrics. 1000×526 83.1 KB
I figured out a setup to render out Custom Passes using the new dependency graph drivers. These can then be re-combined in a new file or paint program for post work. However, Eevee is getting AOVs now, so this driver method probably won’t be needed soon. We’ll see. (Don’t mind some of the thumbnails not displaying right.)

Constraint Nodes demonstration. The values in the bone constraints are being overridden whenever the nodes are executed, and they execute whenever a property is changed.

Script to copy weights from mesh to lattice. Save as .py.

Dude this is awesome! You practically made a freaking tutorial for it. Looks Great!

This is good stuff! Very informative and will help a lot of people.

Thanks! That already makes my weekend better

Whoops, I forgot to add the link! That’s insane ! Thanks a lot @Ascalon for sharing your experiments, it’s really interesting !