What are render passes?
Render passes are a great trick in game engines. They allow you to outline objects:

And do many weirder and more wonderful things.

Basically a render pass is a rendering where you render only a subset of the scene. It may be only specific objects (as in the example above - the outline pass is a render showing just the chair), or it may be a specific attribute (eg all objects specular)

What this tutorial is not:
This tutorial is not a collection of sample code. If I get around to it, I’ll provide some, but for now it is just a knowledge dump.
So how do we do it:
Pretty much this all stems from the fact that the RenderToTexture update happens when you call source.refresh(True). So you can twiddle object parameters all you like before then. Then you can combine render passes in the node editor as the passes are just textures, and put a plane in front of the camera to display it.

One comment before we get into some examples: if you’re going to be displaying render passes directly on the scene (as in the first image), you’ll have to have two camera’s in the same location: bge.texture.ImageRender does not allow the active camera as a source, but it does allow one in the exact same location.

The most basic is to simply render only some objects. In the case of the outline effect above

Now we’ve set every object but one to be invisible for the render pass, and then set them all back the way they were.

How about, say, a specular pass?
What happens if we have this node setup:

(note that the material that’s currently black has Object Colour enabled and is shadeless).
So now we can, by twiddling the object colour we can get the material to be specular only. Aint that grand? With a bit of twiddling, I think you should be able to get a normal pass as well.

How about passing arbitary data into a render pass? So instead of a pass of specularity you want, say, a pass of object density, or mass, or some other non-material parameters? In one case I worked on a render pass needing lots of data (potentially tens of parameters) about thousands of objects. This was achieved by:

Conclusions:
You can do a lot of stuff by rendering non-materials using the render to texture functionality - but beware, ever render pass costs quite a lot of processor time.

Things you can do with render passes: 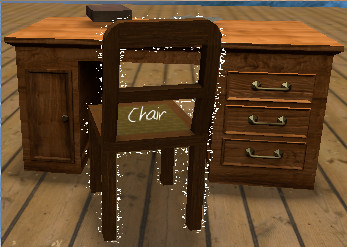 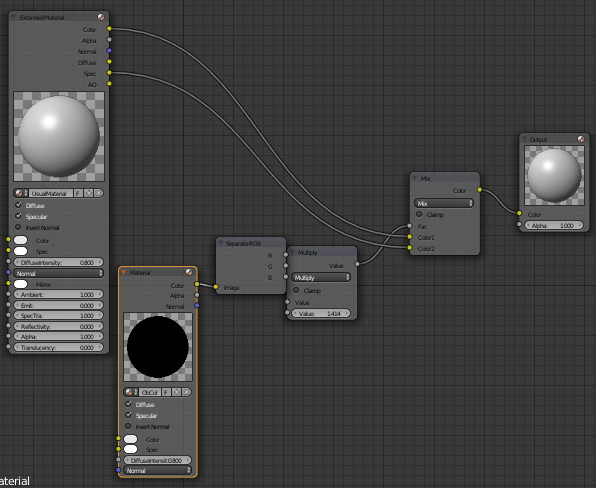 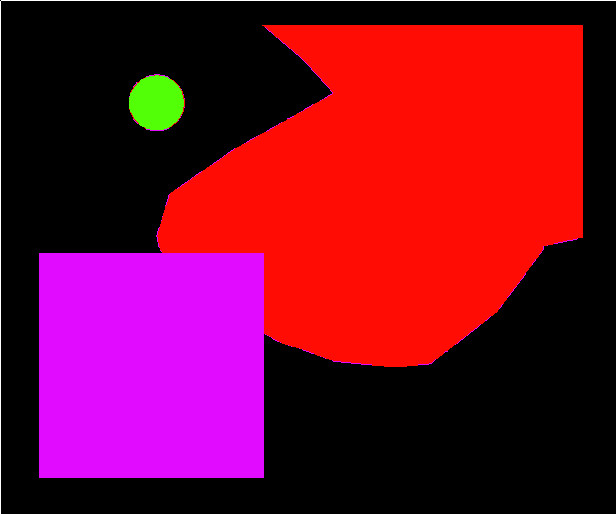 Nice explanation of how to use render passes. Very useful technique.

can you do that outline effect but have the border animated ?
(like pulsing energy?)

can you only bloom the highlight surrounding the object?

Yes both of those are possible. Have I don’t them? Nope - that’s up to you!

so here is a file ive had for a while, just waiting to put it in my mario game. I learned how to do this with martinish’s files. He is a genius. I saw this post and had to share. so here u guys go.

notice the blue cube’s straignt edge. I made a dynamic clip plane, using a plane equation. in one scene i did the 2 cam render setup, and had to do the same for the skybox. so in the first pass i do the clip plane, and when i do the second pass i turn off clipping and render out the scene and slap it on the plane. Its set to halo so it faces u at all times. then i call screen space in the frag shader and do some cool distortion that follows it position in screenspace. without that technique the distortion stays a center of screen, which we dont want bacause i spills off the plane. 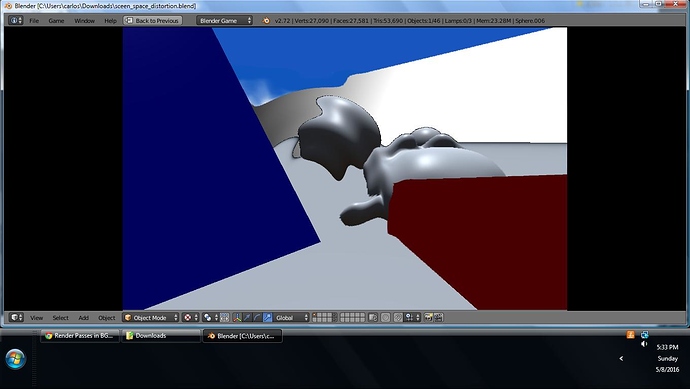 I guess this could not be used to render a butch invisible cubes could it?

What exactly is RenderToTexture in the code you posted? Is that a class that’s been instantiated? If so, which one?

Is it at all possible to generate an alpha map of an object without using “obj.visible”?
Here’s an example of something I’m trying to achieve

This is the normal render that you’d see in-game: 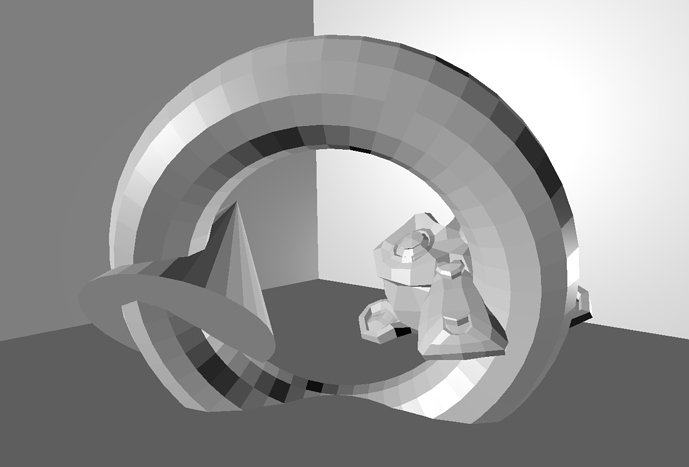 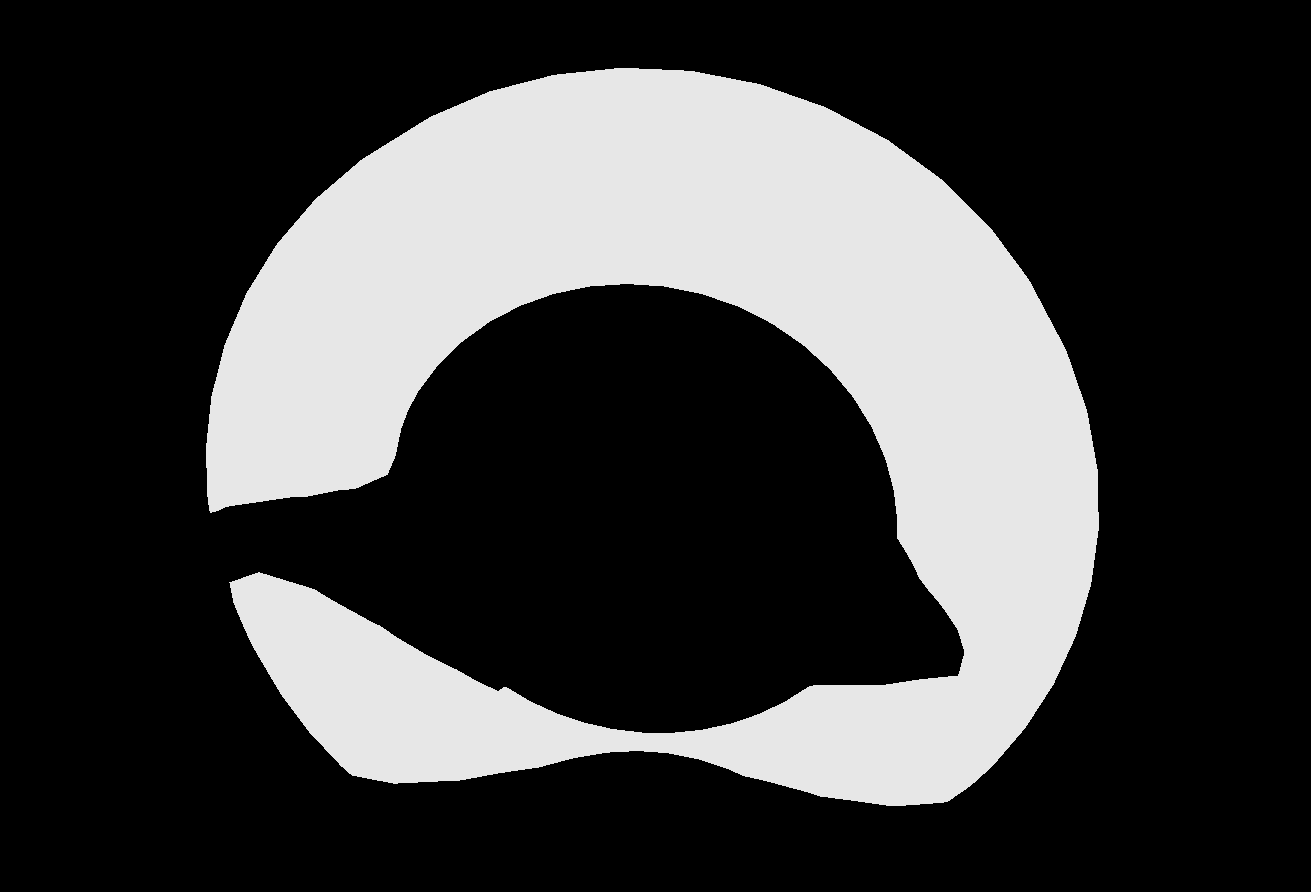 You obviously can’t manually change every object material in between source.update(True), so how would I do this?