After some playing around I was able to render Mike Pan’s BMW1 benchmark under 10 seconds. I was not recording the rendering process, because it slows down the system, while grabbing the screen.

Here is a proof: 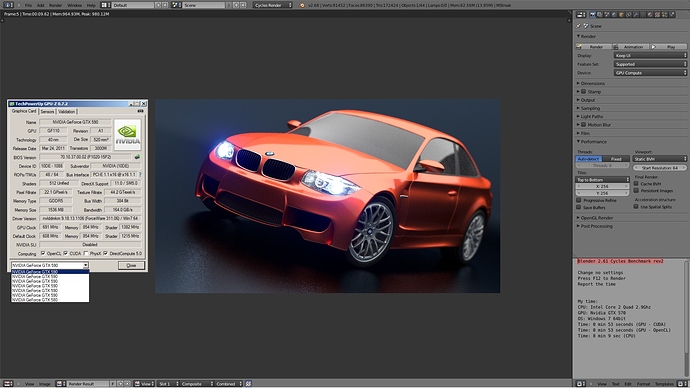 and a little how to

all the new benchmarks will be posted here, in a day or two.

Short answer: use 7 GPUs. Nothing to see here, folks…

Short answer: use 7 GPUs. Nothing to see here, folks…

Hi, you probably missed, what influences the scene render time - the tiles order, dynamic/static BVH, and hiding the render update … and a little overclocking.

I would say that technically you’re not rendering the benchmark in under 10s, you’re rendering a tweaked version of it.

The whole point of benchmarks is consistency, and when you twiddle the settings, all relative timing goes out the window. Many people would also report much smaller benchmark times if they were allowed to violate the “Change no settings” part of the benchmark.

Having said that, all those cards don’t seem to scale terribly well in any case, possibly due to the initial overhead and small scene, 'cause my single (overclocked) GTX 580 got these times:

That’s with the browser running and Steam installing games in the background. At least for me, the other changes you made don’t make any difference whatsoever once I’ve already changed the tile size. That’s on a GTX 580 Lightning, running at 900MHz with 2500MHz memory.

So, my renders took 3.3x longer than yours, but you have 7x the GPUs installed. I think that the small scene may be affecting things and that for more complex / higher resolution renders you may notice better scaling, though, due to the initial overhead being amortized over a greater amount of time.

To be clear, this isn’t to say that I’m not jealous. I’d love to have a few more GPUs for rendering.

Yeh, while it’s good for you all I see is epeen…
“Look at how amazing my computer is”

And I wouldn’t bother posting your results in the thread, like pointed out it’s not the idea of the benchmark to be the fastest, but to deliver the results with the given settings so people can compare.