I’m not exactly sure where to post this as the problem is very specific to certain things.

I’m sure everyone is familiar with the game Minecraft and how you can import Minecraft worlds into blender (for use with “Machinimas” and things that cannot be achieved in the actual game). However, most importing tools cannot import “special” blocks such as torches and fences, so, they are replaced with flat planes or some other representation of the object. You will need to replace these objects somehow. Placing them by hand is a terrible way of solving the issue when you have a big area. So how can you replace them automatically? This also goes for things like replacing the leaves on trees and such.

I’ve included a picture this time 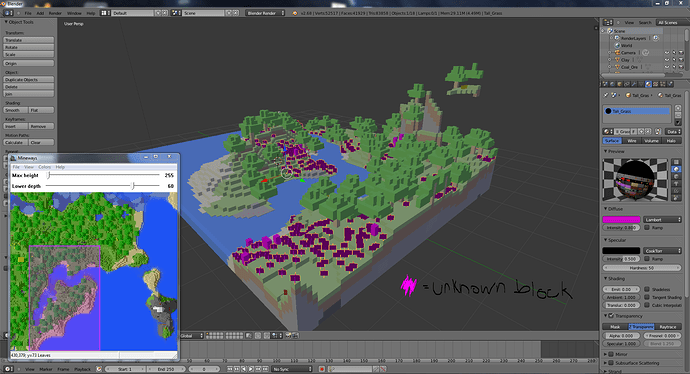 Select the object you want to replace, go to the select menu to select all with the same material, in the object menu, select make linked > mesh data.

Now whenever you edit one of the objects, all of them will be edited.

Well, if you look in the picture, you can see that all of the unknown blocks are selected as one object. I would assume this method would show one, big monkey head, for example?

If each part of the object is a continuous piece, you can go into edit mode and press P to separate each object by loose parts, then you would follow what I said above and start editing one of the objects to change all of them (though maybe it doesn’t matter here if each plane is a separate object).

I will try that soon!