I just started using Blender for the very first time yesterday and started my first little project. Making a football.

But I seemed to have screwed up the workspace. When ever I open the saved file I get the mess below. I can on longer work on my project because I simply can not even see it! :eek: It’s somehow over to the right where the tools used to be and the work space is covered with what looks like ha;f a dozen other work spaces.

I tried loading the factory settings option but that only loads a brand new file/project. I can not get my project file back to normal. Is there a load default workspace option some where? 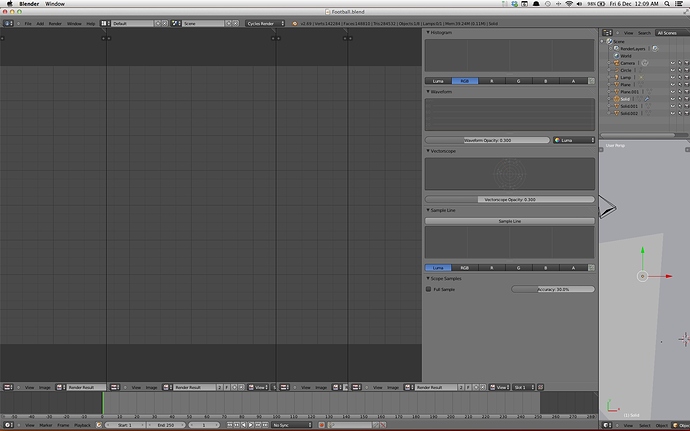 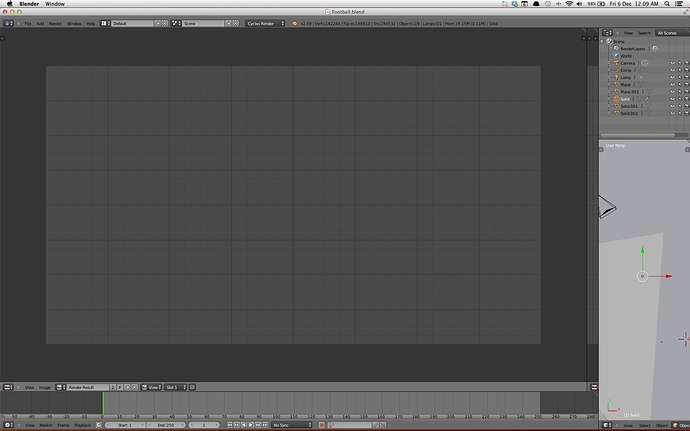 In the bottom left corner of each pane you can change its type. The main panel in your screenshot is a UV/Image Editor. Just change that back to a 3D View. The two panels on the left you can either change back to an Outliner and Properties pane or just join them (RMB on window border and select Join).
http://wiki.blender.org/index.php/Doc:2.6/Manual/Interface/Window_types
http://wiki.blender.org/index.php/Doc:2.6/Manual/Interface/Window_system/Arranging_frames

You really should have a basic understanding of the very fundamentals, including the blender interface, before strating any modelling work. I suggest at the very least you read the manual for the interface and navigation and search for relevant tutorials (youtube etc)

Also, assuming you didn’t mess up the start file, you can restart Blender or use [CTRL N] to reset it and then reload your blend file without the UI changes you made. Look in the bottom left of the file selector, there’s a checkbox to reload or not the UI saved in the file.

And if you messed up the start file, there are always the “Factory Settings” from the File menu.

There are a number of preset workspaces you can flip between, either with ctrl+left and ctrl+right, or from the ui up the top of the screen. However in your case you have made a mess of the ‘Default’ layout-- as you can see from the top of your screenshots where it says ‘Default’, next to where it says ‘Scene’ (near the menus such as ‘File’, etc).

In this case you’ll probably just have to readjust the workspace as Richard Marklew suggested, which is a good thing anyway since you’ll get to learn a bit more about blender.

Thanks folks for all your replies and useful suggestions. I managed to work it out myself after a little while.

Richard said: “You really should have a basic understanding of the very fundamentals, including the blender interface, before starting any modelling work.”

Valid point but I like to just get stuck in to new software. Seems to work for me. I manage to knock this football out in short while.

Great application and a pleasure to use. 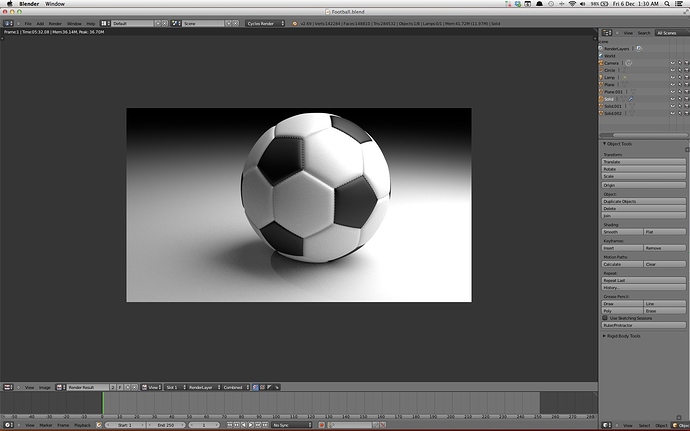