I have a charector with a long coat. I have modefied a free downloaded charactor to have partical hair/beard and now a long coat I want the coat to interact with the rest of the fella but hair goes through it and so do his legs when animated. What do I do? weight paint the coat and rig it or cloth simulate?

Also something odd goes on with the bottom of the coat which blender doesn’t like me adding loop cuts to fix I’m asuming that it’s subsurf related… The coat is part of the mesh of the charactor jacket duplicated rescaled and adjusted etc. Any Ideas 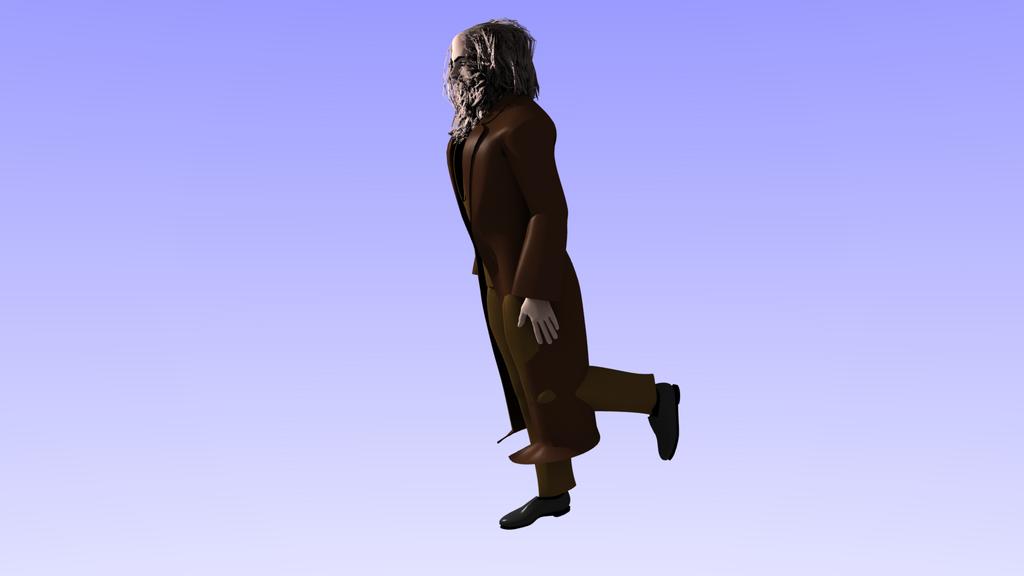 Ok so weight painting seams to be fixing it except a few stubborn vertices which I cant seam to separate from the wrong bones… is there a way to select a specific vertices and assign a weight? btw I have fond the face selection for painting button (on the tool bar next to layers on the weight painting view) invaluable in this task so far!

One thing that can help greatly is if you enter Edit Mode and in the Vertex panel you can select by vertex group so see where they are. You can select vertexes and add or subtract them from the group. The value slider determines what amount of weight it will get when you click Assign.

That being said, a better set up for the coat would be to use the cloth modifier but pin the top part of the coat and leave the bottom part for collision. The coat should be separated from the body.

Add the same Armature modifier to the coat as the body. You can make a duplicate of the armature and then simply parent the coat to it for simplicity and choose the Automatic Weights option. (this will paint weights and create the vertex groups) But come to think of it the coat will already have them since it was once a part of the body. So use this on the legs idea - below.

After this you can delete the dup armature and instead use the original armature’s name in the Object pop up list of the Armature modifier.

Create a pinning vertex group for the coat. The pinned group (Waist up) would follow the body. The unpinned area - below the waist will get cloth dynamics.

For the simulation make two simplified leg tubes in the same place as the legs with segments so they can bend at the knees. Again add an armature to this object and have it driven by the same Armature object. (using the same vertex groups the way I mentioned with the coat)

Remove the body object from that layer but keep the leg tubes in the same later as the coat.

Make the leg tube object a collision object and and coat a cloth. Set the coat Cloth Modifier to use the vertex group you assigned to the coat as the Pinned ( the upper half).

Run the simulation on the coat and the leg tubes then Bake it. Put the legs in another layer and make the body visible along with the coat for rendering.

This is exactly what im looking for and i wonder if u(Cookingglen) found a way to rig it? i wanted it to have natural moves as the character walks or run…by vertex group i d say its impossible i cant rig it and tried it in many ways with no coins…can anyone suggest me an easier or better way of doing it?
btw i can send the file for better analysis…

For a workable cloth set up see my post above.

hi Richard thanks again for hooking me up ,i tried the bones but still went wrong but i think i made it a little different from what u just said but i prefer usin g cloth fx which looks much more natural than the deformation,i just have a question,does the cothfx work in the game engine?
thanks in advance for any help

this is what im looking for :

ok heres the file im trying to rig:
http://www.megaupload.com/?d=VW8NZ9WO
i hope this helps with any idea for the cloth fx
thanks in advance,
Romy

Took a look at the file and I think you need to add ‘fan’ bones, additional bones to control the mesh that move as the main rig bones move. As an example, I’ve added one bone to your rig to control the coat on the left side of the character, weight painted it, and put a copy rot constraint on it. The constraint isn’t really needed if the bone is parented to the thigh bone. I admit I did a sloppy weight painting job on the new bone I added, but it solves the leg mesh passing thru the coat at frames 1-4. Take a look at this file…
http://www.4shared.com/file/etsGgDLh/CharacterNew8.html

Don’t know anything about the GE. Cloth will always look more natural.

But if you do it with bones - based on Randy’s set up or something similar - you can get fluid motion with keyframes by using arcs and offsetting the rotations up and down the bone chain. In other words you don’t just keyframe all of the bones at the same time. You start from the top of the chain and offset the keyframes so the motion seems to flow from the top down. You can even have a specific rig for secondary motion like this. Real tedious for a coat that wraps around like that however.

Cloth is the best idea - if it is supported in the GE. If it is, I’m sure you’d have to bake it.

Hi Richard,
yeah i think it is supported but it must have some trick in order to make it workable for GE…im gonna try to look for some tutorial at youtube…here it is an example of cloth simulation in ge but i tried to apply that to my character s coat and didnt move anything however when i tried the plane simulation it worked perfectly…video here : http://www.youtube.com/watch?v=Cs7ZEaIj-t8
if u find any way to rig that as a cloth simulation can u lemme know bout it?
i m currently using bones deformation ,it worked but it looks pretty crappy tho not realistic at all =/
anyways ill keep waiting for the best solution!
thanks for ur efforts so far dude i really appreciate it!
Kind regards,
Romy

PS: ill post today or maybe tomorow a video of the final result of the deformation at utube

Well it looks like the GE uses the bullet physics to do that - I am guessing. It is not the cloth modifier. I don’t know anything about the GE so I can’t help you there. I know how to rig it to work in Blender for animation and I can help you with that but sorry that I am useless for the GE.

Ok Richard thanks for ur attempts to help me out i really appreciated it! ima look for that topic in utube and see what i can get from it!
thanks brother!
All the best,
Romy