Rigging not working as expected?

Hello! I’m a blender begginer and for practise on rigging I decided to use .obj without skeletons that I found on the internet. I have an issue with the armature, as when I parent it with the model of the character itself, it doesn’t work as expected and doesn’t rotate or move the model, only skeleton.

These are some screenshots (at the end there’s also my .blend file in case someone wants to take a look at it): “Scene” and parents (“lizardo” is just what the model is called): 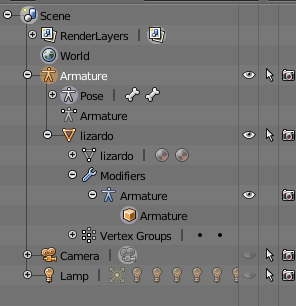 Okay, here’s exactly what I do to set the parents:

I believe there might be a problem in which is the “parent”. Maybe the character (“lizardo”) has to be “armatures” parent? Right now it’s the opposite, but when I try to select the character first, then armature, pressing Ctrl+P doesn’t bring up the same menu, and is more limited: Bonus Question: What software should I use to make the movie itself? I believe Blender supports this, but maybe there is a simpler software to import my models and skeletons and start animating there?

You have some non-manifold vertices. edit the mesh – first remove dobles. Then spacebar–>>select non-manifold, smooth the vertices. Then you should be able to auto-weight.

For a begginer, I have no idea what you’re talking about, but I’m watching some videos to figure it out! Thanks

You have it backwards. Select the character mesh, then shift-select a bone in the armature and hit Ctrl-P. Child first, then parent.

Hey K Horseman! Thanks for replying! I’m still figuring all out, but it seems that the main problem was not having the meshes joined and not having removed doubles! I’m rigging the tail as I write this, and Ive been able to move it!

Bonus Question: What software should I use to make the movie itself? I believe Blender supports this, but maybe there is a simpler software to import my models and skeletons and start animating there?

Blender has awesome animation tools. Personally, I would stick with blender for the whole process. Be warned that no software will be easy for a beginner. You might as well learn this one. The price is right!