the pants move with the back bones. they should not. etc etc
i tried clicking the remove button on the left for all that that button does.
and yes the weight painting did not even begin to work- no colour etc.

how do i assign the right weight levels like 1 to the right bits etc.
keep the explanations simple!

the end result will NOT be animated- just posed.
thanks

yes i tried the ALT p thing - no help 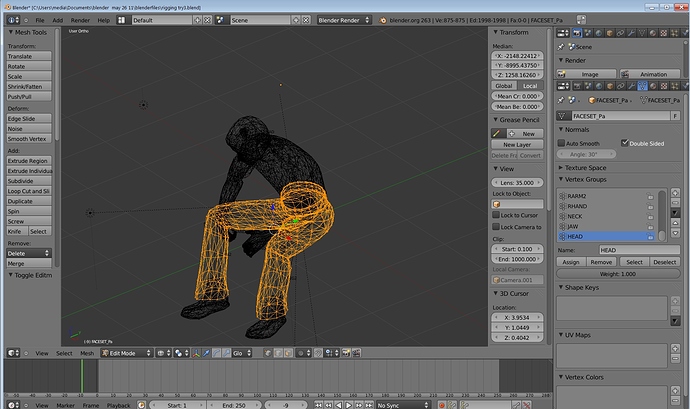 Your character is a mess. Insane scales and rotations everywhere, origins all over the place.

[CTRL A] Apply --> Rotation and Scale

Also, remove the Armature modifier for each mesh and delete all the vertex groups.

Your meshes are a mess. No faces. (And triangles aren’t recommended for animations… And in general. Blender prefers quads anyway.)

[CTRL N] to recalculate the normals. (Expect some manual work on the arms. It’s a total mess.)

Back to Object mode. Select all your meshes and set the shading to Smooth from the Tools panel. This makes it easy to find the inverted normals.

Use [W] --> Flip Normals in Edit mode for the last fixes. You’ll have to select the problematic faces one by one. (No quad, no edge loops, no help.)

And it might not be a bad idea to separate the feet. 2 feet, one shoe… Problem!

The armature is a mess. No root bone. Some disconnected bones floating in space… (LARM2 and JAW.)

Select all the bones in Pose mode. [ALT G], [ALT R], [ALT S] to reset the armature to its rest post.

To create the missing root, Set the 3D cursor to the origin of the mesh. [SHIFT S] in Object mode then [SHIFT A] in Edit mode. Move the newly created bone down to the feet or backward. Not sideways! (We just need to put it out of the way.) Let’s rename it “Root”.

Then parent BACK2, LBONE and RBONE to “Root”. (Keep Offset.) Deactivate the deformation for “Root”.

Fix a bit the bones which aren’t inside the mesh… And the left arm bone which should be named “LARM1” IMHO.

Once the armature is fixed, we can finally think about using it.

First thing, unparent the meshes (and the lamps) which are parented to the armature. Use the Outliner. Expand the Armature line and select its children. [ALT P] --> Clear Parent (over the viewport).

Select a mesh and then the Armature. [CTRL P] Set Parent To --> With Automatic Weights.

Rinse and repeat for all the meshes.

This will create all the vertex group and assign some (not too bad) weights.

Edit all the meshes one by one and delete the useless vertex groups. Like, for example, the feet don’t need to know what the head bone does. This is especially necessary for the arms and legs which are a bit tangled.

Now, you can think about weight painting.

Just don’t have too high hopes. You will certainly be able to alter a bit the pose to make your character ride a bike or drive a car… but to make him stand or walk is out of reach of any fixing. Look around and you’ll see that all the characters are usually modeled in a T-pose… for a good reason.

Once you’ll have finished playing with your character. Delete him and restart from scratch with quads… or else, with a bit of patience, you can join all the triangles 2 by 2. :eyebrowlift:

The blend file with the result of my work: rigging try4.blend (1.51 MB)

I showed you mine, now show me yours.

WOW thanks for your help.
i would not know how to make a model so i got this online.
thanks

does anyone know what happned to the figure? the guy in the middle should look like the one left of it.
i appended it from the working file #4 above.
thanks 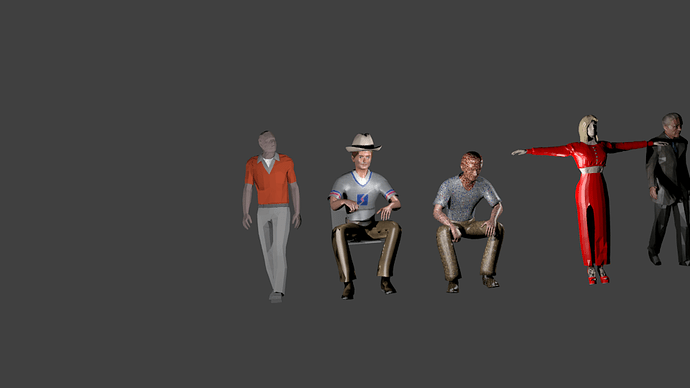 same thing happens when i copy paste into the same file!

You’ll have to be more specific. I didn’t do anything besides fixing the meshes and the armature. I didn’t change the pose or the textures, so… What’s wrong?

The shading maybe? I didn’t switch the meshes back to flat shading, that’s really all that is different.

well even if i copy paste it to the same file there is the problem.
i use 2.63 cos the text books are for that one.
thanks

I suppose there is a problem of compatibility in between my very brand new Blender 2.69+ and the antiquated version 2.63.

Here is a new version of the blend file saved with the “Legacy Mesh Format” activated: rigging try4-legacy.blend (1.32 MB)

IIRC, even Blender 2.49 should be able to open it.

hello again
what have i done dumb? there is no color!
pretty please could you please work your magic on 1 last file?
split in 2 to make it small enough.
thanks amillion 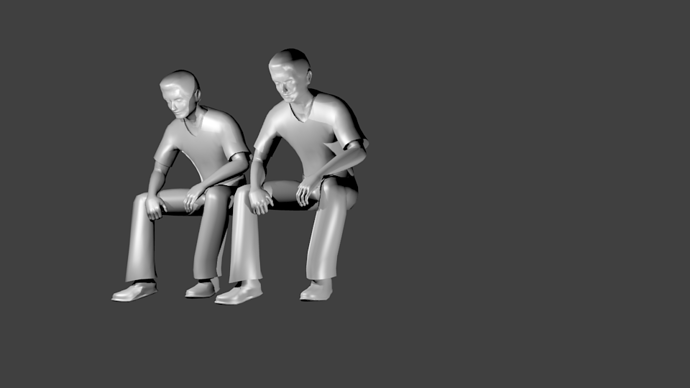 including your armature.
thanks

My knowledge of Blender Internal materials is close from zero… However, if I understand correctly what I see, the materials on the guy are supposed to use textures. Reload them from the UV/Image Editor. (I don’t know why Blender lost track of them.)

For the woman, you shouldn’t have to cut her into pieces if you enable the compression. Use “Save as…” and activate it in the bottom left corner of the file selector. Besides, blend files are limited to 10 MB on BA, IIRC.

To be on the safe side, just upload to http://www.pasteall.org/blend/ and copy/paste the link into your post. Their limit is at 30 MB.

BTW, you misplaced her torso…

Still, it doesn’t change the fact that helping people like me are supposed to help, to fix things, not to work for you. You will never learn if you don’t try to do things. Drop the book, update Blender and look at your screen!

And I still think that those triangulated meshes are pure crap… Like all the 3DS files I’ve seen so far.