Hi. I’m animating a scene for a friend that will eventualy become a flash banner. The scene consists of a floor (2 planes, both transparent, one rendering shadows the other reflections) a stack of cubes and a logo consisting of a sphere and 2 text objects (converted to mesh). I want the logo to fall into the scene land next to the cubes, bounce a little then settle.
I have read several threads about using the game engine and recording the IPO curves, so I tried it out, but I’m having problems. I set up one of my floor planes as a static actor and for my logo I added a cuboid surrounding the sphere and text meshes, parented them to it and activated it as a dynamic actor (I did this because I want to apply a local rotation to the sphere for the duration of the animation at a later date but want all three to bounce as one, so I can’t join the objects and activate them as a single actor). I also tilted the logo a little because I want to achieve a slightly irregular bounce.
When I run the game engine the cube and parented objects fall down as expected but stop about 8 to 10 blender units above the surface of my plane (and out of camera shot), and the cuboid bounces a little but retains the same angle I gave it initially (ie; it doesn’t react as if it has hit a flat plane on one edge). I’ve not touched any other settings relating to the game physics as I know little about it. Does anybody have any idea what I am doing wrong? Any help, suggestions or reccomended tutorials would be appreciated, just so you know, I tried to post the .blend file but the upload kept failing for some reason, so I’ll try adding it later.

and before you ask I’ve sized the radius of my dynamic actor to conform with the edges of my cuboid.

Here is a basic screen shot to show where the object (cuboid with a bit of sphere sticking out) lands in relation tho the plane. 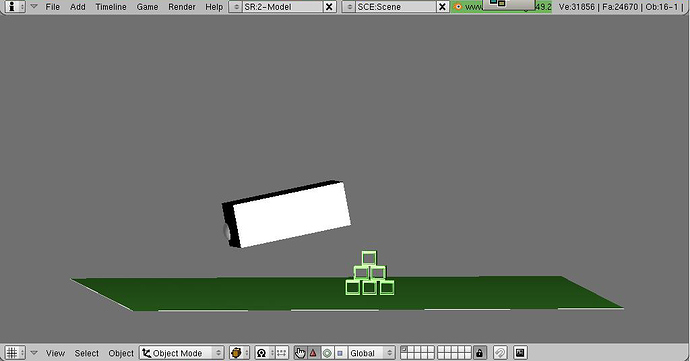 change the bounds from box to convex hull