I created this render a while back to challenge my modeling and texturing skills.
the chair is not an object of my phantasy nut a real object that you can have made. It’s as expensive as it looks as these are hand made objects:

Modeled and textured in Blender (obviously) and rendered in Indigo Renderer

Overall I am happy with it. I actually got in contact with the Artist to see what he had to say. He was very complimentary but pointed out the texturing in one area was not exactly what one would see. I had the same concern 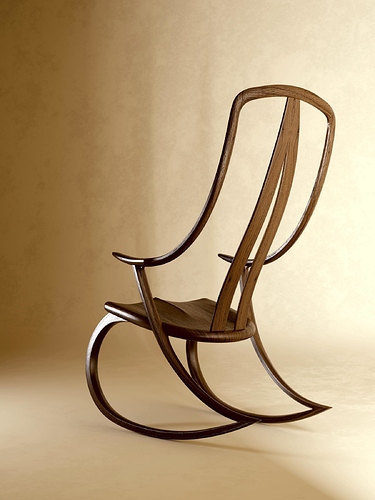 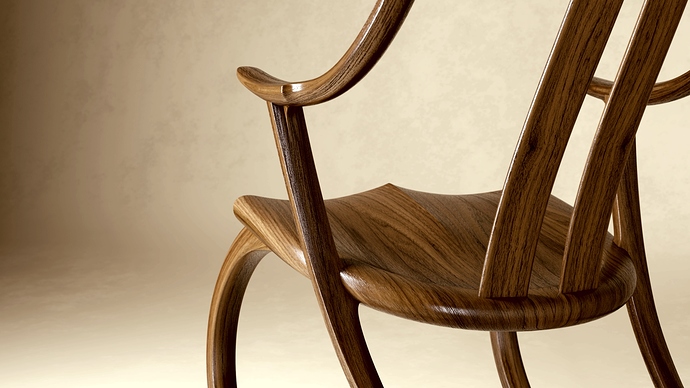 Hi, it looks pretty realistic, the modelling is excellent, I also like the bump-mapping of the textures.
I have to say, though, the textures are too symmetric on the left and right side of the chair. This is especially visible on the two vertical slats supporting the back. The texture seems perfectly mirrored across them, making them essentially exactly the same. This is not realistic.

Beautiful render, the warm light gives it a calming mood.

Thanks for the positive comments.
Some of the textures may look symmetric but aren’t. But then some are symmetric and that was done intentionally. I have a subscription to the Fine Woodworking magazine from Taounton press for many years and have a few projects under my belt but nothing as ambitious as that chair. This chair was features a couple of year back (or so) on the back of the magazine under the label “Pro Portfolio”.
David Haig offers a DVD with a video documentary of how this chair is made and I ordered it. As I said, when I was done with the rendering I contacted him and we has a little email exchange.

The symmetry on the back slats and the seat is intentional as it is a reflection of how these are made. It is actually a very common woodworking technique called book matching http://en.wikipedia.org/wiki/Bookmatched.

What is not so realistic and what I was fully aware would be a challenge is the end grain on the seating surface. Having made a couple of hundred of these David knows by obviously exactly how that looks like ad stated:
" I’m referring to the back edge of the seat, where you have the line of the grain kind of wrapping around and over the back edge at a continuous slant. It has more of the look of wood-grained veneer wrapping itself around the form instead of being worked in solid wood. I’m sure you are well aware of what I’m talking about, as you have dealt with it very carefully in the grain patterns on the ends of the coffee table legs, but there the transitions are abrupt enough for it to be fairly obvious. It’s less so on the back seat of the rocker."

Nice work. I definitely noted the back of the seat bottom as well, definitely work on that if you want to push it into perfection. Like your lighting/studio background.

Are the bands in the background desired or is it just my monitor?

all i can say is: that chair is awesomely designed!

looks great! how long does it take to render? cycles of bi? Are you using a standard 3 light set up or more?