Nobody seems to really respond to these types of questions. I was wondering the exact same thing. I posted a forum about it a few months ago and nobody has given me anything. As far as I know, you need some type of Addon to make the simulation do what you want it to. Sorry…

You can make a physics based rope with Rigid Body Joint constraints.

That’s overly complicated. Just run a cloth sim on a single string of verts, add a hook to each vert, and have the hooks drive a curve. Instant rope rig.

I was wondering about this too and nearly made a new thread. I’m familiar with ridgid body joints and physics… but not how to tie a weight at the end of a rope, let it fall, and watch it sway while the rope coils and tenses accordingly.

Only way I can imagine (based on m9105826’s comment) is using cloth physics. Make your rope a cylinder (with enough cuts and divisions length-wise), attach a weight at the bottom, and pin it at the top. Not sure how well it will work, but it might just do the trick.

Using a “ridgid body joint” constraint could work too. But I don’t see how you’d draw the rope itself and apply its own physical influences. Perhaps someone can test and let us know what their result is… I’m on a pretty weak laptop to do much in Blender currently.

Cloth physics don’t interact with rigid body physics. The weight will fall and the rope will act accordingly but the rope won’t have any spring to keep the weight from falling into infinity. That’s another limitation of Blender currently. I have also tried to make a rope in blender using the cloth simulator. I don’t know why but the cloth simulator really doesn’t work well with thick, enclosed meshes. It’s either that or I’m just not doing it properly.

@ @Thecoolman5: That sounds like cloth physics might not work well for ropes. Not sure if another way would be possible currently either. Would be weird if this is a gap Blender didn’t cover yet and no workaround exists.

Don’t use the cloth sim on the rope itself, or it will try to collapse like an empty shell. Run a sim on a string of single verts and use that to drive a curve hooked up to an array which creates the actual shape of the rope.

As far as interacting with rigid bodies, it will interact just fine with anything that has collision turned on as far as I know. Make sure everything is in the right place in the modifier stack.

I know about the string of verts, but how do you make a curve hook up to an array and form a rope?

I am making a noodle physic simulation…

“Noodle physics” would require simulating the composition of the noodle in order to get the correct physics, which is a pretty specialized situation. Is there any particular reason why a physics simulation is needed? Are you just looking for a shortcut to avoid actually doing the animation traditionally? I can pretty much guarantee that screwing around with using physics sims is not a shortcut, especially since you’ll have to adapt an existing sim (Cloth seems the most promising, per m915826’s suggestion) to your noodle problem.

Can you be more specific about the motion you want for your noodle (or noodles)? It may be that a sim is overkill.

I want Andrew Price to go over this seemingly impossible topic.

Nothing impossible about it at all. Sims are only one solution to animation problems, and not always the best solution. But a better suggestion of how to go about it would result if more detail was given about the planned animation – “noodle physics” is really open to a very wide interpretation.

Lets say you take a cooked spaghetti noodle and drop it from 3 feet onto a ceramic plate. How would we replicate that in Blender?

Parent a series of empties to the vertices of a cloth-simmed 1d string. Then create a small cross section of rope and give it an array modifier and a curve modifier. When you create the curve, give it a hook modifier and use the empties as the hooks. Then when you run the cloth sim on the vertex string, it will look like it’s running on the rope itself. I’ll make an example file to play with later today.

Lets say you take a cooked spaghetti noodle and drop it from 3 feet onto a ceramic plate. How would we replicate that in Blender?

First off, you’re not the OP, so your scenario may not be what he wants, but truthfully your simplistic example needs a simulation like the Hulk needs steroids, meaning, not at all. Your spaghetti drop could be done as simply as a spline IK modifier on a very simple rig, and then animated “manually.” A good animator could make it extremely convincing. If you want a sim solution, m9105826’s suggestion seems very feasible. That approach (sim the 1-D vertex “string”) might also work with a spline IK setup instead of an array. Hell, it could be done with only shape keys, even, though I doubt that’s an optimal approach. But by no means impossible. Sims are good when they are used appropriately, but they can also become a crutch to prop up weak animation skills – “Oh, we can sim that, we don’t need to animate it.” Bollux.

Here’s a .blend illustrating my last post – no sim, just plain ol’ traditional keyframe animation & anim curve tweaks. I use two types of “noodle” (see layers 4 & 5) to show how their geometry affects the result. The animating rig is the same for both. 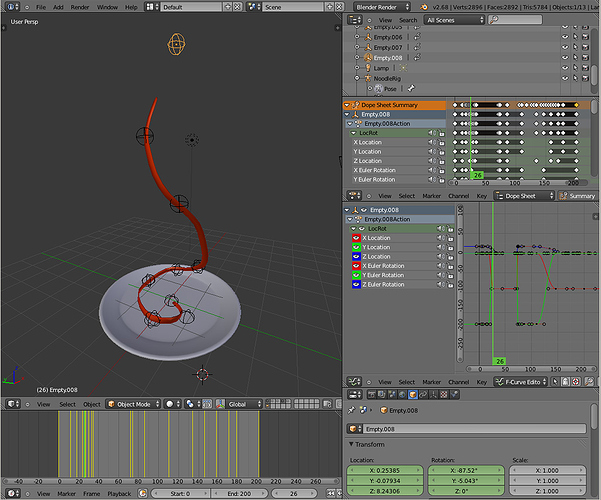 This is just a basic demo and could benefit from a lot of finessing, something a sim won’t allow without a lot of additional work. The most important feature is that the animator has 100% control over the result, something sims do not provide. No futzing about with parameters to find the “right” settings, no having to find workarounds to the sim’s limitations (which can be many). Wanna do animation? The BE an animator, not a sim junkie.

But I will look at your scene and try my hardest to understand it when I get the time. Thanks!

The scene is not at all complicated: Two noodle meshes and a plate mesh. One armature with a Spline IK constraint. One curve, and handful of empties used as hooks. Done.

What I’m hearing (reading) is “This animation stuff is too hard. I want an easy way!” No such anjimal, my friend. Get your hands a little dirty, don’t be afraid to learn the ropes (pun definitely intended)

Eh well, I guess you’re right. I will look at your scene and try to understand what the heck is happening when I have time.