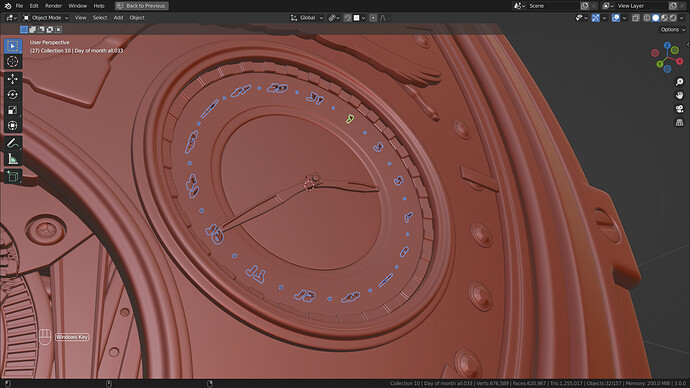 Spent far too long on this. I cant figure out how to rotate these numbers and dots individually by roughly 80 degrees so they sit on the face or through the flat face of the object (dial) behind it.

If for example I wanted to rotate the 31 at the top, I could just do that by typing r x 80. but how can I do them all at once?

Ive tried so many combinations of rotating by individual origins, using different global transformations, normals, local etc, in and out of edit / obj modes, moving origins and cursor, using r zz or xx or yy. Everything has scales and rotations applied, but I still cant figure it out.

Ive tried by combining all objects as 1 long object and adding a circular curve modifier. Ive tried rotations using a particles system but still can get the desired result.

I know there’s a way without having to do them individually. Please help

Many thanks. Hope youre having a great day!

Are all the objects needing to rotate on their own local x axis?

You should be able to do this with a combination of local transformation origin and individual origins.

Select all objects and do the same key inputs: r x 80.

Thanks but ive tried that and no go. 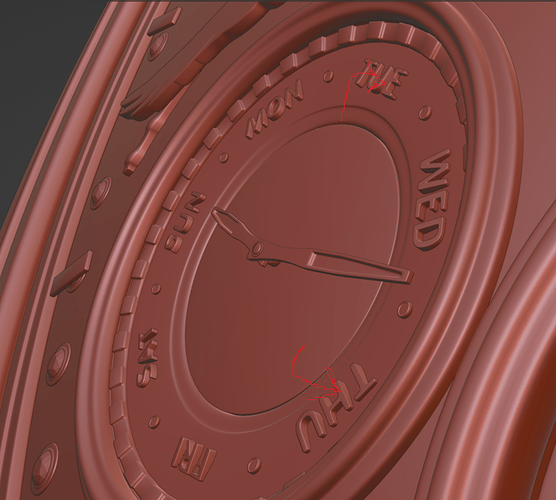 but you did rotate each of them on their own local x axis and by the same amount, right?

I made a video for what I said in my previous comment:

Thanks Unyxium, yes thats exactly it!! hmm its not working for me though, let me see… 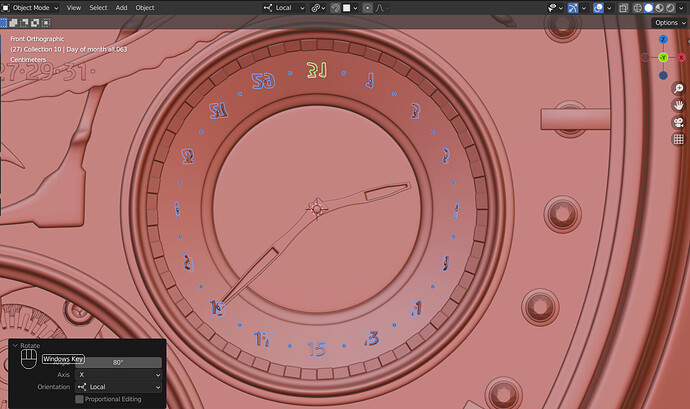 The mon tues etc, i placed in position and in edit mode selected the top edges of the letters and used proportional editing to push them back on the y axis to give me that angle

if you provide your blend file, we can easily solve it. Unfortunately we don’t know how you created the numbers, whether scale or rotations are applied and where the origins are. And all these things can influence how your object will rotate.

That probably explains the difference, then.

If the objects themselves don’t have their rotation set up in an organised way such as what I show then it might require a bit more effort. (see how when I click on the numbers in the video, the axes shown align so that one points towards the center).
Like @Blender_Fun1 said above, we’d need more info on these objects to be able to know what’s the best way to solve this.

thanks guys, here is the blend file though I’ve moved it into a new project…

I can’t figure it out. It’s so much harder when the rotation isn’t aligned the right way and I am not sure how this can be fixed. There might be a function that can fix the rotation (basically the opposite of apply rotation) but I don’t know of any.

I’m also thinking one other option is to use blender’s python API but I’m not sure about what can be done there either, maybe find the object’s position offset from the center of the clock and convert that to a rotation?

Thanks so much for trying, i do appreciate it. I’ve never used python so might have to take a look at that. Perhaps it is because i have already applied rotation and scale etc, hmmm.

Problem solved!! Fortunately the numbers came from a particle system I setup and I still had the emitter object, so I made particles real again. The rotations of new objects where not set at 0, and turned as expected using the methods you kindly showed in your video Unyxium. Local transform, individual origins, rotate on x axis. I had to do it in two halves though as the bottom half and top half of dial are different to give the watch owner a better view of the numbers.

Thank you both so very much for your help with this.

Have a great rest of the day!

Just an update, I did have to manually rotate some of the numbers on the local z axis also, very slightly, not sure if it because my plane (dial) that I want the numbers to sit on is a bit skewed, or if using centre of mass for some of the non uniform numbers is making it so. Either way I got there in the end… Thanks again. 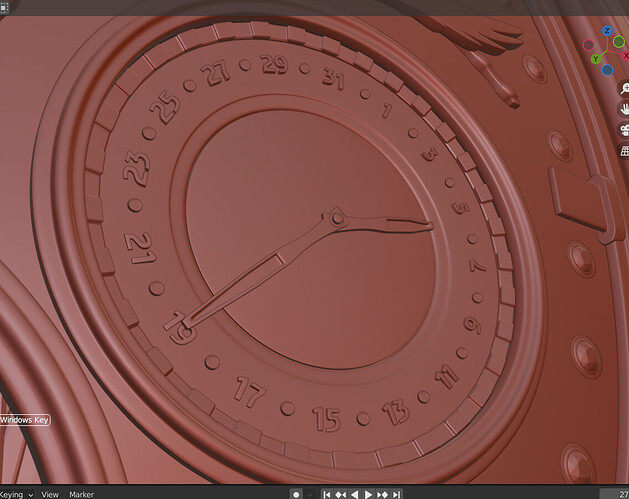 Generally it’s good not to apply rotation on such objects because you’ll want to use their local axes at some point, and applying rotation “destroys” those.