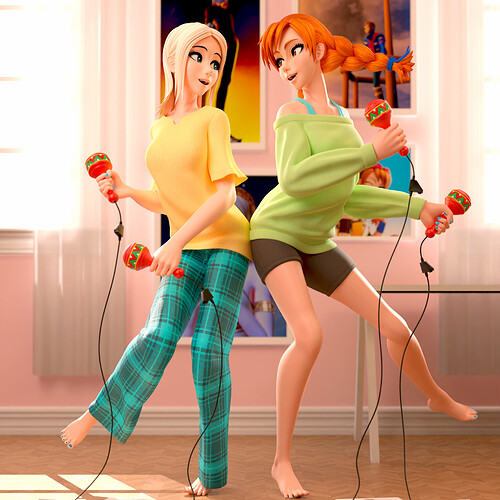 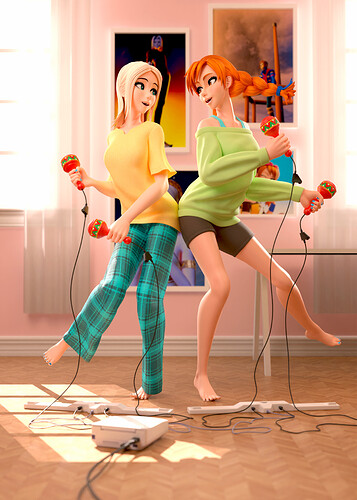 This work depicts two of the heroes from the game Skies of Arcadia, an RPG released 22 years ago on the Sega Dreamcast, anachronistically playing Samba de Amigo, another Dreamcast game, using its unique motion-sensed maraca controllers. The background “paintings” are actually experimental, incomplete, or otherwise WIP renders I’ve made before, as a sort of collection of my fanart within a fanart. The head and body models were somewhat finalized before work began, which saved time.

This was created in two weeks for a Skies of Arcadia fanart anthology and booklet to be presented and distributed at Comic Market 101 in Japan in late December, 2022. More information about the anthology can be found here: https://ea20th.com/20th-anthology/. I had been planning this scene and improving older models before I realized the anthology existed, and did not have a lot of time left to do what I originally intended, but I adapted everything accordingly while working on it. It ended up being much more dynamically posed though, so it worked out better, maybe, haha.

I’ve been working on an over-arching Skies or Arcadia fanart project for about year+. My goals have been as such, in order of priority:

Anyway, I appreciate being featured! I hope to create even more things in Blender, which I enjoy greatly!

Thank you again! Appreciate the retweets too! 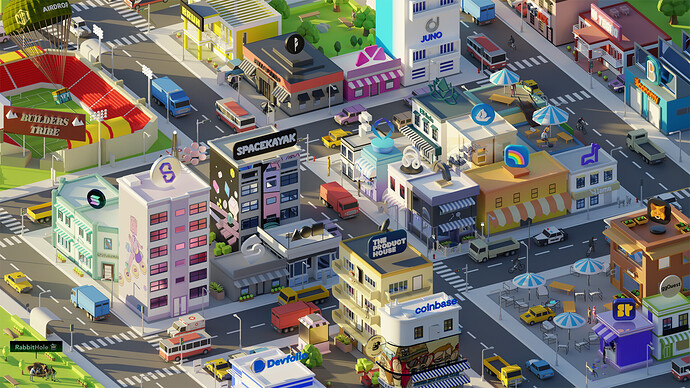 Great work, love the dynamic poses and the vivid colors.

Thank you! I tried to be better with the composition, lighting, and colours due to my weaker texturing ability and lack of time to do things fully. Got to make up for weaker skills somehow

Appreciate the kind words! Originally, the imagined scene was for them to be typically sitting on the ground and playing with the default Dreamcast controllers, but because my model/sculpt attempts were taking too long for those, I adapted the scene for them to “dance” instead. It’s probably better this way, maybe

Love the DreamCast! I had one back in the days. Soul Calibur was my favorite game, particularly in two-player mode.