I made this for the Weekend Challenge, but I didn’t win…

I decided I’d post it here though, to get some advice on what I can do to make it better. 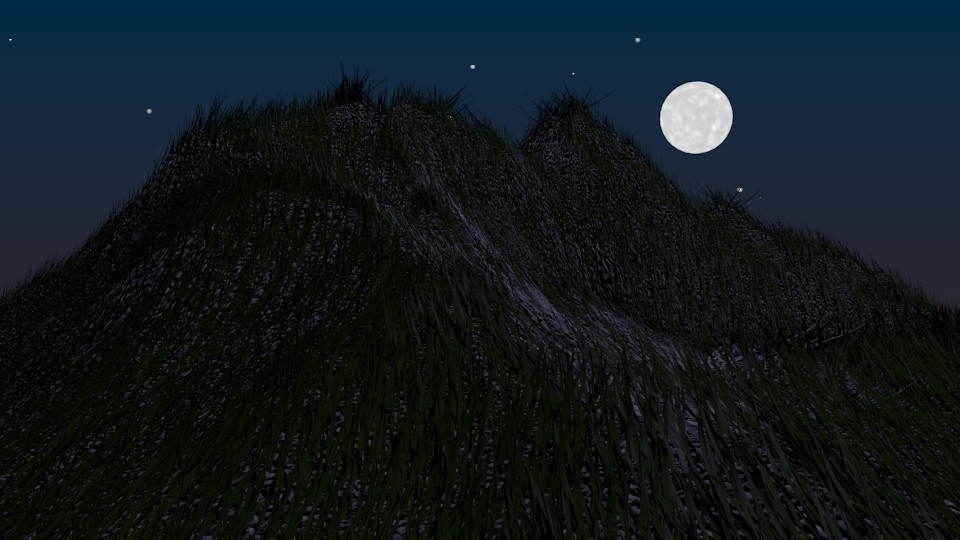 its really not that bad…

just the grass could be a little thinner and maybe a more sandish texture. the sky could be darker with more stars, the moon looks good, maybe just a little more detail.

sand dune? Have you ever saw sand dunes?

Thanks for the feedback.
@Terminator: thanks I’ll work on the grass, I think it needs the most work.
@namekuseijin: Yes I have. There are some at my condo that look like this. I’m not talking about desert sand dunes if that’s what you’re thinking of.

I think it looks like you need to duplicate your emiiter mesh and set it to a material that looks like sand, since right now it looks like I can see only the sky from behind the particles/grass.

I still think you need a sand dune under that particle grass is all I’m saying… if you duplicate your emitter mesh and render with another sandy ccolored material, that will add to the illusion.

just add a light at energy 0.2 so in a way so that we can see the grass

Its a start. I have seen plenty of dunes like this. I don’t know how far you are planning go with it, but here are some suggestions.

You might want to map a Noise texture to Normal and maybe to Color a little both to break up the sand some.

If you add more light you might find that the grass looks really harsh. To fix that you can use a Blend texture and ramp the color(darker at the bottom of the grass). Just make sure you map the Blend texture to Strand/Particle. Making the grass somewhat transparent at the bottom and fade in might help too but it might not be necessary for a dark scene. There’s also Width Fade.

Also, judging by the size and width of the grass it looks like the camera is close to the dune. If that’s the case, a depth of field effect might look good.

Hope that helps and good luck.

Ignoring my suggestions is perfectly normal, I do it all the time:confused:.

at first glance i was like:
Whoah, blank black image with a circle… That’s how a sand dune looks like?

[QUOTE][/QUOTE]
Sounds like someone needs a new monitor. To me it looks like the Oregon or Washington coast around 10:21 PM sometime in July. Give or take a couple of seconds.

sand dune? Have you ever saw sand dunes?

on the odd occasions that it rains in the desert sand dunes can look at that, its been raining a lot here in Namibia where we have the oldest desert in the world and some of our sand dunes currently look like that it bloody amazing seeing the desert green

Overall it’s really boring. There’s nothing really interesting going on the scene. The grass/dune should look super realistic or otherwise cool to make this image stand out at all. I’d do at least this: