Santa : The keeper of the north

Here’s a render I made for the last Christmas Blenderguru competition.

I didn’t have the impression that I had progressed a lot this year but finally I was wrong. I did not do as many projects as before, droped down a lot also (I’m still not sure if I’m going to continuate the boxing gym I was making before this render) but my understanding of Cycles as grown up a lot just by experimenting. I sculpt better than last year, I retopologize now and each time better, my understanding of human anatomy and especially the face is also much more accurate than what I used to do before. Why am I tellnig you all this ? just because I started to really learn 3D and Blender in january 2014 so naturally, the end of the year also means a Blender year and a check up of what I learned.

The mood I had in mind for this render was a bit Celtic/Viking/Fantasy. I didn’t want to make a Santa in reality. I find him quite boring. But I remember than that it wasn’t always the case and the Santa figure can be mysterious and a bit creepy sometimes. The majority of people here in Europe now Saint Nicholas that is very closed to the character of Santa Claus (even the name is quite the same). Saint Nicholas now, as Santa, brings gifts to the children. In Switzerland he offers more tangerines, peeanuts, chocolate, biscuits etc. etc. and he knows when a kid has been acting wrong or not. He’s not alone, he’s got a friend, a very mean one called “Le père fouettard” and he beats the hell out of the boys with wood sticks if you were bad (demonic lough hahahah).

So as you can see the folklore surrounding Santa is not always bright and cheesy.

Another thing also is the connexion between the figure of Santa and the one of Odin. Odin used to know everything. He could see everywhere and know everything, even read in the memories. He used to travel a lot, he was a wanderer, an artist, a poet, a warrior too… He could appear to you in a very huble appearance, as an old traveler.
Before having deers, Santa was represented in a horse, much more like Odin. 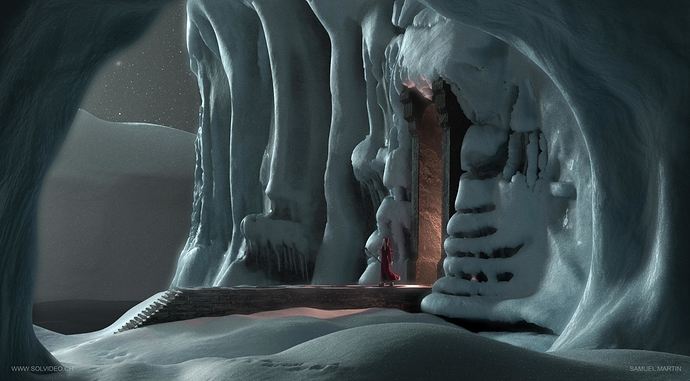 I would shoot a fantasy film out of it.
Great work!

Thank you Vejn, your comment means that I succeeded to pass the mood I initally had in mind. I’m very happy with it

Could you render the scene with with film view setting in color management ?

Long time no see. Love your image, not sure if you anticipated this, but that opening to the left and the footprints in the snow that are going there makes me very curious as to what is around that corner. :yes:

@vejn I’m not quite sure of what you’re talking about. Do you mean if I managed to applicate a LUT in relation of the different “emulsions” or type of flim (Kodachrome, Fugicolor etc. etc. ??) If that’s what you meant then no. I don’t know why but I don’t manage to find those settings if I load an already rendered image. I find them and can applicate them just after the scene was rendered. I’m sure there’s a way but sometimes I’m quite dumb and I couldn’t find the way to applicate it after. I had to render the two first layers and the cut the render of the second one because of the competition deadline, save them appart and then I started to render the last layer while I was experimenting quickly a some compositing and color managements in photoshop. The last layer rendered I saved it applied it in PS and gave the image to Andrew just 15 minutes before the deadline.

I’d like to try to render it again with film emulsions pre sets but my render finally isn’t very photoresliastic anyway. Should I bother to slow down the hell of my PC 15 hours almost for that ?? And at that point my card can’t handle the scene neither ( GTX 580).

I want to go to another project now. I got a lot of ideas but I want to find one that I’m sure I’m gonna finish.

Thanks Speed 7 (or 7777 if I remember correctly). I saw the render you did on Blendernation I think. Congratulations, it’s very rewarding I imagine. It was the Poseidon one. Very good and risky. I tried once the liquid simulation once for a paid project but I called a friend of mine who knows Maya to convince the client because the particles began to jump all over the places. But even with Maya we couldn’t get the contract. We needed muuuuuuch more money and surely Realflow and techs who know Realflow and more money of course to pay them. I love to see the progress of yours and the renders you deliver.

To go back again on the subject of the footprints, I didn’t think so much about the story behind them. It cannot be an elf because they are too big. It could be human or the Santa himself. But sometimes in the snow with the weight, it’s hard to walk and the footprints you make appear bigger than what they are (but the surroundingsof the foorptint also look messier with chunks of snow). So… it’s free according to your interpretations. Or maybe it’s a Bigfoot (with tiny foots

Have a Merry Christmas Shaun, it’s always a pleasure to have comments of yours.