(Yeah it was on Scatter city tutorial) I think a screenshoot would be enough. What helped me was the buildings example that scenecity 1.6 has. I also had problems with creating the road, but looking in the example all was clear.

I can’t complaint, I found your documentation very good. Simple, informative and concise.

My deal here was some observation to make easier to follow the written Material. You see, I just had problems on 2 things. That’s very good. And you are very accessible. That is even better, thank you.

Yes the doc could be made even better, written content is not ideal for everyone. I will make video tutorials progressively.

Hello, does SceneTerrain works with 2.8 ? I can’t get it to work. And what’s your plans for the future ? I am very interested in getting everything you got to offer… Also when i extend options in SceneCity panel nothing shows up. I can’t import library of roads.

I’m currently porting SceneTerrain to 2.80 / 2.81, first results coming in the next release 1.7, in about a month. It’ll be much more versatile, flexible, and integrated with the cities, with improved integrated assets. It’ll take a few releases before all functionalities are restored, but the most important ones will be ported first (along with improvements), so it’ll be usable as quickly as possible.
In the meantime you can follow me on my twitter, or SceneCity’s newsletter for development updates, and if you want to give feedback on SceneTerrain’s development.

For the future of SceneCity, besides constant improvements and refinements, next on the list are polygon cities, in addition to scatter and grid cities. More news on the same channels.

Also when i extend options in SceneCity panel nothing shows up. I can’t import library of roads.

That should not be the case… SceneCity’s panel, in the scene settings, is obsolete now (everything now happens from the node editor, as explained in the doc), and will be removed at some point, but it should still work.
Could you open SceneCity’s panel, and then open Blender’s console and show me what’s written inside?

I have managed to fix that yesterday, i’ve opened library.blend file in app data folder, then i saw that this panel is accessable from that blend file, next from that blend file i’ve openened my project and then this panel show up. Dunno if it was a bug, but now i know way to get around it. I did use node editor while following tutorial getting started 1 , but now i’m on part 2 when you say to open scene city panel and import built in meshes and roads : ) I can’t wait for SceneTerrain to be ready, this plugin is awesome.

Dunno if it was a bug, but now i know way to get around it.

That’s good that you found a solution

But that’s not how it should be done for now… please see below.

but now i’m on part 2 when you say to open scene city panel and import built in meshes and roads : )

I think you might be following the old documentation for v1.4, which is for Blender 2.79. If you use the latest SceneCity 1.6 for Blender 2.80, you should follow this version of the doc instead. It is accessible from SceneCity’s main page.

hey again, ehh i need a help. So i’m trying to make custom road based on grid layout and i have this problem. 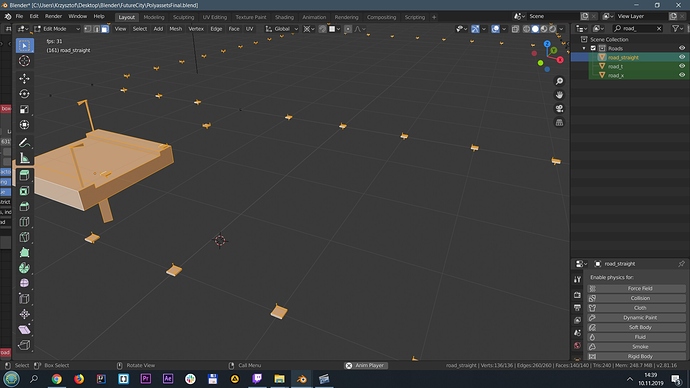 I could size up road portion model in edit mode but i want it that size i have now, i just need more of those road portions corresponding together so they actually look like road. Any advice? I tried to follow the doc but it looks like i don’t get it…

This road portion mesh i made worked for a simple road layout but i just can’t get it to work while making it with grid. 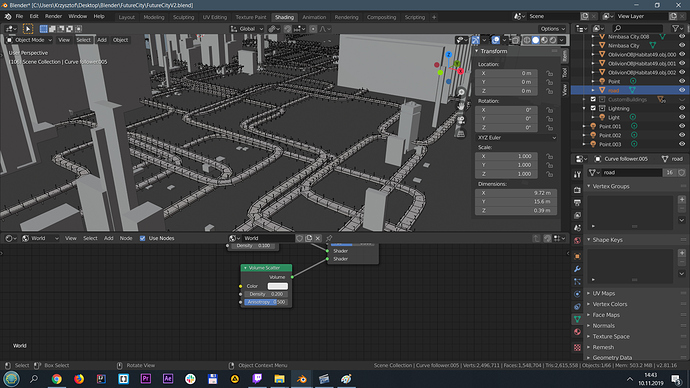 The roads for grid cities… what’s the issue? What is it you don’t get?

You’ll need 3 models: straight, T crossing, X crossing. They must fit when placed side by side. Also check in the preset grid city graph how the road models are input and used in the graph. You can also start from the high-poly assets, check the road portion models, how they’re made, deconstruct them, so you understand them, and you can then adapt them to your needs, and make entirely new ones.

Just a little tip for people looking to create night scenes: Since there are no buildings with lit windows included yet (as far as I know of), I simply animated many point lights ‘cruising’ through the streets of the city. This already ads a cool night-time feel. Especially when seeing the animation. There are no included buildings with lit windows yet. Thank you for sharing your method

The render looks nice, do you have a demo video?
There are so many ways to add lights to a city, I’ll post renders and methods when I’ll tackle night scenes more seriously!

Sure, here’s a short video. I did some post work in After Effects on this one.

I used this for the director’s cut of one of my commercials.

Hey Arnaud, are you going to make a tutorial video on how to use this in 2.8/2.81? i bought it last week and cant figure out how to use it

Hello @redlightning,
What helped me on the beggining was this 2minute video
https://youtu.be/bKA02BFaNTg

And the documentation online from the developer website. Using both I was able to do a lot of things.

But watch the video and you´ll be able to do a beautiful city really fast.

Thank you Carlos for pointing out to the doc and Markom’s videos!

Hi Jett. As @Carlosedubarreto wrote, if you follow the doc, everything is explained in it. I agree, video tutorials are much easier to follow, it’s on my TODO list already.
If you have any issue, let me know

this addon is more than 10 yo

Nice plugin mate saved me bunch of time. Used the node tree buildings for background elements. The old way to do the main buildings.

The animation was for a conferance opening video. Needed to turn a project around in three days. Plus needed it to be a night scene so mucked around with materials and lights a bit and got quiet a nice result. Used eevee to render it all out… 6 secs for an extreme wide screen setup.

Here’s a link the video!