For school I have a creative assignment and I thought I would use blender to make a scene for Othello (Shakespearean play). I chose the final scene and it feels like something is missing.
For got to mention that i know im not close to finished.
The final scene takes place in a bedroom of a castle where three people die.
Anyways c & c is always welcome.

I saw the first seemed to dark so i brightened it up a bit:eyebrowlift: 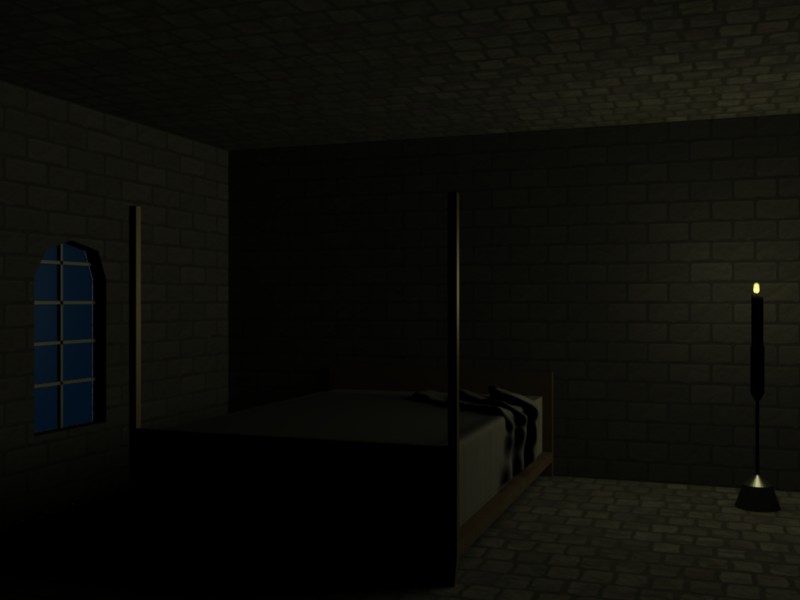 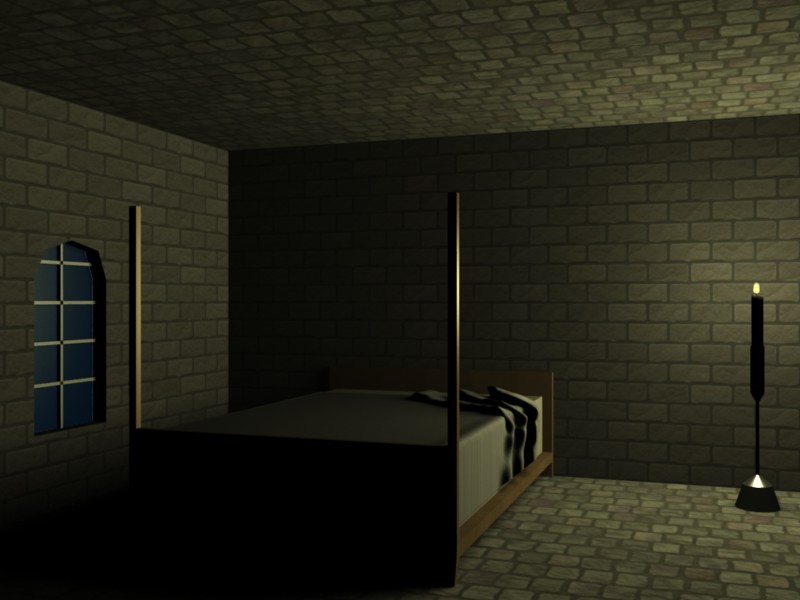 Could you show us closeups of the bed, etc? It looks great so far.

Quite a bit empty, though.

It takes a while to render the pictures. I added a few more parts to the bed and just remembered that i still need a better texture for my sheets and bed. Also if anyone has any idea for other stuff i can put in the room that would be helpful.

I cant find the blend file right now but i should find it tomorrow. 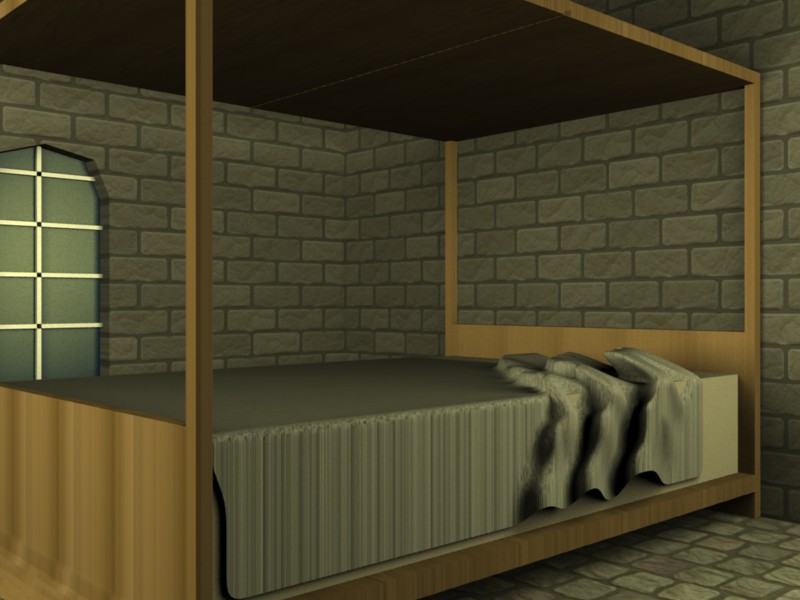 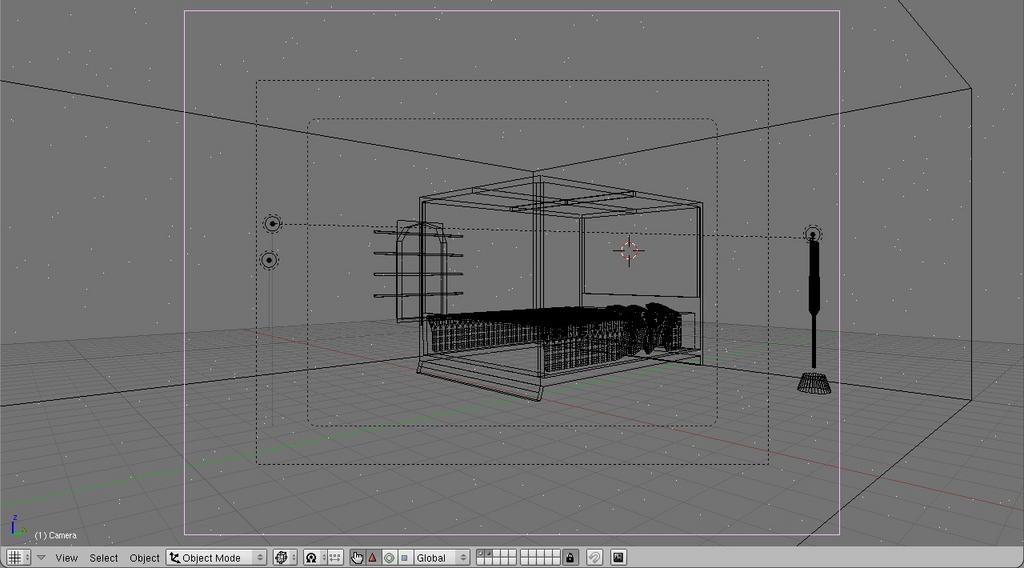 Cool. All right. Well, the ripples on the bed are cool but the edge of it is so straight. The map is so stretched out…I think it would be better if you just used a solid color with a tiny bit of normal textureness. Some pillows might be nice, too, along with some curtains around the foreposters. Little odds and ends, like added spheres or something could help enhance the picture as well. The candle holder itself looks a little too modern, imho. Also, I think the window should have a bit of iron grating around it. I really love the lighting and the walls. It does look quite nice.

Pretty good so far. The model of the bed is nice. Just the candleholder is somehow wrong like celestialberry already said. I’d perhaps use a candle attached to the wall on each side of the bed.

You’ve made the bedroom look like a prison cell with the stone walls. How about a tapestry on the wall an a rug on the floor to warm the room up a bit.

Thanks for the help. Here is a quick update and I still need to work on it but I just rendered it and it took 25 minutes:eek: for this latest render. Sorry I cant upload the blend file as it is too large. 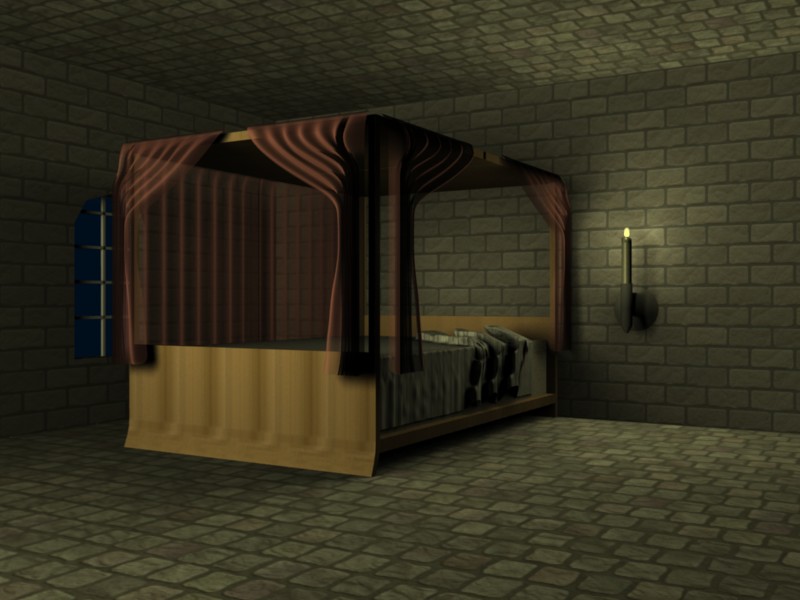 I’m curious as to why this is taking so long to render, and why the file is so large. It seems like a pretty basic scene.

The lighting could be more dramatic, perhaps some moonlight through the window and the candleabra only, creating a focus at the bed?

Bevel the bed and add some moon ray with a halo. Also, is AO on? I would suggest using it.

It’s looking good. I especially like the walls, and how the cloth around the bed (four-poster?) is semi-transparent.

I think the base of the bed where you have the image mapped to looks extremely fake. The image of the boards sticking out aren’t fooling anyone. I think you’ll just have to give in and model them.

I decided to model a quick one myself. It’s hard to tell from the picture as to what they’re supposed to look like, but here’s what I made in about 10 minutes. The texturing is all really quick procedural, but the emphasis was on the model. 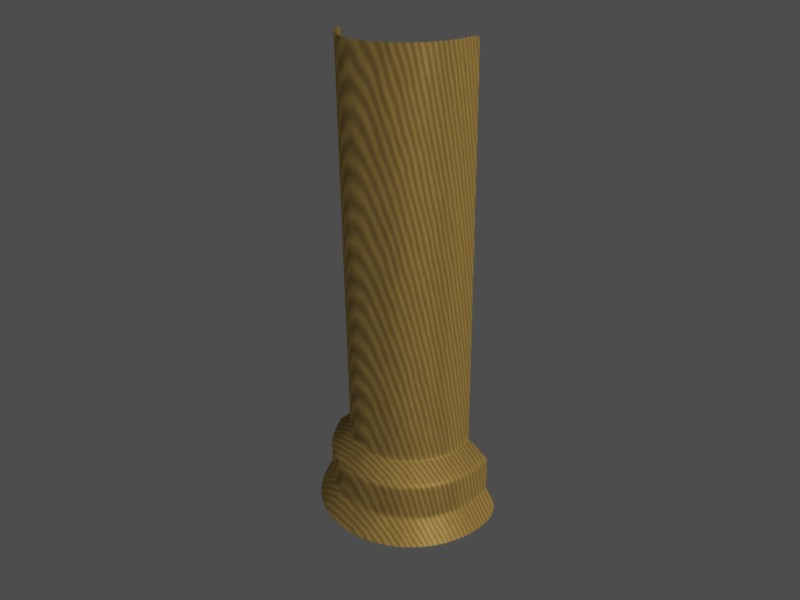 The ceiling should have support beams and both the floor and ceiling should be wood. The exterior wall isn’t thick enough for a castle and the window needs a framework.

3D projects for school are quite challenging. Your invested time and effort may be ignored if the final result is poorly presented.
If its an English (language) class, make sure that you have correct spelling/grammar/etc.

Try getting some pictures of the scene when it’s played, it would give you a good advice on what to do. The walls might need a bit more irregularities. Then try adding some more objects in the room, because it looks a bit empty right now (although I know your project is far from being finished, so I don’t think I’m really helping you, but it’s just to make sure you don’t forget it!). The rest looks pretty nice otherwise.

Here is another update on the project. I wont be able to do much more for the next couple days because of a three other projects but as soon as I am able to I will put more stuff.
Jay, for the amount size I still haven’t figured out why it is still large (1mb) and the long render time, well, i have an old pentium 4 and an old video card which might be the cause. Also, i lit up the whole room so that people may have a look at the general idea:D and i like the idea about the moon light although i dont have the slightest clue about applying it.
Darklink224 i did bevel the bed for this new image but the halo…

Wehrdo, thanks for the idea, i had no idea what to really do for the posts so this would help.

Jestmart, I realized the ceiling looked odd but I didn’t know what to put there so I just made the same as the floor. But for the floor I think I’m going to go with a rug over it to make it look (ironically) nicer.

Thanks again for the help.

And now finally the hi-res picture itself. 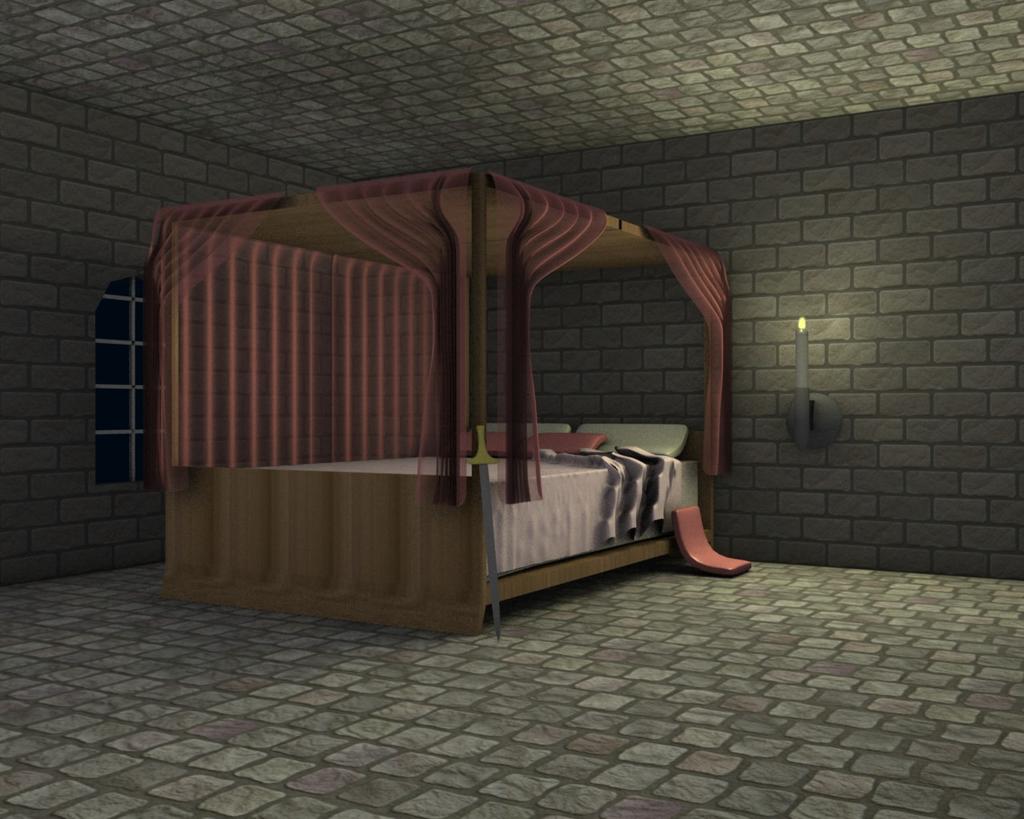 I think the ceiling, who’s issue has been raised earlier should be plank wood, with some cross beams to hold it firm. The texture should be easy to find, however your render time will increase if you use plenty of planks. Be careful about this if you choose to have planks above, as the plank texture should be kind of random. All the best!

A wooden ceiling might work but you could also make it into a vaulted stone ceiling. A flat stone ceiling just looks too fake (no offense). A bed side table might also make the room look less empty.

If you really interested in accuracy, the room should have a Spanish and/or Arabic influence, since Othello was a Moor.

If you really interested in accuracy, the room should have a Spanish and/or Arabic influence, since Othello was a Moor.

but remember I said this is the last scene so it takes place in Cyprus. Although they may of brought some things from where they lived…:yes:
good idea though i hadn’t thought of that