Here is a new render I’ve created. This one started out with the desire to create some sort of desert render. After looking at some references of other desert based scenes, I was inspired to do something, but not sure exactly what. I created an abstract structure, and used it as some sort of sci-fi beacon. This mysterious cloaked figure as just come upon it.

I created this image mostly as a study of compositing, not focusing as much on the story, but I created in my mind something to explain what was going on roughly in the scene. I would post the node setups for the compositing and materials (and I can if anyone is interested), but I created some huge node trees.

As usual, all textures are completely procedural. 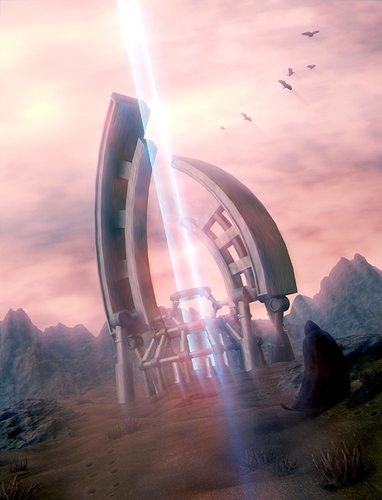 The shader for the structure could use some work – I threw together a quick metal material, which could be improved. If I ever revisit the scene (though I consider it finished) I would probably substitute is for an old, grungy metal shader.

Here is a viewport screenshot: 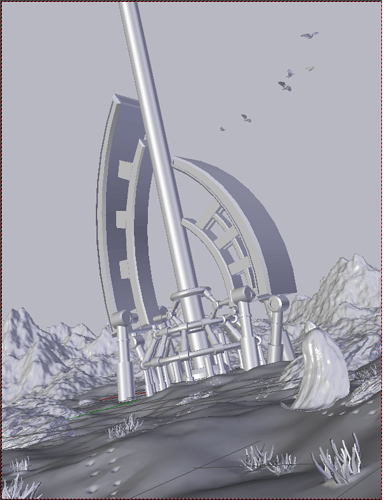 I hope you enjoy!

What you have created here is very nice!

I think the addition of some shadow-casting lights where the beam is would help illuminate the inner-structure of the beacon and produce the outer shadowing and light variations that could make this more realistic looking, if you wanted.

Some more contrast, atmospheric DOF (depth-of-field / blurring, and a touch of noise might also move this piece more in that direction.

The contrast I think could help distinguish the beam from the environment.

I’ve prepared a quick example with these things in mind: 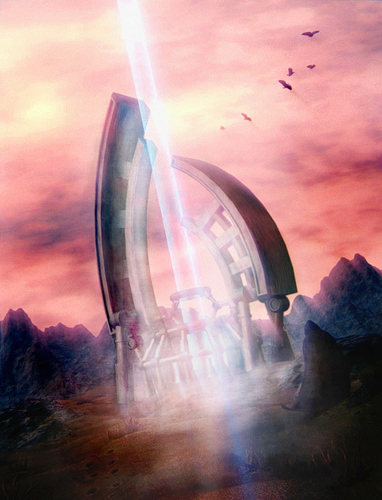 Thank you for sharing your image!

I look forward to seeing more of your work.

I’m glad you liked the image!

I like your variation on it too! One of the things I had trouble with was getting some good contrast for the shadows, as I used mainly one HDRI, which pretty much illuminated the whole scene, without much defined shadow. After more experimenting, I decided I liked the feel of the image with very subtle shadows. But I do realise now that a simple contrast filter would have been beneficial.

I am always hesitant about Depth of Field (I believe that is what it stands for), as it can make the scene look smaller in scale, or can take away the detail I wanted in either the background or foreground. As in this image, the beacon and figure share equal importance, I thought DOF wouldn’t work. In your example, everything is executed very well! I didn’t think of adding noise, but I see now that it produces quite a pleasing effect!

Was your example here achieved with tweaks in photoshop?

After a few alterations, following some of your advice, I settled on this image: 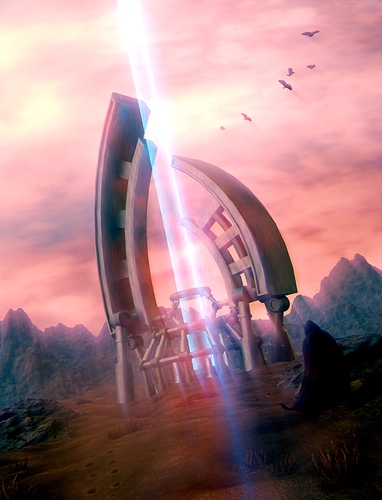 I am very thankful that you took the time to give some suggestions – I will keep this in mind for my future projects! Please do come by again!

I think your update looks GREAT! I really appreciate your effort in this piece.

Yes, you are certainly right about “Depth of Field,” and I corrected my post.

DOF can be a handy faux atmospherics tool when used in just the right way. It’s always different with every image.

One thing I generally encourage Blender users to do is to explore, and whenever it makes sense, to use Blender’s phenomenally flexible render nodes system.

For example, for a lot of renders, a simple RGB Curves and/or Brightness/Contrast between the initial Render Layers and final Composite node can help make a dramatic difference in the final results with some slight tweaks.

All of that adjustment activity can be conducted easily and entirely in Blender.

Even something such as a touch of noise is simply achieved in Blender if you use a slightly multiple or overlay (via a Color Mix node) on the final render result with a Texture node loaded with a basic Blender procedural noise texture.

For the sake of my earlier example, I used GIMP by necessity.

Congratulations on the awesome update! Keep up the great work!

Thanks for the response!

I think I may have gone a little over board with crushing the dark colours, as I have lost most of the detail in the cloak, but I agree overall that it is an improvement from the first image.

I have thoroughly enjoyed experimenting with all blender has to offer. Nodes happen to be one of my favourite parts, both in the shader and post-pro stages of the pipeline.

I personally try to complete projects entirely in blender – this has included attempting to make projects without image textures – the procedural ones are insanely versatile.

With each project I learn from mistakes, and improve my skills.

Thank you (and everyone who has visited this image) for all of the support!

While may be missing some “small details” i agree with RobertT, good work!

Thanks! I wasn’t focusing on the detailed modelling aspect as much in this project, but I am glad you liked the overall result.

My next post will be more detailed and model – oriented.