script does not work why

Why does not my script not work? I did it right.

There’s lots wrong with this blend. But we can fix it:

Why does not my script not work? I did it right.

I guess the bge does exactly what you told the bge to do.

Here is what it says in the console. 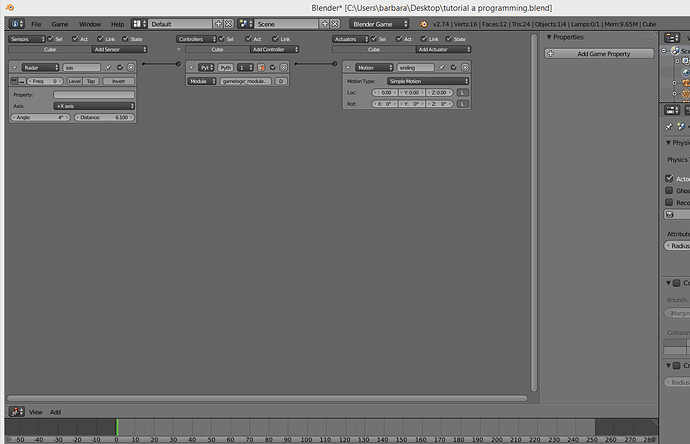 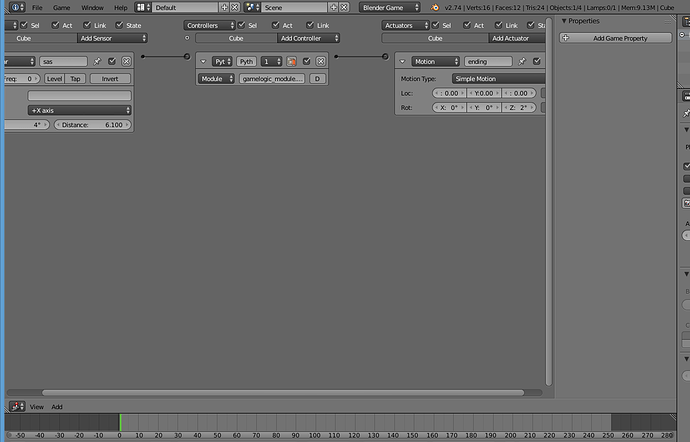 I would say … you have “No module named ‘gamelogic_module’”.

Do you think you have a module with that name? Maybe it is a spelling error.

Did you look at the pictures?You need to click on to see them .

Your images do not show any modules.

You have written a wrong name in the controller brick.

Okay, here is the blend.Take a look at it.

In python Controller brick you are referencing “gamelogic_module.main” which should be formated like module.funtionName, but you dont have a function named “main” and a module named “gamelogic_module”.

I used the script templates that come with blender.So they must be wrong or outdated.

There’s lots wrong with this blend. But we can fix it:

Hi, I edited my post after someone else posted, here I’ve detailed all the problems one by one. and posted a fixed version of the blend file.

Sorry for my noobiness.But why does not the script work?

Thakyou for your help. I did not know you could do it that way.I am still a noob programming.

In this specific example, adrainsnetlis is correct. However, I think it’s also a good idea to look at why you thought that would work.
It seems like you’re writing code that you’ve made up, without referencing any documentation. It would be great to have such an ability when writing code, but unfortunately due to the fact that everyone has their own way of writing things, including APIs, I have to refer to documentation when looking for things that I’ve never used before.

In addition, code doesn’t just “not work”, it will (in the case of Python) throw an error message, to indicate something happened that wasn’t supposed to. There are rare occasions when the code is legal but doesn’t do what you expect, because you’ve asked it to do something slightly differently.

So, in this example, to work out why it doesn’t work.

This is the error message in the Python Console. To show the console on Windows, go to Window/Toggle System Console (in Blender). For Linux / MacOSX, launch blender from the terminal, or run the embedded console app.

This error says the following:

Which means that the Python script called t.py was the script that failed, at line 7, which is in a function called “ender”.

This means that the Python object* for the Radar sensor does not have an “attribute” (anything after a full-stop character, like sensor.positive, cont.owner, bge.logic) called “negative”. It does, however, have a positive attribute!

*NOT GameObject; In Python, every “thing” is an “object”. In this case, the radar sensor logic brick is, in Python, a KX_RadarSensor object (instance)

Most of the time, these error messages can be looked at by yourself, with no one else to help you, and solved. It will make you a better coder, and get things solved quicker.

The Python documentation is used to tell developers what API functionality is available, what it is called and where to find it. The documentation for the latest release of Blender is found here. You can also find the link by going to Help/Python API Reference (in Blender).
The BGE documentation is found in the Game Engine Modules section of the page. To find out what is available for things like sensors, you must look in the Types section (bge.types module), because all BGE “things” (sensors, objects, meshes) have a Python class/type that has attributes.

Of course, because Sensor.positive is a Boolean object, you can get the opposite result (if it is negative), by writing “not” in front of the result.

I used the script templates that come with blender.So they must be wrong or outdated.

Well, you did rename them, so it’s not a surprise it’s different

You can simple use a NAND or NOR controller.