Seams from islands not working

I downloaded a mesh that has a UV unwrap, but no seams. (The islands are based on which parts of the mesh are connected). I want to merge some of the unconnected parts of mesh together and it would be really convenient if I could just use the “seams from islands” function to create all the seams for me automatically instead of doing them manually. However, when I hit the button, nothing happens. I’ve tried setting Blender to factory defaults just in case an addon was causing the issue, but it didn’t fix the problem. Then I tried it with the default cube and it worked fine, so I know it must be an issue with the particular mesh I’m using. Also, I should note that I had to turn off backface culling in order to display the model properly. I don’t know if that’s relevant, but I thought I should mention it. If anybody can help, I’d appreciate it.

Could you share the blend file. It’s difficult to have any clue this way.

Did you see if the islands are separated by some sort of cut like the edge split modifier does? If the islands don’t share vertices the seams from islands will not work. Try to select everything and merge by distance to get rid of duplicated vertices and try again.

Once more, it’s quite complicated to guess hat could be the problem without seeing the file.

You guessed the exact problem. The islands were separated by cuts. Merge by distance fixed the issue. Thanks!

Unwrap failed to solve 18 of 61 island(s), edge seams may need to be added 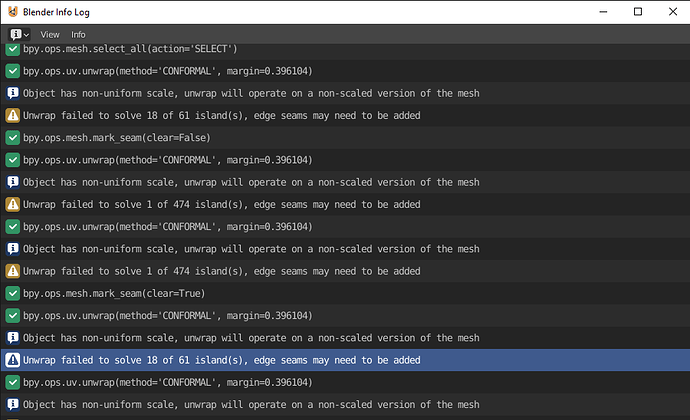