Hello Blenderheads! I’m looking for some crits on this piece I’ve been working on.

Here’s some more information:
Camera - I animated the track, and added some noise to the IPO curves to give it a little motion.

Compositing Nodes - I used a stack of Glare nodes in the compositor - Fog Glow, Simple Star, and Ghosts. I also used a Defocus node and a Curves node for a little extra depth/contrast.

Stars - found a texture map of the stars, mapped to a sphere.

PS - I do have plans on modeling a spacecraft so that it is hovering over the surface of the planet. Haven’t had a chance yet though.

Might need some more geometry, maybe (another?) displacement modifier? Look at 0:15… the line between light and shadow is almost straight, I’m thinking mountains and craters should make the line like a wee bit curved… know what I mean?

I definitely agree. The texture I’m using for Mercury has some real issues, but we just don’t have many images of Mercury to work with. I’m working on shopping a better image to use as diffuse, bump, and spec. I’ve also changed the soft size of my sun lamp so the horizon line is a little more gradual. New renders on their way, along with the ship I’m working on.

Updated vid, still needs some work, but you guys can tell me if I’m on the right track:

I think its good work, I think the music was a little poppy for secret alien stuff, but I’m not sure where your headed with this. I think it’d be interesting to zoom in a little and create some ground level models, also having it seem as though there’s someone filming in a craft would be interesting, like the camera is manned and not in a satellite. So the viewer is like “wait a minute, we dont have and ships capable of taking people that far, this is strange…” and 1 ship is ok but I think a surface teeming with ships like a colony would be more disturbing and interesting. but if you’re just implying one ship hiding out there, i guess you’re on track. but make the ship cool and do a close up fly around. I recommend adding a ghost glare node also, I love those things.

Thanks for the input. I think you’re right - the music needs to go. I’ll see if I can find something more appropriate. I also thought about some ground-level models, but I’m limited as to how far I’m able to zoom in due to my texture map. Too close and you can see the pixels :(. I’ll see what I can come up with. Maybe I can photoshop something that will work at closer zooms.

I like the idea you came up with, it seems like an extension of my original idea, and I think it could really work. An early version of this actually had a building on the ground, but I didn’t feel right about it.

I’ve also started work on a different ship model to go with this animation. I took the concept from http://conceptships.blogspot.com/. It was created by Kazutaka Miyatake. Obviously, there’s a long way to go with the model. I still have a lot to learn about hard surface modeling, and I’m a little out of practice to begin with. 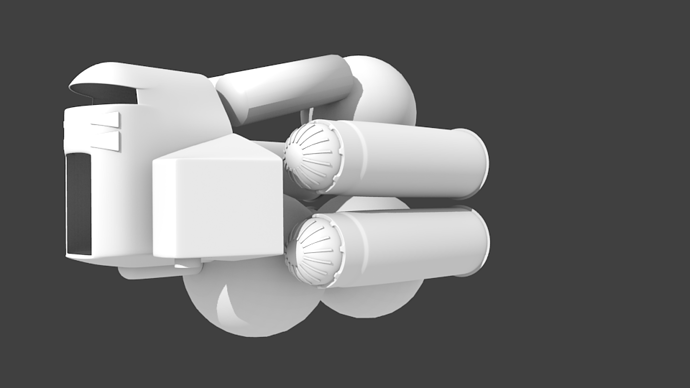 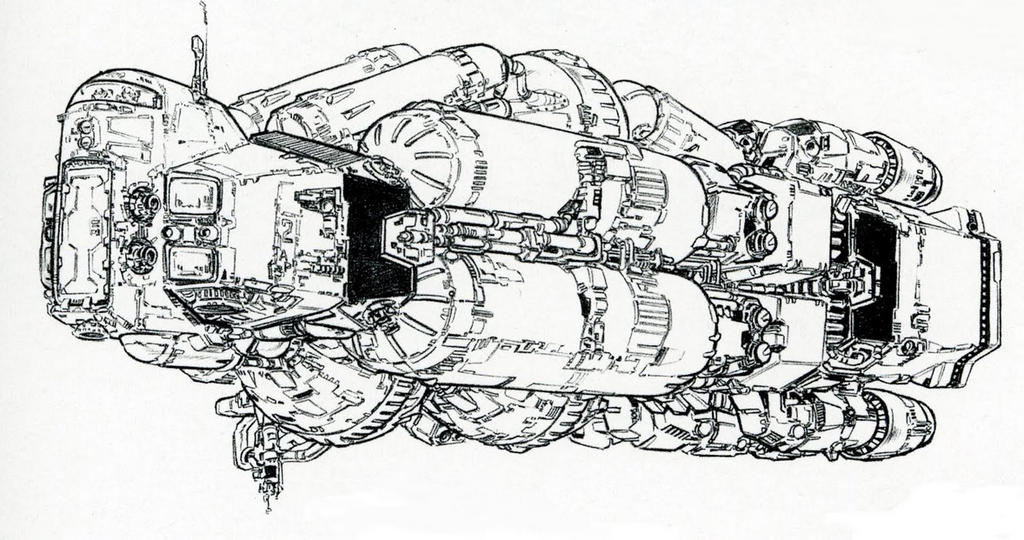 Looks pretty nice so far, Though the camera move is bugging me. The wierd zoom in and out give it an almost handheld camcorder look as oppose to a satellite orbiting the planet which is what I think you’re going for. I’d have a slow orbit movement, then instead of a steady zoom I’d treat the camera as if it had set focal lenses, 50mm have a transition effect as it switches to 100mm, then again as it goes to 250mm (whatever lenses work). that would make it jump a bit more. Maybe you could add some “Technical data” as an overlay, like Velocity, zoom percent, etc. to spice up the sci-fi feel of it.
My two cents anyways. Can’t wait to see more, keep it up.

Actually, I like that idea. I thought about using some kind of lens switching system, though that idea came a little later. I was originally going for some kind of user input control from earth, in response to the ship.

I really like the HUD idea too. Maybe I can incorporate some kind of targeting reticle or something as well. Good stuff! Thanks!

nice, but slow down the spinning around mercury, it would take a lot longer to circle it? other than that gorgous

The camera zooming in and out randomly will be more convincing if you can add the blurring as the camera tries to focus on the new level of zoom.
Something like in this video http://www.youtube.com/watch?v=1pJVJHUIK8g&feature=related.
The camera movement giving the notion that someone might be filming it as suggested by Springwater also seems a great idea.
Looks interesting. I feel you can slow it down a bit as a time lapse/Slow motion (on board camera) while the spacecraft floats over the planet. And switch between the POV being filmed by the astronaut.
Also the spacecraft wont actually be able to cast shadows on the surface of the planet being so far away.
Keep going. Good work…

Thanks for all the pointers.

@Evil Moon MOose - I really like the idea of a sunrise over Mercury, but I agree, the camera is moving too fast. Maybe I’ll try a film cut in there somewhere with some static or something.

@Sumazure - Now that you mention the blurring of an out-of-focus camera, I can’t believe I didn’t think of it before. For the second animation, I actually had a defocus node in there, but it was giving me some very long render times. As the animation was 1200 frames, and it was more a way to advance the concept, I opted to do without, at least for now.

These are all ideas that I haven’t though of, which is exactly what I’m looking for :). Thanks guys!

I’ve got the ship pretty much blocked out. I’m going to start adding more detail soon, but I’m hopefully starting a new job this week. Please tell me what you think! 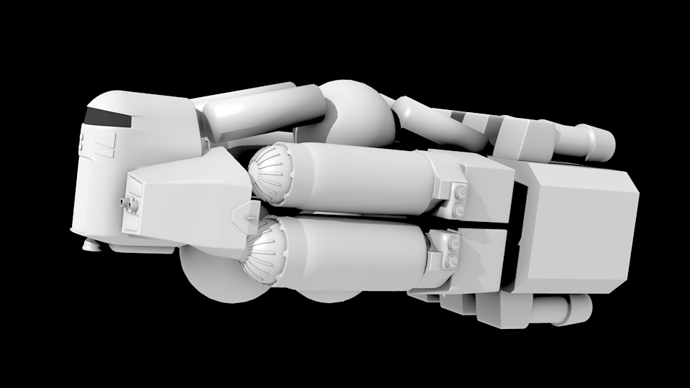 Question - I’ve setup an emitter material inside my engine housing here to help me get an engine glow, the only problem is the light is showing through my engine casing. I have indirect lighting turned on in the world settings. I’ve tried encasing the emitter in a mesh with the normals facing inward, but it’s still showing through.

Anyone know of a fix for this? See picture below: 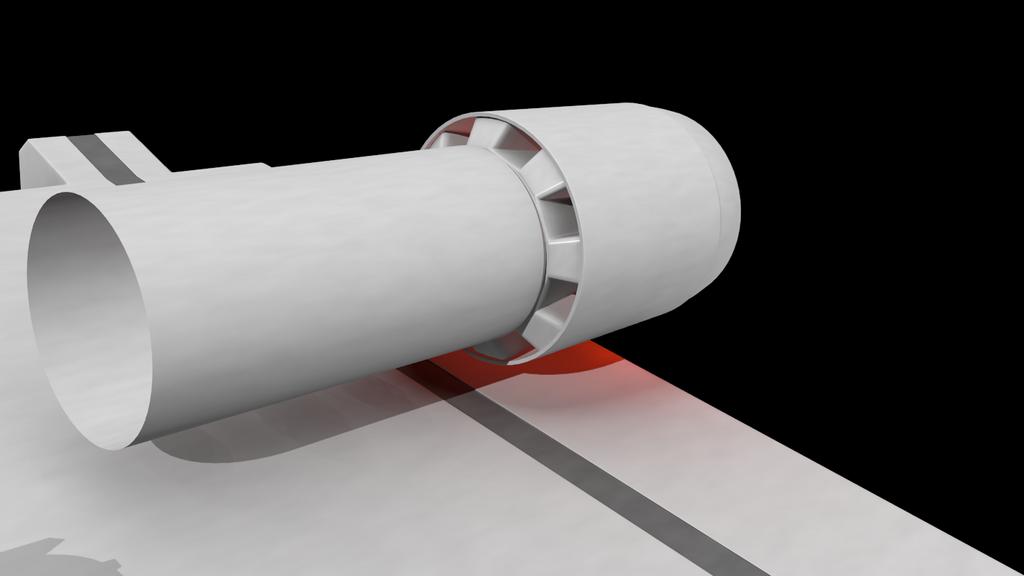 As always, please let me know what you think. Thanks! 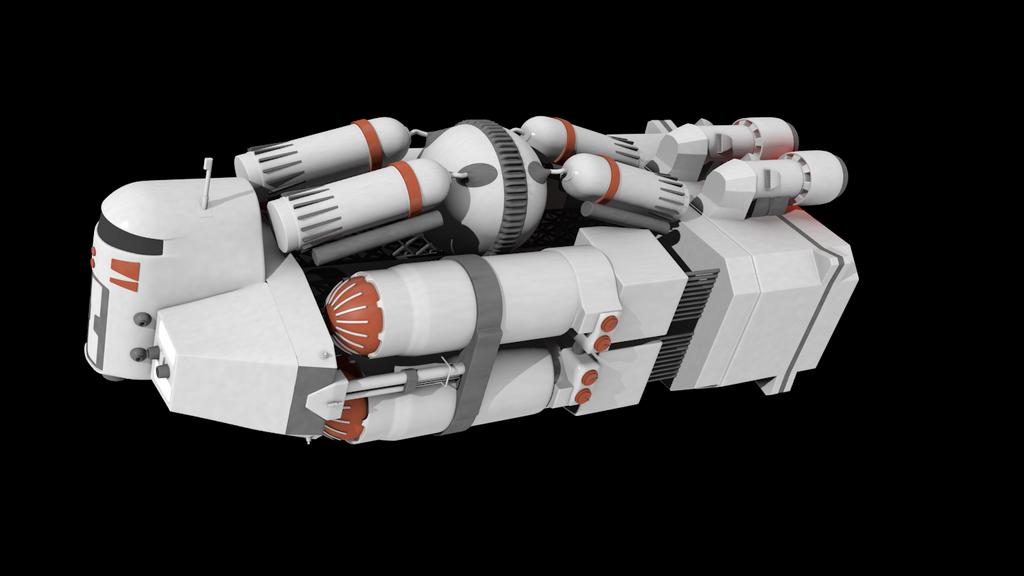 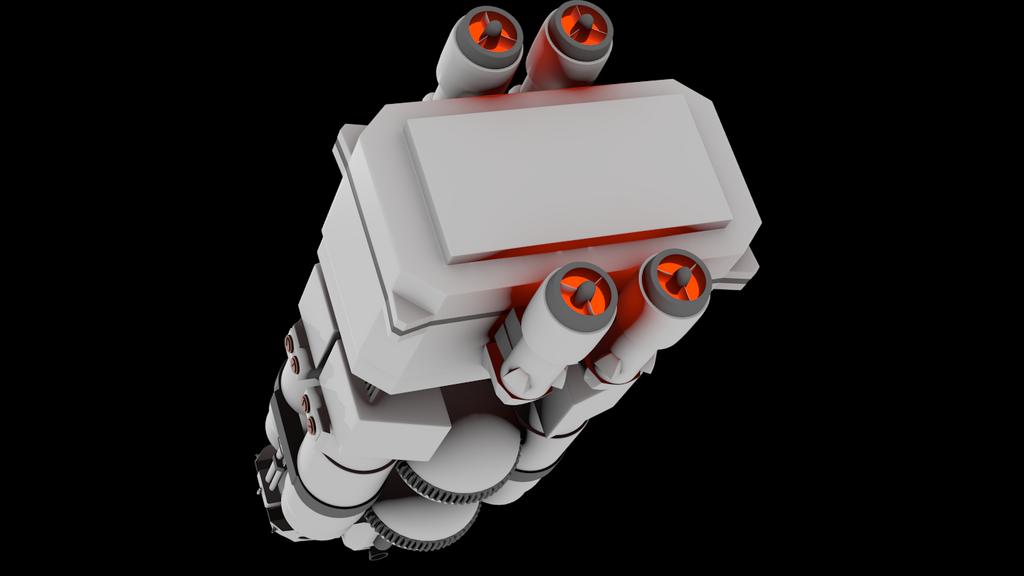 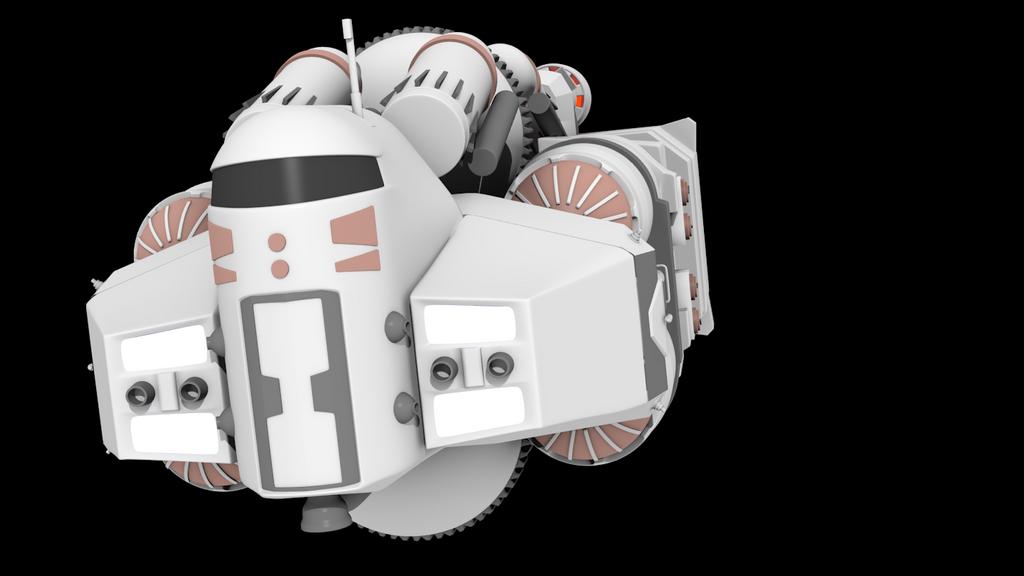 I found a new build of Blender for Mac on Graphicall.org that finally allows for rendering in Yafaray. I can’t believe it.

At any rate, it’s helped me to isolate that glow, while still giving me fairly fast render times.

Up next, UV texturing. As always, crits are welcome. 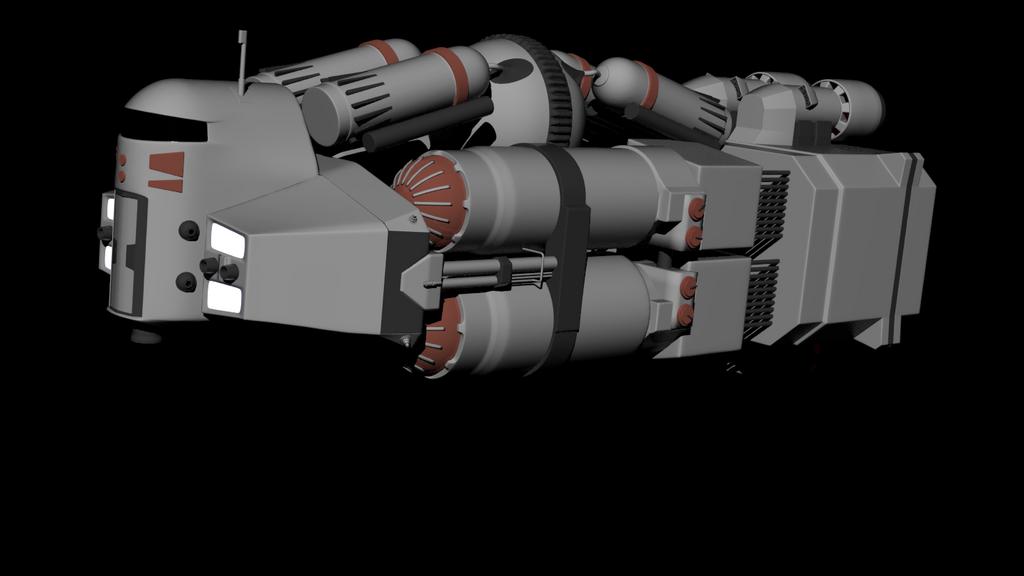 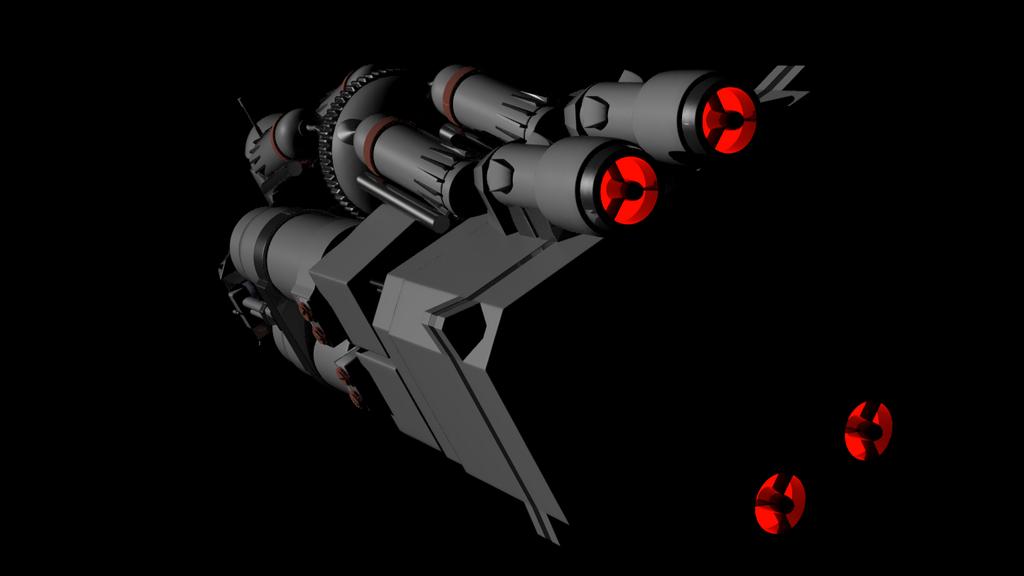 Here’s the ship! Thanks to everyone who helped me out in Focused Critique. As always, please let me know what you all think. Your feedback helps me improve. 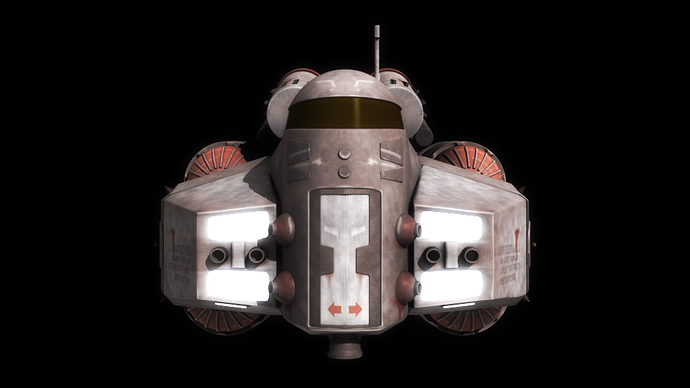 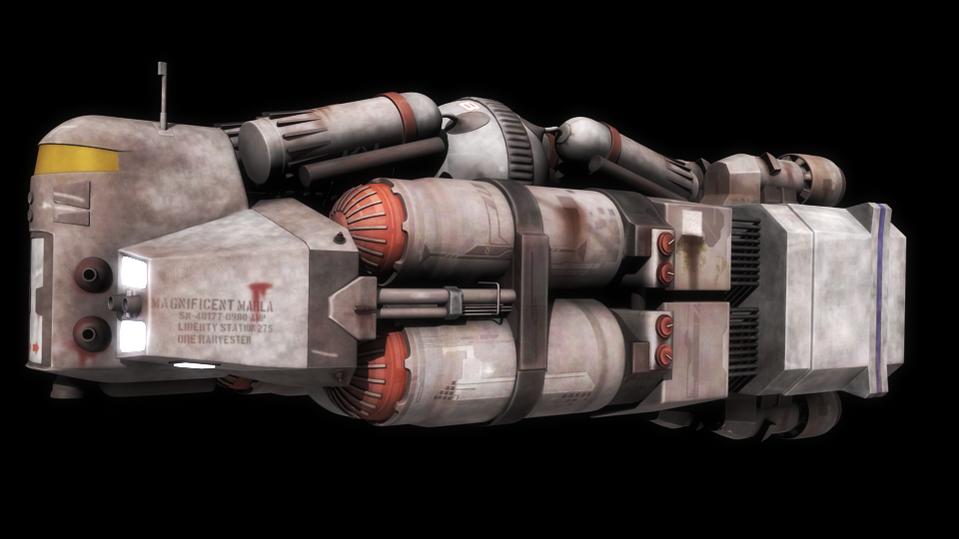 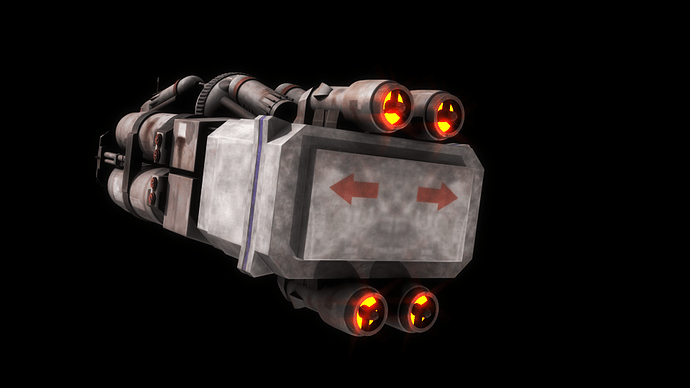 The renders of the ship is looking good.