I’d like to create hotkeys for Select Oriention (Global / Local / Normal…), so I can switch directly to a specific orientation.
Like pressing key 1 : Global, 2: Local, 3: Normal, etc…

The problem is that when I create a shortcut with transform.select_orientation, it actually opens the Select Orientation menu. So I have to press the key twice to switch: first to open the menu, then to select the orientation.

Any idea how to pass through the menu?

Should be able to set it from the user preferences 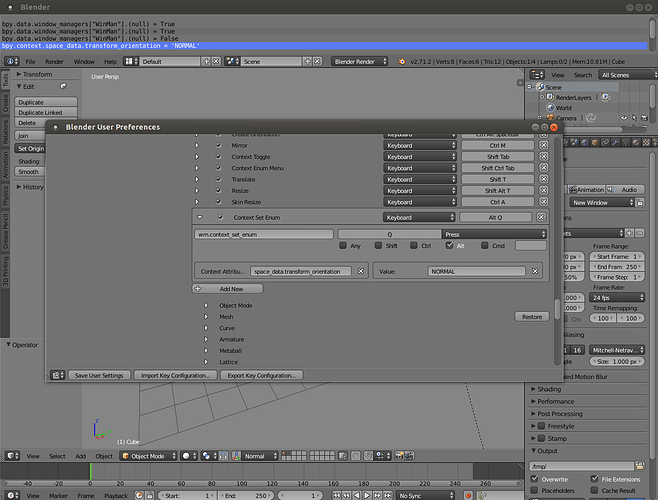 This has two problems: there aren’t many free hotkeys and custom transform orientation adds to the orientation list.

Ha, thanks for the tip!

For custom orientations I guess I can use the menu when I need them, that’s ok.

I think Blender uses way too many hotkeys (mainly because it’s missing icon shelves), so I completely changed my hotkey setup (pretty much going for something like maya, but making sure that it’s not conflicting with great blender advantages).

I know people don’t agree with that way of thinking, but hey, I just want to have a tool that I feel comfortable with. And Blender gives great customization possibilities, so why not use them ?

You can delete every single hotkey by running down the X’s on the right, or by unchecking the checkboxes next to each name.

I expect you already know that you can hit a number key and select from a menu anytime, even without a custom keybinding? In this case, alt spacebar opens the menu, 1-5 selects the standard transforms, 6-0 switches to the sixth through tenth custom entries on the list. The mouse wheel also scrolls through if you have more.

I am not sure that making custom hotkeys is the answer because the orientation has to be created and named before a hotkey can be assigned to it.

I understand that you don’t like to use your keyboard and prefer to use icons, so you don’t have to repeat that.

Hotkeys are faster, but I feel that it’s a bit too overwhelming at the beginning to have to learn all of them. And I know that without them, you’re missing a very big part of blender workflow.

And pie menus. I’m actually waiting for pie menus to switch between orientation axis like I’m used to do in maya.

I am an everyday maya user and I just want to have blender as my secondary 3d package, and slowly move completely to it. For now I’m trying to make it as close as possible to what I always use in maya, but making sure that I don’t completely break blender workflows, like the maya presets sometimes does.
I don’t try to convince anyone that it’s better. For me it’s just is. And I’m willing to spend the time to update my hotkeys, even add-on ones that require me to touch the python script, everytime there is an update or such.

I didn’t know about the numbers in the alt+spacebar menu, and I just tried it and can’t seem to find what you’re talking about… Numbers only look for functions with these numbers.

Also, it works fine for the common orientation since their name doesn’t change. It won’t with custom orientation, but to be honest I almost never used them in maya, so I might not use them on an everyday basis, even if I’m sure that they will be of great help sometimes!

Hmm I just tried with the factory settings and Alt Spacebar brings up the transform orientations menu for me. So it’s not a custom shortcut…

Ok I tried factory settings and I see it. Really have to press alt before space otherwise it opens the search menu first. Indeed it opens the menu I was talking about in my first post, which required me to press the shortcut twice. That menu will be perfect on my " ` " key