Shader glitches when camera is far

Edit: I solved this problem, but I have a new one, its in the next post

Hi everyone! Ive been replicating one of the hallways in Amnesia in preparation for a scene in my game, when i came across a problem with the shaders i was using. I get this strange effect where the shader starts to glitch at a certain distance, like the image shows. If i move the camera closer, it is fixed. I thought this was odd as some of the lights don’t glitch, so I’m not sure whats going on :). Here’s the blend file if you want to take a closer look at how i set things up, and hopefully this can be solved :).
Image: 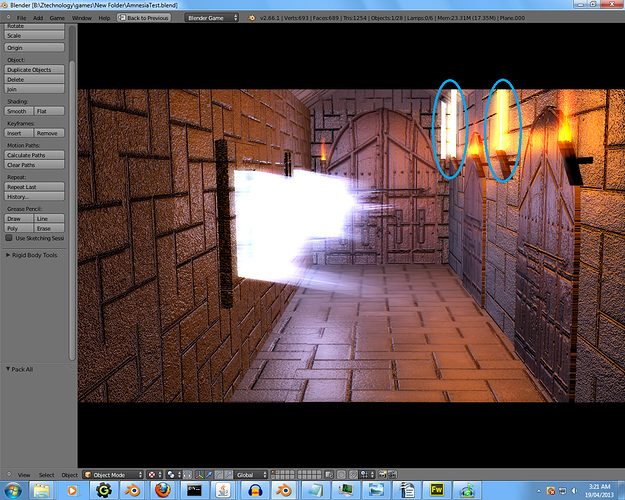 EDIT: Ive fixed the problem. Because the empties duplication of the group didnt carry over the logic bricks, the material never got the shaders effects. I just had to put one of the origional objects in the scene and it worked :D. It dosnt explain how some did, but at least it works :).

I also forgot to credit solar lune for the origional electricity shader. Ive tweaked it a little bit but overall its his, and its awesome!

Ok, I’ve come up with another problem in the same scene. I’ve tried to create a system where bits of the level are chunks and so I can duplicate and move them to create the level. This is all fine, until I started to duplicate the lights I used for the fire. The lights were very glitchy, and only worked in the viewport, not when I hit p. it was fine when I replaced them with another light, so the problem was sort of solved. Problem is, pretty much every object I duplicate and move to the layer my new level system was using glitches up, or mainly it becomes invisible. Ill post a blend file tomorrow, as its two in the morning here and I need to sleep lol

If anyone’s had this problem before, do you know how to fix it? Also if I’m unclear, the blend file will be up tomorrow

It’s actually not my shader - I readapted it from ATI’s RenderMonkey software, if I recall. You should credit them, really.

As for your second problem, I don’t think you can duplicate lights in-game. You can, though, move lights around. So,

I don’t think the problem is in the shader itself. I think that Blender or your video driver does not like what happens with the shaders related to the duplicated ‘torch’ group. I removed all the torches from the scene that were Empties duplicating the ‘torch’ Group and replaced them with some clones that I created by selecting the torch and doing “Shift-D” to make a duplicate Object. This did not suffer from the glitches.

thanks for all the replies, although i had already fixed it lol :D. Does anyone have any suggestions for the second question? Also, i think i was a little unclear :). I meant when i duplicate objects outside of the game in the editor, when i go into the game they usually act as if they don’t exist. Also, thanks solar lune for the extra crediting thing :D.