Sharpen Video in VSE (or other way in Blender?)

I’m doing a Star Wars fan documentary entirely with Blender, Gimp, and Inkscape. I’m doing it in HD, but I’m integrating a few snippets from low-res deleted scenes. I would like them to be smoothly mixed in, so it’s not so noticeable the source is different.

I cannot find any sharpening algorithms in the VSE (or through add-ons). Does anybody know how this could be achieved in Blender? Thanks as always. 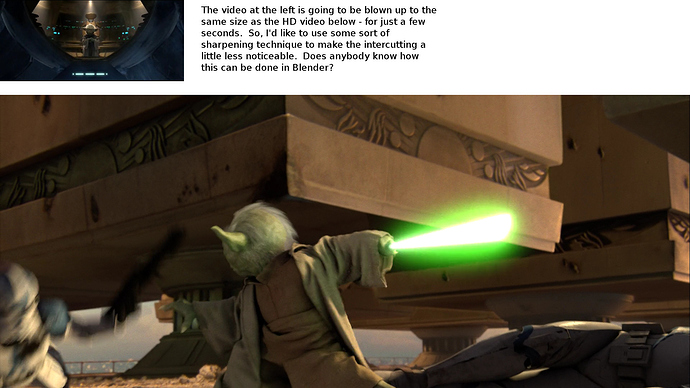 There is a new script that will send a VSE strip to a node scene and place it on the timeline as a scene strip. Not real time but you can render it first or as a proxy.

The script is at the bottom of my latest blog posting.

Thanks, 3PointEdit. (I’ve never used Nodes before, but at this stage in my learning of Blender, I’m seeing them referenced all the time, so I guess I’ve gotta bite the bullet and devote some time to that.)

Thank you also for your fine blog - though it’s often a bit too technical for my current knowledge. Just a few days ago, I downloaded the “Jump to” add-on for the VSE, and I expect it will be a good time-saver. I come across it regularly on my StartPage searches.

I will update this thread with step-by-step instructions and a “Solved” tag when I complete this.

On the PC side of things, Virtual Dub is a nice video utility that has a number of useful filters including sharpening. It’s free & Open Source, works with .avi files, recognizes most common codecs you may have on board, and plays very well with XviD, fwiw.

Thanks, chipmasque. I’m looking into it now.

VirtualDub looks cool - lean and full of functions, but it seems pretty darn limited in its codecs. I just randomly tried about eight different videos I have, and it only accepted one of them. But I’ll keep it in mind for future use, and let people know of it when the subject arises. Thanks a lot.

You might actually prefer to go the other way … downgrade the hi-res stuff to match the low-res original, because otherwise you are going to pick up noise. Plan on doing a “color timing” session at the end of the project regardless. But that’s later. The first step is to get the CG parts worked out, the placement in 3D space, razor sharp, in MultiLayer files, the usual schtick.

As for “nodes,” you are absolutely going to need to use nodes to do this, and … you’re going to love what they can do. This is really where Blender gets to pull off its kid gloves and show you that it’s a computer program, and that you’re not limited to “reality” if you don’t care to be. There is an entire world of artistic and technical creativity awaiting you.

Ansel Adams once said that “a photograph is taken in the camera, but it’s made in the darkroom.” And that’s very, very true. Nodes are what give you that “digital darkroom.” If you haven’t read Foundation Blender Compositing cover-to-cover, there’s a good place to start. (BTW: you now owe me a beer, Roger W…)

Thanks, sundialsvc4. I am indeed learning Nodes now. For this, I’m sort of copying along with this tutorial - http://www.youtube.com/watch?v=RbF0VL5FNsg&feature=plcp - from ‘Blend That Film’. (I actually needed to download the tutorial since the instructor didn’t do the voiceover in real-time, and so it goes extremely fast. So I need to be able to pause it and scrub through the video better than on Blender to see precisely what he’s doing.)

I just checked out the book you cited on Amazon. Unfortunately, I’m broke, so I can’t afford it no matter what. But it also looks like it’s arranged for 2.49, so maybe a quick update might be worth the author’s time. But the preview on Amazon looks good.

Thanks for talking up Nodes. It makes me more determined than ever to learn. 'Preciate it!

Do you know how I add the Node results to the VSE so that, in the VSE, I can crop it a bit? Or can I crop it with Nodes?

I see the Crop Node (Shift + A > Distort > Crop) but it’s not displaying anything in my preview Node or the Render window.

I still cannot crop this. It’s just showing up as all black. Is this a bug?

I’m not able to crop this. When I add the crop node, everything is black. Nothing shows up, no matter what I try. Does anybody know what I can do? Is this a Bug?

Can somebody please look at this for me? I cannot crop ANYTHING using Nodes. Image, movie, whatever. NOTHING shows up after the crop node is added.

Here’s another screencap. Is this a bug? I’m using 32-Bit Windows XP. 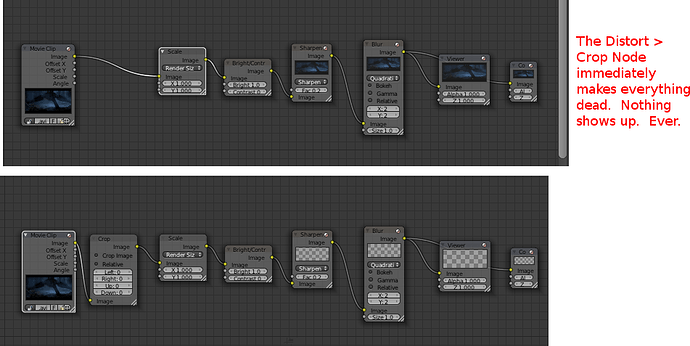 Still not getting anything, ever.

Crop Node
The Crop Node takes an input image and crops it to a selected region.

David, as you realize after halley’s posts above, the way the crop node works is very counter-intuitive. So, yes, it’s a feature!

I remember Sebastian complaining about crop node defaults in one of his tuts. Now that here’s very close to the developers maybe he can easily convince them to recode the crop node defaults to something more sensible. (Hey Sebastian, are you reading this?)

Now back to the topic. Nodes are the true power of Blender image processing-wise. At the moment they don’t integrate well with the VSE and that’s a major drawback. I second all suggestions made by others on this thread to study them. In principle, you should be able to sharpen footage with a very simple node setup.

The problem is that you cannot just go from low res to high res just like that, i.e. by using a simple sharpen filter. It’s not gonna work. Other programs have special tools which allow one to conver a low res to a high res clip (MBL has a tool called instant HD or sth - it’s for AE). Blender does not have any such tools readily available. In most cases you can create them using nodes following simple principles. In other cases complex algorithms are required so it’s more tricky. I’ve learned this the hard way trying to denoise footage with nodes.

My point is that going from low res to HD is not going to work well (if at all) with a simple sharpen node. In fact, sharpening is more likely to degrade image quality and introduce high levels of noise as sundialsvc4 suggested. What I’d recommend is using the low res clips without upscaling them. You may use a certain portion of the screen to show them there at their native resolution either on a black background or some sort of still from the movie (or whatever - you need to be creative in that regard). You can easily overlay one clip on the top of another in the VSE. I’m not sure if this might work for you considering what you have in mind but it will safeguard from encountering impossible problems in the next step.

Thanks for the suggestion. RKing (of here and BlenderQA) also helped out in this regard. Essentially, the way that certain directions (to think of it as N-E-S-W rather than X-Y) are controlled is kind of odd. So, like, to crop from the bottom, you basically but in the percentage of the image that you want to be there (let’s say 90%). But then you’d figure you could put in 90% from the top, too, but instead you have to go 1-.9, or .1. That probably doesn’t make much sense, but with the jump-start you and rking gave me (and Halley, too), I’ve made some progress…

…But I agree with BlenderComp that it’s totally unintuitive and odd. I can’t say that I’m a total video production expert, but I’ve used a good number of programs over the years and I never remember a simple crop or stretches being so weird.

Thanks for the suggestions about the final low-res to HD issues, BlenderComp. These are going to last maybe seven seconds of screen time, and so I think that, one way or another, it’s not going to be a huge deal. Actually, I’m doing this as much as an arbitrary project to teach myself as anything else. I’ll compare the sharpened and “enhanced” version with the original, and see which is better. But it’s not going to make-or-break the video, under either circumstance.