Just wanted to get some exposure for my first full Blender Game that is nearing completion. The game is called Singular Objective: Don’t Die. The game takes place around a black hole. The player controls a small scout vessel that is being constantly pulled into the singularity and must avoid being sucked in while battling alien craft and dodging asteroids. All 3D assets were created with blender and most textures were created with procedural textures and baked. Even the explosion sprite was made with blender smoke simulation.

The game features:
-Random spawn points for enemies and asteroids
-Constantly ramped up difficulty as more enemies are added to the spawn pool over time and new enemies are introduced
-Gravity around a point in space rather than a plane
-Temporal aiming reticle that shows the path of player bullets over time

Please let me know what you think based on the videos below and if anyone is interested in testing future builds. I am also wondering if anyone knows of a good way to distribute this game. I want it to be completely free and accessible to as many people as possible. Thanks in advance for any advice or criticism!

This looks to be a promising design! Some constructive criticism:

The Font object is quite low resolution. This is fixable with a python attribute, or by moving it away and scaling it. Doing this in an overlay scene will prevent it clipping existing geometry.

The crosshair icon seems out of place, and a little too chunky. I would make it white, and use similar hair sizes to the borders of the Hull and Fuel progress bars. In fact, I think it would look very nice if it was a small circle. Like this, but smaller and white.

Thanks for the advice! I thought I just had to accept the dynamic font as is, I will be sharpening it up now. I also see what you’re saying about the reticle and will look into refining it so that it matches the rest of my design.

I’ve posted this game as a concept on Steam Greenlight for everyone to check out:

Thanks for taking the time to look at my game!

Yes, a good project. Another constructive criticism: the resolution of asteroids is relatively poor. Use a LOD system (wait the 2.7 version) to have more details on nearest asteroids, and normal maps to fake details.
I hope i’ll play with it soon.

I can only record the video at very low resolution to keep any kind of decent framerate so that probably doesn’t help, but the asteroids have fairly high resolution maps for normals, specularity, and emission as well as diffuse. Here is a picture of them at 1080p: 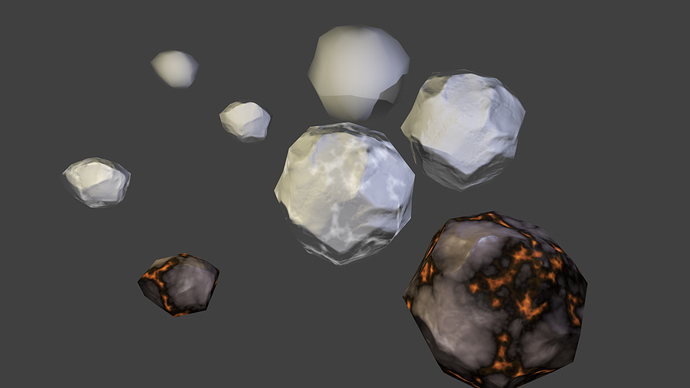 Do you think if the the video reflected this they would look better? I’m not sure the diffuse helps show the detail of the other maps and I may change it.