A real life animation that I modeled in Blender at the end of 2017. I got the idea after seeing an similar example of this from some Disney demonstration video. I thought how hard could it be, well pretty damned as it turns out. The Disney folks had written themselves a nice little piece of software to get their gears and levers all worked out for the proper animation-loop. I had to work it out myself first on the computer and then had to make adjustments again after I 3d-printed it, because I hadn’t accounted for all the play and give totaling up with all the axles, gears and material flex.

Anyway I got it to work in time for the Saint Nicolas celebration as a little prank for my sister. A mini-me for her to do help her with the days hard work and pushing back against the hands of time. Combined with the little solar panel I slapped together for it, the idea was that she could put it on the window sill and at first daylight it would start doing the daily grind for her.

I think it came together surprisingly well. I’m pleased I managed to combine the concepts of time, effort and her and her initial into one whole. In the end the joke was on me though, because this thing took me waaay to much time and effort and probably made me age prematurely

Here’s a little screengrab from the project. I started with working out the mechanism in linkage and used a gear-generator website to get me the correct gears and then started modeling all the parts. At first I planned on making it similar to the ones by Disney and on thingiverse, but then I figured out a way to mount everything on the central base plate.

One interesting thing I learned is that trying to create a quasi 2d profile of a female torso just doesn’t look right, which is why I modeled a more sculpted 3d torso, while keeping the rest in simplified profile perspective. Isn’t as visible on the screengrab as it is 3d printed. 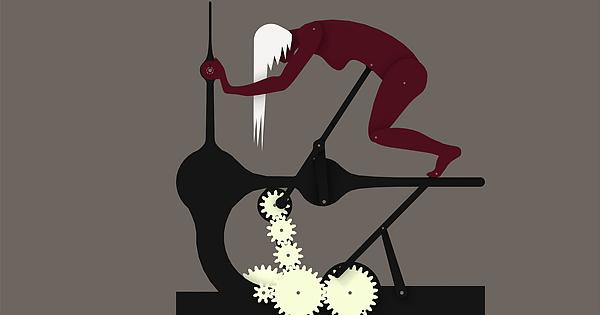 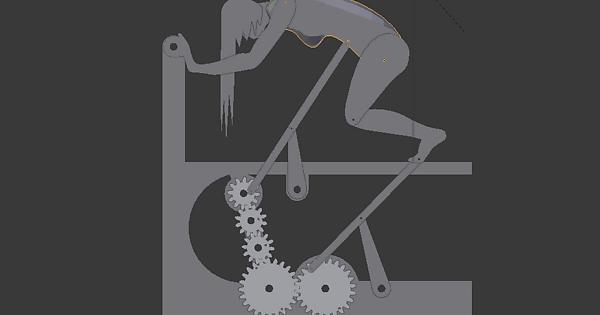 Awesome Idea and execution! I’ve seen the Disney Research hub videos on things like this before.
I have to try this my self! How did you figure out all the gears? Rig it in 3D and then adjust for the filament bend and flex after?

I setup a stick figure in the free program Linkage and worked out the motions and gears that way. Some things are pretty obvious, like the upper body needs to move with both legs and therefore it needs double the rotations. Diameter of the gears combined with the length of the arms dictate the range and size of the motion. Be warned though even just this sketch-like phase will take a lot of time and effort. I really wish that Disney had released their software. After I had it worked out, I placed the solution as a background image in blender and modeled everything. I did use a gear generator to give me the proper gear-teeth surfaces.

Couple of things I wish I had done differently.
First is to not go to the same extreme positions I did and leave yourself more room for some tolerances. If you aren’t planing to have all the joints and axes with very tight tolerances, you will need to give yourself some more room. I ended up cheating a little and hid something like a cam lobe in the belly of the figurine to prevent the upper body from falling down. In my case I really wanted to keep the extreme fatigue position. Most inaccuracy in my case was because I used pop-rivets as my joints and bearings. But even then you still need to also keep in mind that the little bit of movement between the two extreme positions of attached gears will add up with each gear. I could not tighten the tolerances in my gears any more because I couldn’t afford any more resistance with the rotation speed and amount of torque on the electrical motor I had and the size of the solarpanel I made for it. (Btw getting the rotation speeds lined up for the animation and the electrical motor was also quite a hassle)

Second thing is that I should have given myself more space on the big gears for mounting the rods. It just so happened to work out for my particular model and printsize, where I was able to place a mounting holes at the base of the tooth on the gear. If I had to print this model at say half the size, I suspect I would have run into issues. I underestimated the size of the gear teeth in “Linkage” probably because that application only shows them as a plain circle.

Thanks for that write up! I will try and keep your lessons learned if I can find time to make something like this. I bet this was far harder than it looks!

Nah man, how hard could it be?

There might be a reason why I didn’t look back on this project for over a year.