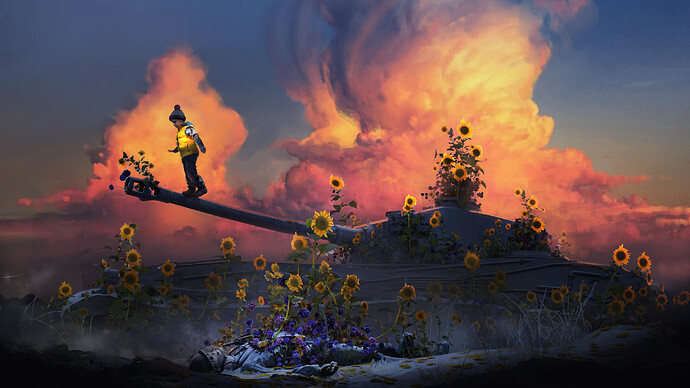 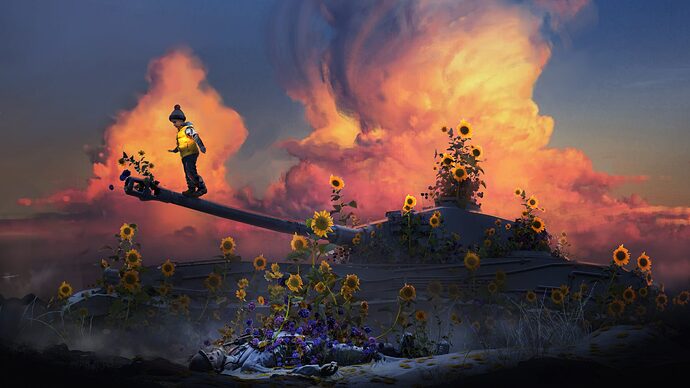 Nice (although a bit clichée).
Someone please tell the kid a tank is not a playground, and leftover ammo and duds are dangeous.

Thank you! can i ask you why do you think it’s a bit cliche’? (i mean the question, im really up for getting better at creating narrative illustrations in an original way)

It’s all 3d but the kid and the sky, with some heavy paintover after.

It’s all 3d but the kid and the sky, with some heavy paintover after.

I see. That’s what I would have guessed, your work has a painted feel/look to it. Which is fine of course.

(In fact I happen to currently make an illustration in a similar way. Using Blender for blockout, staging only and overpainting the primitive clayrender in Krita, that is. Funnily enough, my work is even thematically somewhat related.)

can i ask you why do you think it’s a bit cliche’?

Sure, no problem. What I mean was this: One might read a few things into the elements shown in your work.

I believe it’s not necessarily that binary in the real world.
E.g. during the Great Purge/Terror during Stalin’s dictatorship in the 1930ies, it was anything but unheard of for children to rat out (denuciate, rather) their own parents. Of course people of all ages denunciated their neighbours, relatives, colleagues, workers, anybody at the time.

I guess it goes without saying blooming flowers as a symbol of peace aren’t the most original idea. What about replacing the flowers by birds, many birds sitting on the tank, pothentially having it covered in excrements? (That last aspect is a bit corny, maybe.) Could be white pigeons (a clichée within itself, I guess), could be ravens, for a darker tone.
Don’t even mind me, I’m just throwing around ideas.

But yes, of course I see the symbolism in the colors you choose, and I like the palette in your work . So I’m not trying to say this flowerpower-subtext makes the picture bad.

I rather wonder, could some more nuance have been added? Maybe a (unexploded ordnance/land mine) warning sign in the background (which might fit the palette in yellow/black yellow/red anyway)?
Or how about the kid holding a toy rifle (it’d be important to make it clearly identifiable as a toy, pothentially selfmade)?
Kids (probably boys in particular) tend to play with such things (maybe even more often if in regions of war or other active armed conflict).

I believe the movie ‘Lord of War’ does this right in so far it doesn’t hold back on mentioning this (kind of perverted) variant of childplay.
There’s that scene when arms runner Nicolas Cage throws away his son’s plastic toy revolver, later to be found by interpol in his trashbin.
There’s also that other scene in which Cage gets driven through Monrovia by Andrew Babtista Jr., and they pass by a bunch of hoodlumbs holding AK-47 replicas made from wire.

Now my apologies for the wall of text, but at least I can say you asked.

Anyway, I like your work, especially the clouds are very well done!

As far as I know, art is subjective, the beauty of art is precisely touching each person in an individual way, my interpretation was very different from yours, I think you had a somewhat arrogant approach with our colleague, if every artist had to explain the meaning of his art, art would not be funny, as it would become an exact science… his comments and criticisms reveal more about what goes on in his mind, than perhaps what the auter really tried to convey… and this It’s the interesting thing about art.

my interpretation was very different from yours, I think you had a somewhat arrogant approach

Well ok, that’s fine with me. On the other hand isn’t what you refer to as arrogant ironically your interpretation of my words either?

Anyway, I tried to answer a question, that is all. As I said: There is no need to mind me or the thoughts I shared at all.

I dont think it was arrogant if it makes it better, i like receiuving opinions. Altho i must admit that the sunflowers idea comes from an accident in UA where a woman suggested a soldier to put sunflower in his pocket, so at least something beautiful would born from his body once he died in foreign land.

Cool art but i don’t think the Russians ever used Tiger 2 tanks.

Yes, I may have misinterpreted… sorry.
Anyway I don’t take back what I said about explaining the art, I hope you understand this point at least.

@Natan_Pereira: It’s all good, no need to apologize. I do not mean to ‘explain the art’, nor do I claim to hold some kind of definite interpretation.
You are right, it’s for anyone to make up their mind about it and anyone may interpret it as they see fit.