Smooth cone with glossy or anisotropic texture gets dark spot

I’m using a basic cone, point down with HDRI lighting. When using a Glossy or Anisotropic material, and setting the cone shading to smooth, the bottom tip of the cone renders black - not unlike the lead on the tip of a pencil. This goes away if I set shading to Flat, but then the faces are obvious. I’m ok with the tip of the cone being rounded - in fact that is desired. I thought this was an issue of lighting (and it may yet be), but after trying several other Environment HDRI Textures, and adding in lamps shining at the dark spots, the dark tip seems to remain.

Any idea how I can fix this? I’ve tried searching the forums here and the internet at large for a solution, but I’m afraid my noobie verbage isn’t helping me locate or recognize the info I need.

Much thanks from a blender noob. 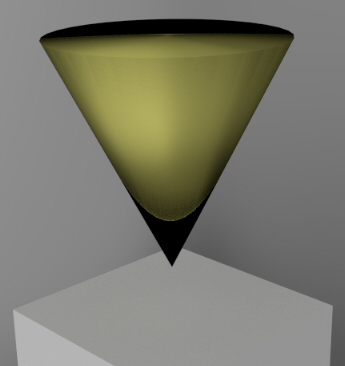 Could you provide the .blend file ?
This way we could have a look and find what you are doing wrong more easily.

I really appreciate your help.

change mat to diffuse and there is not dark band at bottom of cone!

Even with the cube gone it still happens. This is the actual project I’m working on, and there are no other objects beyond the 7 pipes. The scenario above was just a simple way of showing the problem I am experiencing, default file with the cone, smoothing applied, and shiny material. When the objects are rotated, so the light is coming from different angles, the dark spot is still in the same location on the object. 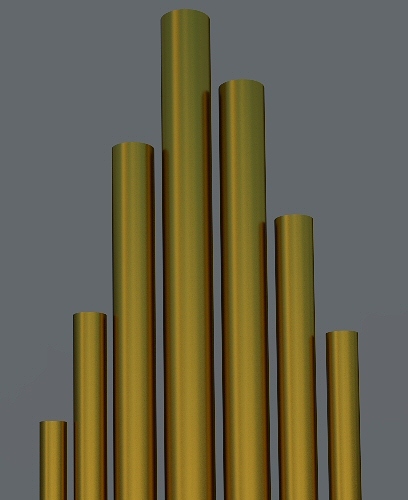 I think the problem is the extremely sharp, pointy end of that pipes/cones in conjunction with the Anisotropic Shader.

No real world object could be constructed to taper into an infinitesimally small point. As soon as you bevel that bottom end point into something more realistic, the shading artefacts vanish. To help Cycles even further, you can add vertical subdivisions, additional edge loops to avoid elongated narrow polygons, which tend to cause shading errors. 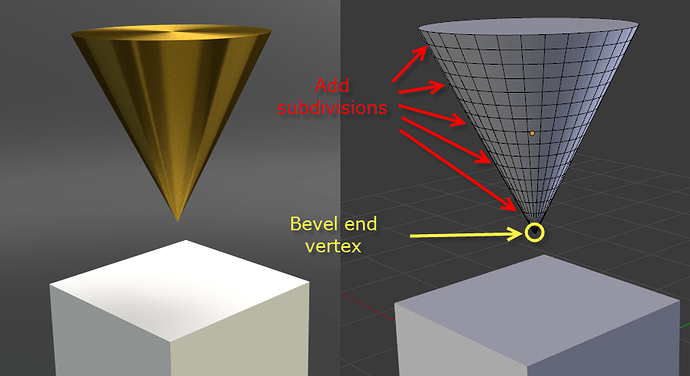 not certain but I think there may be a bug for this aniso mat !
and if it has been corrected yet

try if to make end not so sharp!

explain why do you need the aniso mat here ?
just use a glossy mat !

Excellent, thanks so much to all of you. I should be able to fix this now.

Also, to answer your question RickyBlender, I was using the aniso for the surface where the pipe was cut. In the tutorial I watched on Youtube they said something along the lines of an aniso mat without some settings (I don’t remember now what exactly it was) would function similarly to a regular glossy metal, so I just used a copy of that node setup for the rest of the pipe - which probably wasn’t the smartest approach.

Last I want to apologize for the delay in my responses, as a noob I’m still subject to post moderation.

Thanks again, so very much!