I’m playing around as a newbie in blender. and I’m trying to understand about reflections on smooth shading surfaces.
I’m trying to make my logo shiny glossy and reflective from a SVG file I have imported. So I’ve converted my logo into
mesh from curves, and then limited dissolve to make all the mesh lines more simple. My question is

A) why does a smooth shading surfaces get more reflections and gloss rather than a flat surface? I’ve added both results on the same logo. 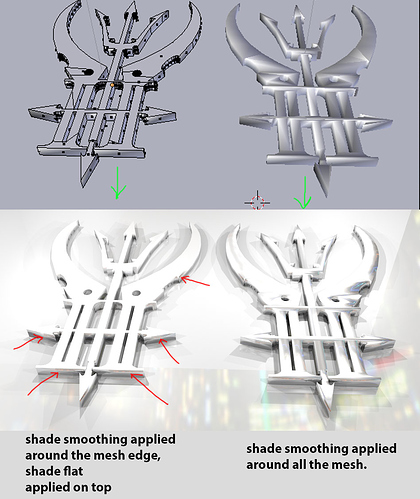 Sorry but this question is different from my other question. This question states the difference between between smooth shading
and flat shading on meshes on regarding the reflections, and is the result is due to SVG related file, rather than modelling in blender. And also I forgot to mention this post here, I have added a world with an Image to emit reflections onto both meshes, my previous post has just the meshes alone.

Smooth shading does effect how light reacts on a mesh. That’s why we have something like loop cuts. Shade smooth is mainly used to even out round edges, we use loop cuts to get semi sharp angles, this in turn helps to make lighting look better on objects in general.

On your model you have to add loop cuts “ctrl+r” on the edges to get a better result for the lighting on the sides of your model. Smooth shading ignores sharp edges unless you add doubles or loop cuts.

A) why does a smooth shading surfaces get more reflections and gloss rather than a flat surface?

A.
It doesn’t. An old render rule of thumb says: “Give reflective surfaces something to reflect.”. In your case you seem to have used a white lumigon directly above the logo, so it’s only natural that the reflection of the flat top section is flat white, while the sides partly reflect the coloured background.

B.
Smooth shading will almost always produce strange results when applied to a flat surface. You have used smooth shading on the entire sideline of that mesh, which doesn’t make sense, since most surfaces on that sideline are flat anyway (the arrowheads, for example, or the whole bottom part). You should have only applied smooth shading on the curved parts. This is where the Edge Split modifier would have been the far superior alternative, imho, since it deals with these factors automatically.

you can also in edit mode do some verts smoothing on some faces which might help!

Hello Xelus, thanks for that analytical reply! Your info gave me a good insight of a better understanding of how the reflections result on a mesh.

I come from Lightwave and there, you would simply lower the smoothing angle of the surface, (material), to say 30 degrees to avoid over smoothing of flat areas. I can’t seem to find an equivalent in Blender though, choosing smooth shading for an object always gives it “full on” shading as in your issue. You could always apply an edge split modifier, that seems to give a similar effect to a lower smoothing angle.

Hi Colkai, the problem I’m having with edge split is I cannot control the angle, so I’m getting either just the flat surface as you can see on the left hand side of the mesh, or its either the right hand side of the mesh in the example I posted. edge split tends to make the surface completely flat. I think Its due because the mesh has bad mesh to it, due to its an imported SVG file I have created in Abode Illustrator.

Hi Colkai, the problem I’m having with edge split is I cannot control the angle…

I understand that this project is already going on for quite some time and that there are several threads concerning the genesis of this logo - frankly, I didn’t bother to read through all of them. So I’m sorry if this question has already been answered, but what increasingly keeps bothering my mind is: Why convert that original SVG curve to mesh at all? Wouldn’t using the curve extrusion / beveling tools have been the easier way, like, not having to worry about topology and getting nice edge bevels on top for free?

Workflow as in your case: SVG to Blender. 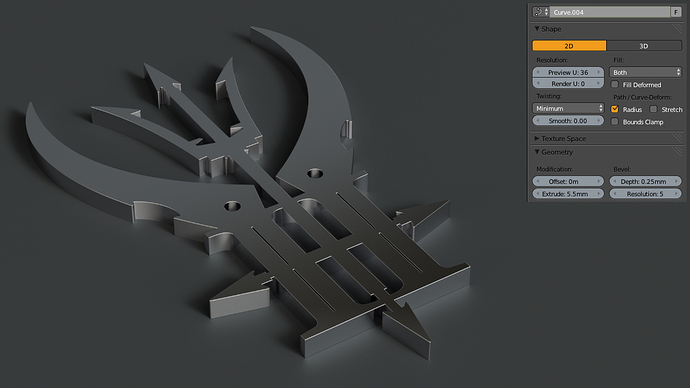 Thanks for that technique info, Ill be practising with the curve extrusion method. The result seems very satisfactory.