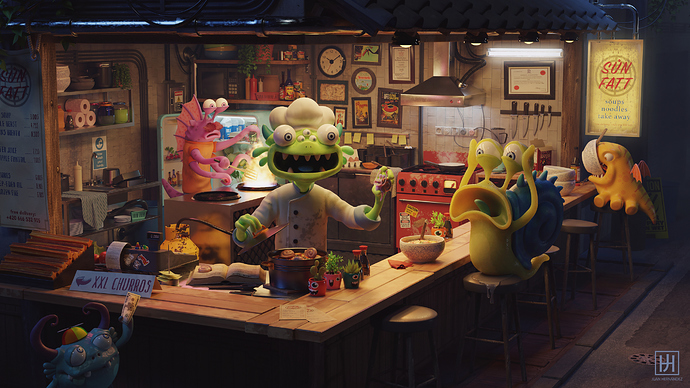 Snail Souprise is by the moment my newest illustration. All the models and texturing were done in Blender and the scene was rendered in Cycles at 2000 samples. This is also my first scene done in Blender 2.8, even when being still in beta, lots of it’s features came really in handy.

Here there are some close up shots: 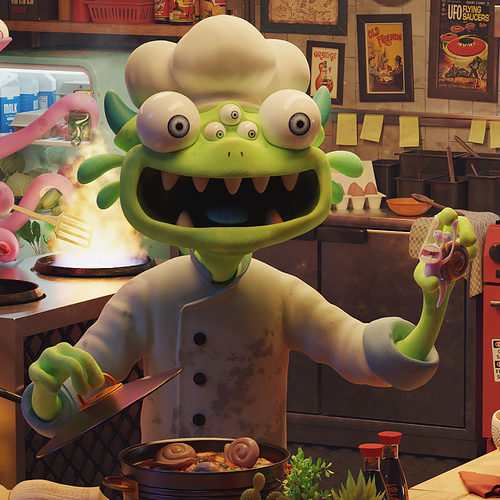 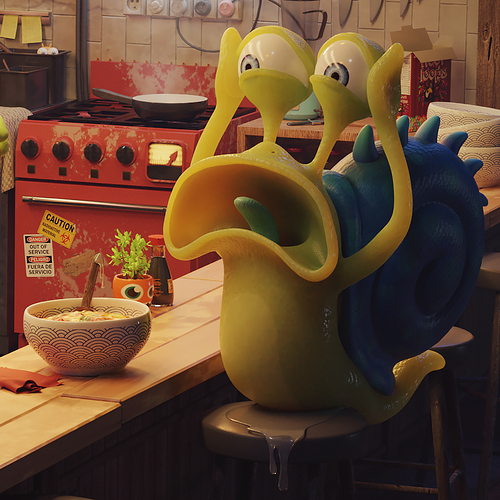 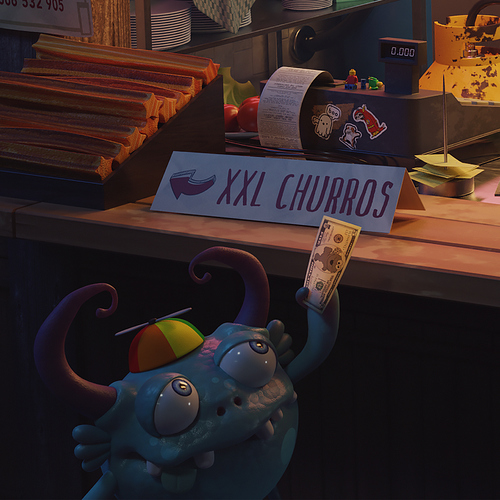 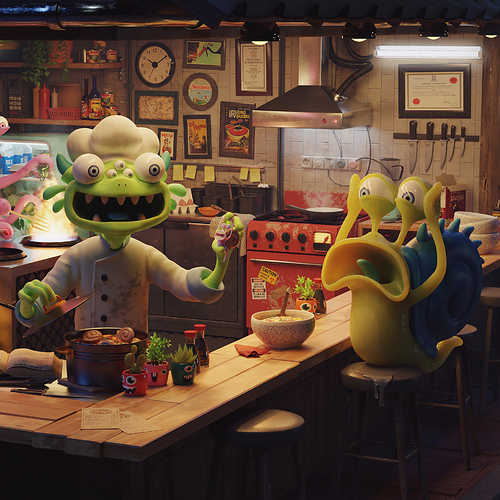 This was also a great opportunity to try out Blender’s new cryptomatte passes. Thou I basically only did some color correction and added some small effects like glow or darker areas, cryptomatte passes were a great way to mask out anything I needed, without the need of putting in an specific layer and rendering it out again. They look like this: 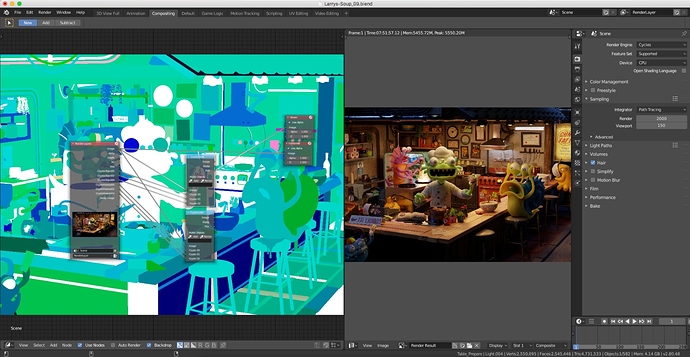 Here is a caption of my scene in Blender: 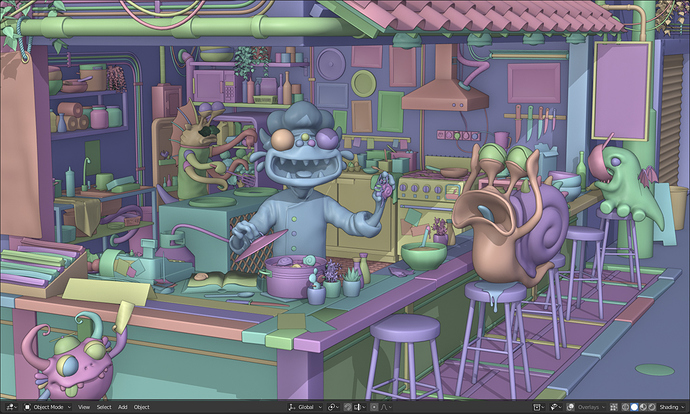 One last thing… just out of curiosity, there are 7 characters in the scene… I just wonder if people have noticed the 7th one… he is the smallest, but I would say similarly as the snail in the cook’s hand.

Everything is beautiful with this scene, great work!

I just wonder if people have noticed the 7th one

And I got the sneaky one

It took some searching, but I found # 7 too!

this is really more than fantastic,
there is details in every corner in this render and thy are amazingly awesome !!!

Haha great! you found him!

I like how you added the spoiler alert button, nice!. And thanks very much for the opinion

Thanks! I did my best

Hey this is a splendind work indeed. Beautiful shot that is pierced with so many great and catchy details. Really good job! By the way what is a spec of your rig that you worked on for this project?

!
I am glad you appreciate the details

. I am working with a 4 GHz Intel Core i7, 16GB of RAM and a NVIDIA GeForce GTX 970 4095 MB. Unfortunately the scene was quite big and at the beginning rendering with my graphic card was actually slower for some reason… and later on the scene exceeded the card memory so I did the final render through CPU.

They are decent specs, it is no beast, but enough to be able work properly. But I am thinking about getting some kind of monster GPU if possible 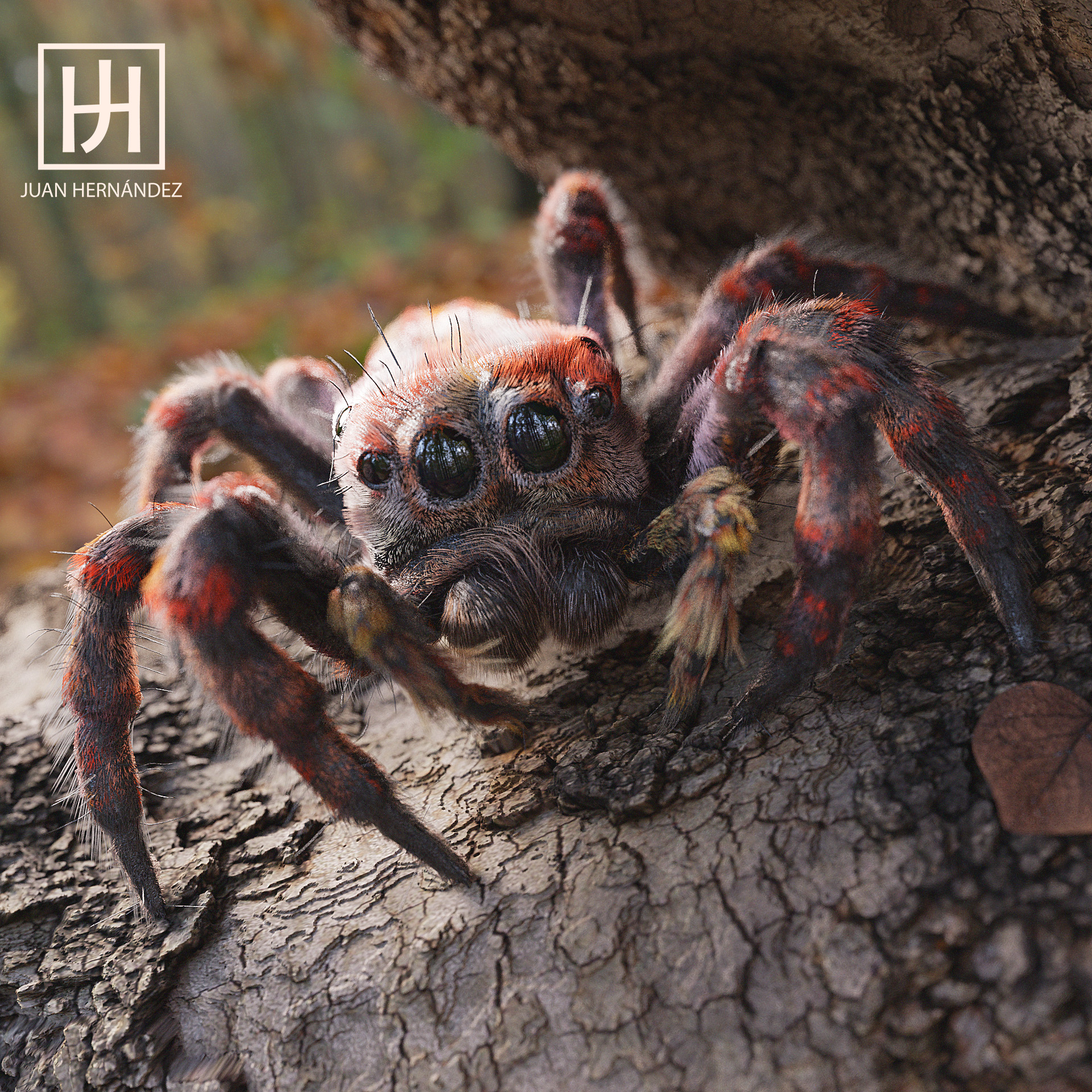 Every week, hundreds of artists share their work on the Blender Artists forum. I'm putting some of the best work in the spotlight in a weekly post here on BlenderNation. Spider In The Woods Summer path White Interior * (with a different taste)...

Besides the 7th character I also found that the paper rolls on the left shelf have embossed pattern in the bottom which looks bit weird. I presume it’s not supposed to be there considering amazing level of detail elsewhere.

It’s just such an outstanding amount of work to LOOK at I can imagine this is one of those projects you never thought was truly done. Stickers on the cash register!? That’s a detail alone that would escape 95% of the artists out there.

It’s fun, it’s wild and it’s a good balance of where to spend two hours and where to use Import Image as Plane! Bravo, man!

where’s 6 and 7?
UPDATE
Nevermind! I found 6 and 7.
I think 7 is a couple of eyeballs in the pot and 6 is pretty small. Didn’t blow up the picture all the way earlier

This was really inspiring. What a composition and colors! Love your characters.
Would be happy to see more!

this render is sooo phenomenal I absolutely love it!

Awesome Bart, Thanks very much!

Thanks for the comment! and regarding your feedback all I can say is: https://media.giphy.com/media/KUOPgSNoKVcuQ/giphy.gif

Thanks, next time I am gonna be more careful with small things, yes I somehow moved the uv by accident.

Thanks for the comment, I appreciate you looking and finding these small details

Haha yes import image as plane is a powerful tool

it is specially nice since I was experimenting with the position of the stickers quite a lot, so having them masked out in a node system seemed unnecessary.